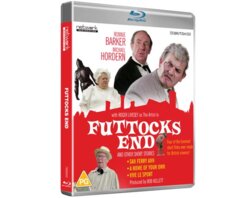 Win a copy of Futtocks End & Other Short Stories on Blu-ray
Competition Discussion
Sorry, but you are not eligible to enter this competition. You do not have the necessary permission to enter competitions.
You are a member of user group(s): Member - 0 - Unregistered / Unconfirmed.
The winner will be announced here after the closing date on Friday July 30, 2021.
NETWORK

Futtocks End and Other Short Stories

ON BLU-RAY, DVD & DIGITAL FROM JULY 5
​
New to Network Distributing’s The British Film label this summer, comes a release that will take you on a silly and psychedelic trip through 1960s British comedy with Futtocks End and Other Short Stories from prolific director, producer and writer Bob Kellett.

A notable presence in the British film industry throughout the 1960s-70s, Bob Kellett was known for directing classic British comedy feature film spin-offs, including Up Pompeii and its sequels (1971-72) with Frankie Howerd, The Alf Garnett Saga (1972) with Warren Mitchell and Are You Being Served? (1977) with John Inman. Futtock’s End and Other Short Stories was his foray into fiction films and includes a collection of four of the funniest short films ever made for British comedy.

A HOME OF YOUR OWN
A young couple select a site to build their new dream home, setting in train a series of incompetent events!

SAN FERRY ANN
A hilariously wicked look at the British at play, as a group of holidaymakers board the San Ferry Ann to France.

FUTTOCKS END
A gathering at the decaying country pile of Futtocks End give rise to an ongoing series of saucy misunderstandings!

VIVE LE SPORT
Two swinging dolly-birds roar through Europe in their Mini Cooper, with a sinister organization in hot pursuit!

Futtocks End and Other Short Stories is presented here as a brand-new High-Definition restoration from their original elements in their as-exhibited theatrical aspect ratios by Networks’ award-winning in-house team. Making itsBlu-ray and Digital debut, it contains a host of special features including newly recorded interviews.


​
Futtocks End and Other Short Stories is available on Blu-ray/DVD and Digital from Amazon Prime from 5th July
Pre-order now: www.networkonair.com 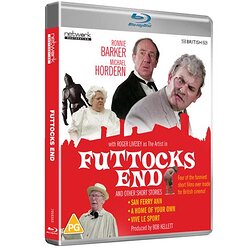