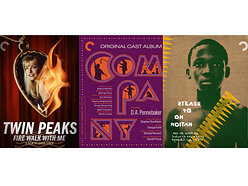 Win a copy of Criterion's September Titles on Blu-ray
Competition Discussion
Sorry, but you are not eligible to enter this competition. You do not have the necessary permission to enter competitions.
You are a member of user group(s): Member - 0 - Unregistered / Unconfirmed.
The winner will be announced here after the closing date on Friday October 08, 2021.
The Criterion Collection and Sony Pictures Home Entertainment are delighted to release three new titles in September 2021

We are giving YOU a chance to win a copy of ALL of them on Blu-ray™!​

TWIN PEAKS: FIRE WALK WITH ME

In the town of Twin Peaks, everyone has their secrets—but especially Laura Palmer (SHERYL LEE). In this prequel to his ground-breaking 1990s television series, DAVID LYNCH (Eraserhead) resurrects the teenager found wrapped in plastic at the beginning of the show, following her through the last week of her life and teasing out the enigmas that surround her murder. Homecoming queen by day and drug-addicted thrill seeker by night, Laura leads a double life that pulls her deeper and deeper into horror as she pieces together the identity of the assailant who has been terrorizing her for years. Nightmarish in its vision of an innocent torn apart by unfathomable forces, Twin Peaks: Fire Walk with Me is nevertheless one of Lynch’s most humane films, aching with compassion for its tortured heroine—a character as enthralling in life as she was in death.

This holy grail for both documentary and theatre aficionados offers a tantalizingly rare glimpse behind the Broadway curtain. In 1970, right after the triumphant premiere of the ground-breaking concept musical Company by STEPHEN SONDHEIM (West Side Story), the renowned composer, his director HAROLD PRINCE, the show’s stars, and a large pit orchestra all went into a Manhattan recording studio as part of a time-honoured Broadway tradition: the recording of the original cast album. What ensued was a marathon session in which, with the pressures of posterity and the coolly exacting Sondheim’s perfectionism hanging over them, all involved pushed themselves to the limit—including theatre legend ELAINE STRITCH (30 Rock), who fought anxiety and exhaustion to record her iconic rendition of “The Ladies Who Lunch.” With thrilling immediacy, legendary filmmaker D. A. PENNEBAKER (Dont Look Back) offers an up-close view of the larger-than-life personalities, frayed-nerve energy, and explosive creative intensity that go into capturing the magic of live performance.

BEASTS OF NO NATION

The nightmare of war is seen through the eyes of one of its most tragic casualties—a child soldier— in this harrowing vision of innocence lost from CARY JOJI FUKUNAGA (True Detective). Based on the acclaimed novel by Uzodinma Iweala, Beasts of No Nation unfolds in an unnamed, civil war-torn West African country, where the young Agu (ABRAHAM ATTAH, in a haunting debut performance) witnesses carnage in his village before becoming the captive of a band of rebel soldiers led by a ruthless commander (an explosive IDRIS ELBA [The Wire]), who moulds the boy into a hardened killer. Fukunaga’s relentlessly roving camera work and stunning visuals—realism so intensely visceral it borders on the surreal—immerse the viewer in a world of unimaginable horror without ever losing sight of the powerful human story at its centre.

The Criterion Collection and Sony Pictures Home Entertainment present TWIN PEAKS: FIRE WALK WITH ME and ORIGINAL CAST ALBUM: COMPANY - D. A. PENNEBAKERI on 13th September, and BEASTS OF NO NATION on 27th September, on Blu-ray™ 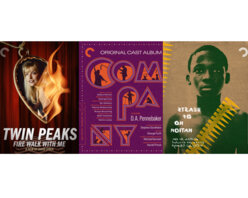