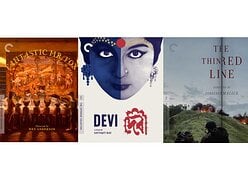 Win a copy of Criterion's November Titles on Blu-ray
Competition Discussion
Sorry, but you are not eligible to enter this competition. You do not have the necessary permission to enter competitions.
You are a member of user group(s): Member - 0 - Unregistered / Unconfirmed.
The winner will be announced here after the closing date on Friday December 10, 2021.
The Criterion Collection and Sony Pictures Home Entertainment are delighted to release three new titles in November 2021

Master filmmaker SATYAJIT RAY (The Apu Trilogy) explores the conflict between fanaticism and free will in Devi (The Goddess), issuing a subversively modern challenge to religious orthodoxy and patriarchal power structures. In the waning days of mid-nineteenth-century India’s feudal system, after his son (Apur Sansar’s SOUMITRA CHATTERJEE) leaves for Kolkata to complete his studies, a wealthy rural landowner (The Music Room’s CHHABI BISWAS) is seized by the notion that his beloved daughter-in-law (The Hero’s hauntingly sad-eyed SHARMILA TAGORE) is the reincarnation of the goddess Kali—a delusion that proves devastating to the young woman and those around her. The opulently stylized compositions and the chiaroscuro lighting by cinematographer Subrata Mitra (Charulata) heighten the entrancing expressionistic intensity of this domestic tragedy, making for an experience that is both sublime and shattering.

After directing two of the most extraordinary movies of the 1970s, Badlands and Days of Heaven, American artist TERRENCE MALICK disappeared from the film world for twenty years, only to resurface in 1998 with this visionary adaptation of James Jones’s 1962 novel about the World War II battle for Guadalcanal. A big-budget, spectacularly mounted epic, The Thin Red Line is also one of the most deeply philosophical films ever released by a major Hollywood studio, a thought-provoking meditation on man, nature, and violence. Featuring a cast of contemporary cinema’s finest actors—SEAN PENN (Dead Man Walking, Milk), NICK NOLTE (The Prince of Tides, Affliction), ELIAS KOTEAS (Zodiac, The Curious Case of Benjamin Button), and WOODY HARRELSON (Natural Born Killers, The People vs. Larry Flynt) among them—The Thin Red Line is a kaleidoscopic evocation of the experience of combat that ranks as one of cinema’s greatest war films. 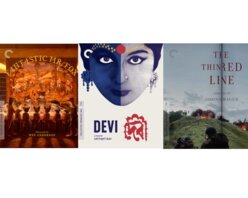