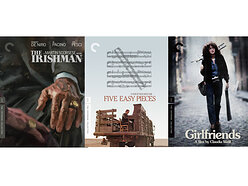 Win a copy of Criterion's November Titles on Blu-ray
Competition Discussion
Sorry, but you are not eligible to enter this competition. You do not have the necessary permission to enter competitions.
The winner will be announced here after the closing date on Thursday December 03, 2020.
The Criterion Collection and Sony Pictures Home Entertainment are delighted to add three new titles in November 2020 and we are giving YOU a chance to win a copy of ALL of them on Blu-ray™.

MARTIN SCORSESE’s cinematic mastery is on full display in this sweeping crime saga, which serves as an elegiac summation of his six-decade career. Left behind by the world, former hit man and union truck driver Frank Sheeran (Taxi Driver’s ROBERT DE NIRO) looks back from a nursing home on his life’s journey through the ranks of organized crime: from his involvement with Philadelphia mob boss Russell Bufalino (Goodfellas’ JOE PESCI) to his association with Teamsters union head Jimmy Hoffa (The Godfather’s AL PACINO) to the rift that forced him to choose between the two. An intimate story of loyalty and betrayal writ large across the epic canvas of mid-twentieth-century American history, The Irishman (based on the real-life Sheeran’s confessions, as told to writer Charles Brandt for the book I Heard You Paint Houses) is a uniquely reflective late-career triumph that balances its director’s virtuoso set pieces with a profoundly personal rumination on aging, mortality, and the decisions and regrets that shape a life.

When her best friend and roommate abruptly moves out to get married, Susan (Thirtysomething’s MELANIE MAYRON), trying to become a gallery artist while making ends meet as a bar mitzvah photographer on Manhattan’s Upper West Side, finds herself adrift in both life and love. Could a new job be the answer? What about a fling with a married, older rabbi (The Magnificent Seven’s ELI WALLACH)? A wonder of American independent filmmaking whose remarkably authentic vision of female relationships has become a touchstone for makers of an entire subgenre of films and television shows about young women trying to make it in the big city, this 1970s New York time capsule from CLAUDIA WEILL (It’s My Turn) captures the complexities and contradictions of women’s lives and relationships with wry humor and refreshing frankness.

Read the Official AVF Review of The Irishman