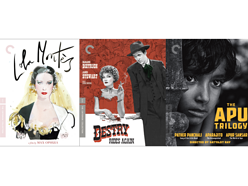 Win a copy of Criterion's May Titles on Blu-ray
Competition Discussion
This competition has now ended. The lucky winners of this competition are displayed below.
The Criterion Collection and Sony Pictures Home Entertainment are delighted to add three new titles in May 2020 and we are giving YOU a chance to win a copy of ALL of them on Blu-ray™.

Lola Montès is a visually ravishing, narratively daring dramatization of the life of the notorious courtesan and showgirl, played by Martine Carol. With his customary cinematographic flourish and, for the first time, vibrant colour, Max Ophuls charts Montès’s scandalous past through the bombastic ringmaster (Peter Ustinov) of the American circus where she ends up performing. Ophuls’s final film, Lola Montès is at once a magnificent romantic melodrama, a meditation on the lurid fascination with celebrity, and a meticulous, one-of-a-kind movie spectacle.

MARLENE DIETRICH (Blonde Venus) and JAMES STEWART (Vertigo) ride high in this superb comedic western, both a boisterous spoof and a shining example of the genre it is having fun with. As the brawling, rough-and-tumble saloon singer Frenchy, Dietrich shed her exotic love-goddess image and launched a triumphant career comeback, while Stewart cemented his amiable everyman persona, in his first of many westerns, with a charming turn as a gun-abhorring deputy sheriff who uses his wits to bring law and order to the frontier town of Bottleneck. A sparkling script, a supporting cast of virtuoso character actors, and rollicking musical numbers — delivered with unmatched bravado by the magnetic Dietrich — come together to create an irresistible, oft-imitated marvel of studio-era craftsmanship.

Two decades after its original negatives were burned in a fire, SATYAJIT RAY’s breathtaking milestone of world cinema rises from the ashes in a meticulously reconstructed new restoration. The Apu Trilogy brought India into the golden age of international art-house film, following one indelible character, a free-spirited child in rural Bengal who matures into an adolescent urban student and finally a sensitive man of the world. These delicate masterworks—Pather Panchali (Song of the Little Road), Aparajito (The Unvanquished), and Apur Sansar (The World of Apu)—based on two books by Bibhutibhusan Banerjee, were shot over the course of five years, and each stands on its own as a tender, visually radiant journey. They are among the most achingly beautiful, richly humane movies ever made—essential works for any film lover. 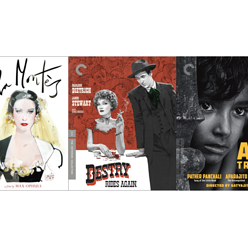