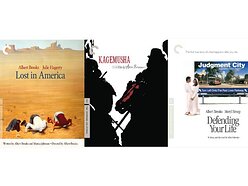 Win a copy of Criterion's March Titles on Blu-ray
Competition Discussion
This competition has now ended. The lucky winners of this competition are displayed below.
The Criterion Collection and Sony Pictures Home Entertainment are delighted to add three new titles in March 2021.
We are giving YOU a chance to win a copy of ALL of them on Blu-ray™.

Open Exclusively to Patreon Supporters​
Available on March 8, Akira Kurosawa's masterpiece KAGEMUSHA is a historical epic that is also a mediation on the power of nature. Following on March 29, two releases from writer and director Albert Brooks. LOST IN AMERICA is a hysterical satire on Reagan-era values, a high point in the string of restless comedies about insecure characters searching for satisfaction in the modern world that established Brooks' unique comic voice. DEFENDING YOUR LIFE is a rare feat of personal, philosophical filmmaking that happens to also be divinely entertaining.

When a warlord dies, a peasant thief is called upon to impersonate him, and then finds himself haunted by his spirit as well as his own ambitions. With his late colour masterpiece Kagemusha, Akira Kurosawa returned to the samurai film and to a primary theme of his career—the play between illusion and reality. Sumptuously reconstructing the splendour of feudal Japan and the pageantry of war, Kurosawa creates a historical epic that is also a meditation on the nature of power.

In this hysterical satire of Reagan-era values, written and directed by ALBERT BROOKS (Modern Romance), a successful Los Angeles advertising executive (Brooks) and his wife (Airplane’s JULIE HAGERTY) decide to quit their jobs, buy a Winnebago, and follow their Easy Rider fantasies of freedom and the open road. When a stop in Las Vegas nearly derails their plans, they’re forced to come to terms with their own limitations and those of the American dream. Brooks’s barbed wit and confident direction drive Lost in America, a high point in the string of restless comedies about insecure characters searching for satisfaction in the modern world that established his unique comic voice and transformed the art of observational humour.

Is there love after death? Acerbic everyman ALBERT BROOKS (Lost in America) finds a perfect balance between satirical bite and romantic comedy charm as the writer, director, and star of this wonderfully warm and imaginative existential fantasy. After he dies suddenly, the hapless advertising executive Daniel Miller (Brooks) finds himself in Judgment City, a gleaming way station where the newly deceased must prove they lived a life of sufficient courage to advance in their journey through the universe. As the self-doubting Daniel struggles to make his case, a budding relationship with the uninhibited Julia (The French Lieutenant’s Woman’s MERYL STREEP) offers him a chance to finally feel alive. Buoyed by a brilliant supporting cast that includes RIP TORN, LEE GRANT, and BUCK HENRY, Defending Your Life is a rare feat of personal, philosophical filmmaking that happens to also be divinely entertaining.

The Criterion Collection and Sony Pictures Home Entertainment present Kagemusha on 8th March, and Lost in America and Defending Your Life on 29th March, on Blu-ray™ 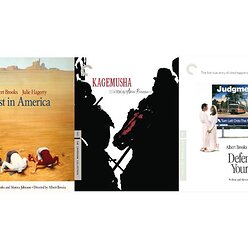