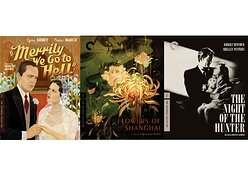 Win a copy of Criterion's June Titles on Blu-ray
Competition Discussion
Sorry, but you are not eligible to enter this competition. You do not have the necessary permission to enter competitions.
You are a member of user group(s): Member - 0 - Unregistered / Unconfirmed.
The winner will be announced here after the closing date on Saturday July 10, 2021.
The Criterion Collection and Sony Pictures Home Entertainment are delighted to add three new titles in June 2021 and we are giving YOU a chance to win a copy of ALL of them on Blu-ray™.


MERRILY WE GO TO HELL

Addiction, nonmonogamy, and female sexual liberation: decades before such ideas were widely discussed, DOROTHY ARZNER (Dance, Girl, Dance), the only woman to work as a director in 1930s Hollywood, brought them to the screen with striking frankness, sophistication, and wit—a mature treatment that stands out even in the pre-Code era. A Star Is Born’s FREDRIC MARCH (in one of four collaborations with Arzner) and SYLVIA SIDNEY (Sabotage) turn in extraordinary performances as the urbane couple whose relationship is pushed to the breaking point by his alcoholism and wandering eye—leading them into an emotionally explosive experiment with an open marriage. Exposing the hypocrisies and petty cruelties simmering beneath the surface of high-society elegance, Merrily We Go to Hell is a scathing early feminist commentary on modern marriage.

An intoxicating, time-bending experience bathed in the golden glow of oil lamps and wreathed in an opium haze, this gorgeous period reverie by HOU HSIAO-HSIEN (The Assassin) traces the romantic intrigue, jealousies, and tensions swirling around four late-nineteenth-century Shanghai “flower houses,” where the courtesans live confined to a gilded cage, ensconced in opulent splendour but forced to work to buy back their freedom. Among the regular clients is the taciturn Master Wang (In the Mood for Love’s TONY LEUNG CHIU-WAI), whose relationship with his long time mistress (The Mystery of Rampo’s MICHIKO HADA) is roiled by a perceived act of betrayal. Composed in a languorous procession of entrancing long takes, Flowers of Shanghai evokes a vanished world of decadence and cruelty, an insular universe where much of the dramatic action remains tantalizingly offscreen—even as its emotional fallout registers with quiet devastation.

THE NIGHT OF THE HUNTER

The Night of the Hunter—incredibly, the only film the great actor CHARLES LAUGHTON ever directed— is truly a standalone masterwork. A horror movie with qualities of a Grimm fairy tale, it stars a sublimely sinister ROBERT MITCHUM (Cape Fear, The Friends of Eddie Coyle) as a traveling preacher named Harry Powell (he of the tattooed knuckles), whose nefarious motives for marrying a fragile widow, played by SHELLEY WINTERS (A Place in the Sun, The Diary of Anne Frank) are uncovered by her terrified young children. Graced by images of eerie beauty and a sneaky sense of humour, this ethereal, expressionistic American classic—also featuring the contributions of actress LILLIAN GISH (Intolerance, Duel in the Sun) and writer JAMES AGEE—is cinema’s quirkiest rendering of the battle between good and evil.


The Criterion Collection and Sony Pictures Home Entertainment present MERRILY WE GO TO HELL and FLOWERS OF SHANGHAI on 14th June, and THE NIGHT OF THE HUNTER on 28th June, on Blu-ray™ 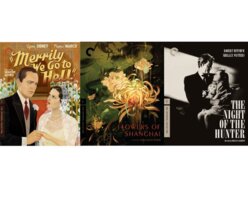