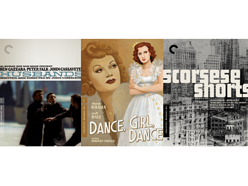 Win a copy of Criterion's June Titles on Blu-ray
Competition Discussion
This competition has now ended. The lucky winners of this competition are displayed below.
The Criterion Collection and Sony Pictures Home Entertainment are delighted to add three new titles in June 2020 and we are giving YOU a chance to win a copy of ALL of them on Blu-ray™.

The trailblazing independent auteur JOHN CASSAVETES (Opening Night) pushes his raw, uncompromising emotional realism to its limit in this unflinching portrait of masculinity in crisis. Cassavetes joins BEN GAZZARA (Anatomy of a Murder) and PETER FALK (Mikey and Nicky)—both of whom would become key collaborators of the director’s—playing a trio of middle-aged Long Island family men who, following the sudden death of their best friend, channel their grief into an epic, multiday bender that takes them from Manhattan to London in a desperate, debauched quest to feel alive. By turns painfully funny and woundingly perceptive, this self-described “comedy about life, death, and freedom” stands as perhaps the most fearless, harrowingly honest deconstruction of American manhood ever committed to film.

DOROTHY ARZNER (Christopher Strong), the sole woman to work as a director in the Hollywood studio system of the 1930s and early ’40s, brings a subversive feminist sensibility to this juicily entertaining backstage melodrama. A behind-the footlights look at friendship, jealousy, and ambition in the ruthless world of show business, Dance, Girl, Dance follows the intertwining fates of two chorus girls: a starry-eyed dancer (The Quiet Man’s MAUREEN O’HARA) who dreams of making it as a ballerina and the brassy gold digger (a scene-stealing LUCILLE BALL) who becomes her rival both on the stage and in love. The rare Hollywood film of the era to deal seriously with issues of female artistic struggle and self-actualization, Arzner’s film is a rich, fascinating statement from an auteur decades ahead of her time.

This compilation of five early short films by MARTIN SCORSESE (Taxi Driver) offers a fascinating window onto his artistic development. Spanning the years from Scorsese’s time at NYU in the mid-1960s to the late ’70s, when he was emerging as one of the era’s most electrifying talents, Scorsese Shorts centers on the intimate home movie Italianamerican—a loving snapshot of the director’s parents—and American Boy, a freewheeling portrait of a larger-than-life raconteur. Also included are The Big Shave, a daringly visceral response to America’s involvement in Vietnam, and the bracing student films What’s a Nice Girl Like You Doing in a Place Like This? and It’s Not Just You, Murray! Touching on many of Scorsese’s key themes— Italian American identity, family, his beloved New York City—these are hilarious, candid, and illuminating works from the preeminent American filmmaker of our time. 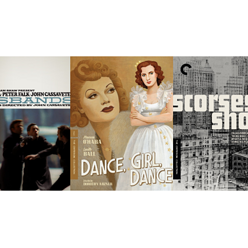