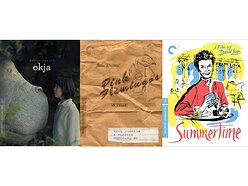 Win a copy of Criterion's July Titles on Blu-ray
Competition Discussion
This competition has now ended. The winners will be announced here shortly.
The Criterion Collection and Sony Pictures Home Entertainment are delighted to release three new titles in July 2022

Master genre exploder BONG JOON HO (Parasite) swirls pathos, dark satire, action, and horror into an exhilarating twenty-first-century fairy tale. An all-star cast including TILDA SWINTON (The French Dispatch), PAUL DANO (There Will Be Blood), STEVEN YEUN (Minari), and JAKE GYLLENHAAL (Spider-Man: Far from Home) is led by AN SEO HYUN (The Housemaid) as Mija, a South Korean girl growing up on an Edenic mountainside with her grandfather and best friend: Okja, a giant, empathetic “superpig” created as part of a secret GMO experiment. When Okja is abruptly torn away from her, Mija embarks on a perilous rescue mission that places her at the center of a sinister corporate conspiracy. While Bong’s trademark virtuosic set pieces dazzle, Okja’s beating heart is the connection between a girl and her superpig, made all the more poignant by the brilliant special effects that bring the animal star to unforgettable life.

JOHN WATERS (Hairspray) made bad taste perversely transcendent with the forever shocking counterculture sensation Pink Flamingos, his most infamous and daring cinematic transgression. Outré diva DIVINE (Female Trouble) is iconic as the wanted criminal hiding out with her family of degenerates in a trailer outside Baltimore while reveling in her tabloid notoriety as the “Filthiest Person Alive.” When a pair of sociopaths (MINK STOLE and DAVID LOCHARY) with a habit of kidnapping women in order to impregnate them attempt to challenge her title, Divine resolves to show them and the world the true meaning of the word filthy. Incest, cannibalism, shrimping, and film history’s most legendary gross-out ending—Waters and his merry band of Dreamlanders leave no taboo unsmashed in this gleefully subversive ode to outsiderhood, in which camp spectacle and pitch-black satire are wielded in an all-out assault on respectability.

With this sublimely bittersweet tale of romantic longing, director DAVID LEAN (Lawrence of Arabia) left behind the British soundstage to capture in radiant Technicolor the sunsplashed glory of Venice at the height of summer. In a tour de force of fearless vulnerability, KATHARINE HEPBURN (The Philadelphia Story) embodies the conflicting emotions that stir the heart of a lonely, middle-aged American tourist who is forced to confront her deep-seated insecurities when she is drawn into a seemingly impossible affair with a charming Italian shopkeeper (South Pacific’s ROSSANO BRAZZI) amid the ancient city’s canals and piazzas. Lean’s personal favorite among his own films, Summertime is an exquisitely tender evocation of the magic and melancholy of a fleeting, not-quite-fairy-tale romance.

The Criterion Collection and Sony Pictures Home Entertainment present OKJA on 18th July 2022 and PINK FLAMINGOS and SUMMERTIME on 25th July 2022, on Blu-ray™ 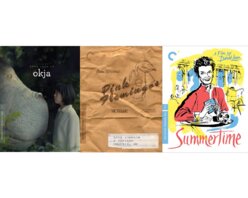