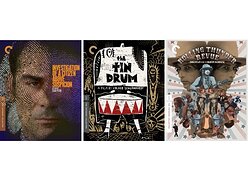 Win a copy of Criterion's January Titles on Blu-ray
Competition Discussion
Sorry, but you are not eligible to enter this competition. You do not have the necessary permission to enter competitions.
The winner will be announced here after the closing date on Sunday February 07, 2021.
The Criterion Collection and Sony Pictures Home Entertainment are delighted to add three new titles in January 2021 and we are giving YOU a chance to win a copy of ALL of them on Blu-ray™.

Investigation of a Citizen Above Suspicion

The provocative Italian filmmaker ELIO PETRI’s most internationally acclaimed work is this remarkable, visceral, Oscar-winning thriller. Petri maintains a tricky balance between absurdity and realism in telling the Kafkaesque tale of a Roman police inspector (A Fistful of Dollars’ GIAN MARIA VOLONTÉ, in a commanding performance) investigating a heinous crime—which he committed himself. Both a penetrating character study and a disturbing commentary on the draconian crackdowns by the Italian government in the late 1960s and early ’70s, Petri’s kinetic portrait of surreal bureaucracy is a perversely pleasurable rendering of controlled chaos.

Oskar is born in Germany in 1924 with an advanced intellect. Repulsed by the hypocrisy of adults and the irresponsibility of society, he refuses to grow older after his third birthday. While the chaotic world around him careers toward the madness and folly of World War II, Oskar pounds incessantly on his beloved tin drum and perfects his uncannily piercing shrieks. The Tin Drum, which earned the Palme d’Or at Cannes and the Academy Award for best foreign-language film, is a visionary adaptation from VOLKER SCHLÖNDORFF (Young Törless) of Nobel laureate Günter Grass’s acclaimed novel, characterized by surreal imagery, arresting eroticism, and clear-eyed satire.

In 1975, in an America defined by both the self-mythologizing pomp of the upcoming bicentennial and ongoing socio-political turmoil, BOB DYLAN and a band of troubadours—including luminaries such as JOAN BAEZ, ALLEN GINSBERG, and JONI MITCHELL—embarked on a now-legendary tour known as The Rolling Thunder Revue, a freewheeling variety show that was part traveling counterculture carnival, part spiritual pilgrimage. Director MARTIN SCORSESE (The Irishman) blends behind-the-scenes archival footage, interviews, and narrative mischief, with a magician’s sleight of hand, into a zeitgeist-defining cultural record that is as much a concert “documentary” as it is a slippery, chimerical investigation into memory, time, truth, and illusion. At the centre of it all is the magnetic Dylan, a sphinx-like philosopher-poet singing, with electrifying conviction, to the soul of an anxious nation.

The Criterion Collection and Sony Pictures Home Entertainment present Investigation of a Citizen Above Suspicion and The Tin Drum on 18th January, and Rolling Thunder Revue on 25th January, on Blu-ray™ 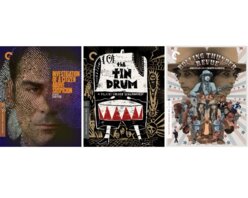