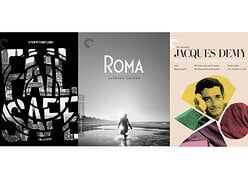 Win a copy of Criterion's February Titles on Blu-ray
Competition Discussion
Sorry, but you are not eligible to enter this competition. You do not have the necessary permission to enter competitions.
The winner will be announced here after the closing date on Wednesday March 11, 2020.
The Criterion Collection and Sony Pictures Home Entertainment are delighted to add three new titles in February 2020 and we are giving YOU a chance to win a copy of ALL of them on Blu-ray™.

With his eighth and most personal film, ALFONSO CUARÓN (Children of Men) recreated the early-1970s Mexico City of his childhood, narrating a tumultuous period in the life of a middle-class family through the experiences of Cleo (YALITZA APARICIO, in a revelatory screen debut), the indigenous domestic worker who keeps the household running. Charged with the care of four small children abandoned by their father, Cleo tends to the family even as her own life is shaken by personal and political upheavals. Written, directed, shot, and coedited by Cuarón, Roma is a labor of love with few parallels in the history of cinema, deploying monumental black-and white cinematography, an immersive soundtrack, and a mixture of professional and nonprofessional performances to shape its author’s memories into a world of enveloping texture, and to pay tribute to the woman who nurtured him.

This unnerving procedural thriller painstakingly details an all-too-plausible nightmare scenario in which a mechanical failure jams the United States military’s chain of command and sends the country hurtling toward nuclear war with the Soviet Union. Working from a contemporary best seller, screenwriter WALTER BERNSTEIN (The Front) and director SIDNEY LUMET (Network) wrench harrowing suspense from the doomsday fears of the Cold War era, making the most of a modest budget and limited sets to create an atmosphere of clammy claustrophobia and astronomically high stakes. Starring HENRY FONDA (12 Angry Men) as a coolheaded U.S. president and WALTER MATTHAU (Charade) as a trigger-happy political theorist, Fail Safe is a long-underappreciated alarm bell of a film, sounding an urgent warning about the deadly logic of mutually assured destruction.

French director JACQUES DEMY didn’t just make movies — he created an entire cinematic world. Demy launched his glorious feature filmmaking career in the sixties, a decade of astonishing invention in his national cinema. He stood out from the crowd of his fellow New Wavers, however, by filtering his self-conscious formalism through deeply emotional storytelling. Fate and coincidence, doomed love, and storybook romance surface throughout his films, many of which are further united by the intersecting lives of characters who either appear or are referenced across titles. Demy’s films—which range from musical to melodrama to fantasia—are triumphs of visual and sound design, camera work, and music, and they are galvanized by the great stars of French cinema at their centers, including ANOUK AIMÉE, CATHERINE DENEUVE, and JEANNE MOREAU. The works collected here, made from the sixties to the eighties, touch the heart and mind in equal measure. They include Lola, Bay of Angels, The Umbrellas of Cherbourg, The Young Girls of Rochefort, Donkey Skin and Une Chamber En Ville. 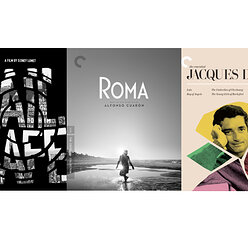