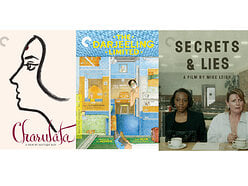 Win a copy of Criterion's April titles on Blu-ray

Win a copy of Criterion's April titles on Blu-ray
Competition Discussion
This competition has now ended. The winners will be announced here shortly.
The Criterion Collection and Sony Pictures Home Entertainment are delighted to add three new titles in April 2021 and we are giving YOU a chance to win a copy of ALL of them on Blu-ray™.

This film about a woman’s artistic and romantic yearning by SATYAJIT RAY (The Music Room) is set in late nineteenth-century, pre-independence India. It takes place in the gracious home of a liberal-minded, workaholic newspaper editor and his lonely, stifled wife, Charulata (The Big City’s MADHABI MUKHERJEE), whose exquisitely composed features mask a burning creativity. When her husband’s poet cousin comes to stay with them, Charulata finds herself both inspired by him to pursue her own writing and dangerously drawn to him physically. Based on a novella by the great Rabindranath Tagore, Charulata is a work of subtle textures, a delicate tale of a marriage in jeopardy and a woman taking the first steps toward establishing her own voice.

Writer-director MIKE LEIGH (Naked) reached new levels of expressive power and intricacy in his ongoing contemplation of unembellished humanity with this resonant exploration of the deceptions, small and large, that shape our relationships to those we love. When Hortense (RoboCop’s MARIANNE JEAN-BAPTISTE), a Black optometrist who was adopted as a child, begins the search for her birth mother, she doesn’t expect that it will lead her to Cynthia (Pride & Prejudice’s BRENDA BLETHYN, winner of the Cannes Film Festival’s best actress award), a desperately lonely white factory worker whose tentative embrace of her long-lost daughter sends shock waves through the rest of her already fragile family. Born from a painstaking process of rehearsal and improvisation with a powerhouse ensemble cast, Secrets & Lies is a Palme d’Or–winning tour de force of sustained tension and catharsis that lays bare the emotional fault lines running beneath the surface of everyday lives.

In The Darjeeling Limited, from director WES ANDERSON (Rushmore, Fantastic Mr. Fox), three estranged American brothers reunite for a meticulously planned, soul-searching train voyage across India, one year after the death of their father. For reasons involving over-the-counter painkillers, Indian cough syrup, and pepper spray, the brothers eventually find themselves stranded alone in the middle of the desert—where a new, unplanned chapter of their journey begins. Featuring a sensational cast, including OWEN WILSON (Armageddon, Wedding Crashers), ADRIEN BRODY (The Thin Red Line, The Pianist), JASON SCHWARTZMAN (Rushmore, HBO’s Bored to Death), and ANJELICA HUSTON (Prizzi’s Honor, The Grifters), The Darjeeling Limited is a visually dazzling and hilarious film that takes Anderson’s work to richer, deeper places than ever before.


The Criterion Collection and Sony Pictures Home Entertainment present Charulata on 5th April, and Secrets & Lies and The Darjeeling Limited on 26th April, on Blu-ray™ 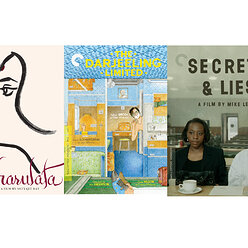