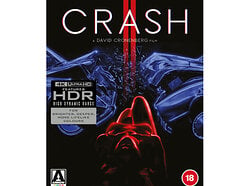 Win a copy of Crash on 4K Ultra HD Blu-ray

Win a copy of Crash on 4K Ultra HD Blu-ray
Competition Discussion
This competition has now ended. The winners will be announced here shortly.
CRASH

Spader stars as James Ballard, a film producer whose deviant sexual desires are awakened by a near fatal automobile accident with Dr Helen Remington (Hunter). Soon the pair, alongside Ballard’s wife Catherine (Deborah Kara Unger), are drawn into an underground world of car crash fetishism presided over by renegade scientist Vaughan (Elias Koteas). Danger, sex and death become entwined as eroticism and technology join together in a disturbing, deadly union.

Awarded the Special Jury Prize at the 1996 Cannes Film Festival for originality, daring and audacity, Crash remains an incredibly subversive and confrontational piece of cinema – Cronenberg himself describes it as “a dangerous film” – now newly refurbished in a stunning 4K restoration.


To celebrate the release we are giving YOU a chance to win a copy on 4K UHD! 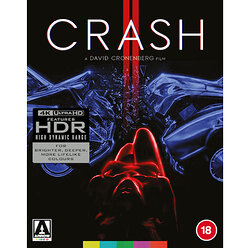