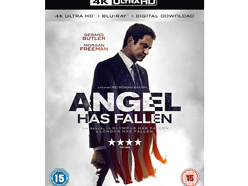 Win a copy of Angel Has Fallen on 4K Ultra HD

The sequel to Olympus Has Fallen and London Has Fallen, Angel Has Fallen lands on 4K Ultra HD, Blu-ray and DVD 16th December 2019 and to celebrate the release we are giving YOU the chance to win a copy on 4K Ultra HD.

When there is an assassination attempt on U.S. President Allan Trumbell (Morgan Freeman), his trusted confidant, Secret Service Agent Mike Banning (Gerard Butler), is wrongfully accused and taken into custody. After escaping from capture, he becomes a man on the run and must evade his own agency and outsmart the FBI in order to find the real threat to the President. Desperate to uncover the truth, Banning turns to unlikely allies to help clear his name, keep his family from harm and save the country from imminent danger.

The third instalment in the Fallen series, Angel Has Fallen stands on its own as a psychologically tense, kinetic thriller that never lets off the accelerator from its opening killer-drone attack. It also adds a revealing new chapter to the legend of Mike Banning, as the hazards of his work collide into his private life, pushing him to explore how he became the man he is now.

Watch the trailer for Angel Has Fallen here:

This competition is open to all eligible AVForums members who are in the Active Member User Group or higher, and who are subscribed to our newsletter. 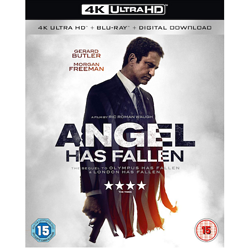