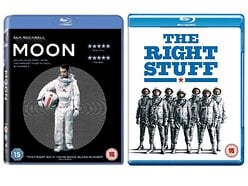 Win a 2-movie Space Bundle on Blu-ray
Competition Discussion
Sorry, but you are not eligible to enter this competition. You do not have the necessary permission to enter competitions.
You are a member of user group(s): Member - 0 - Unregistered / Unconfirmed.
The winner will be announced here after the closing date on Wednesday September 22, 2021.

MOON and THE RIGHT STUFF

We are giving YOU a chance to win copies of both on Blu-ray™!
​
Moon

An epic aviation film, based on Tom Wolfe's book, which charts the history of flight from Chuck Yeager's (Sam Shepard) legendary sound barrier-breaking flight in the 1940s, to the first men in space in the 1960s. The story centres on the relentless efforts of several US pilots to break all records set before them, finalising in the US space exploration programme of the 1960s, in which seven pilots were chosen to represent America in the heated space race with the Russians.

This remastered and restored Blu-ray edition has been sourced from an original 16 x 9 35mm theatrical print. The film was shot originally as 16mm, then blown up to 35mm for theatrical distribution. This remaster has been subject to a fresh grade and extensive manual frame by frame digital restoration.


Watch the Trailer for Moon here:


​
The question for this competition is available to hear on our podcast live streamed on YouTube at 730pm BST on September 15th 2021. 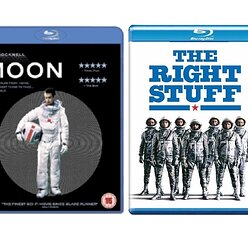