Why use a Soundbar or Speakerbase rather than your TV's speakers?

The perfect combination of convenience and performance? The manufacturers would certainly like you to think so. 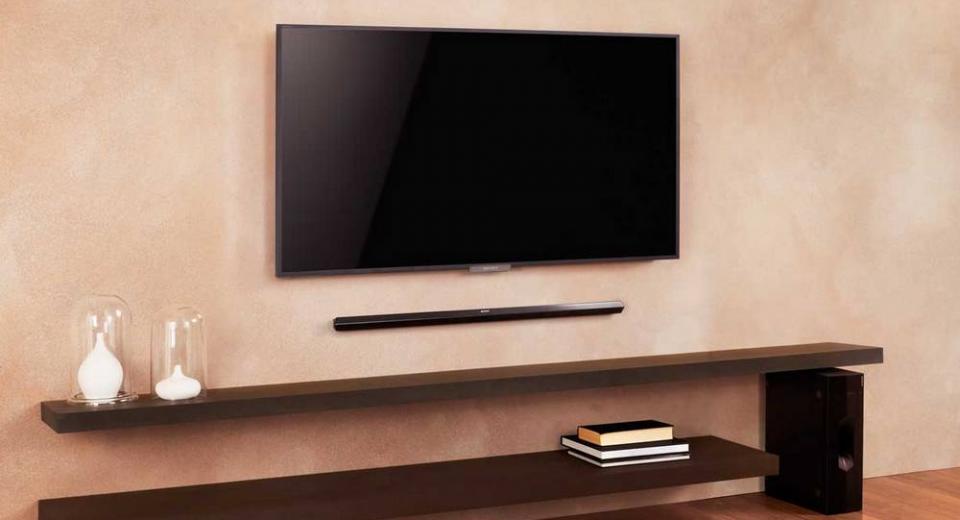 As our TVs have become increasingly slimmer, their audio output has diminished correspondingly with the size of their chassis’.

Where once the manufacturers would try and coax you into buying a 5.1 system, to deal with the shortfall in sound, most of their efforts are now concentrated at selling you packages with greater convenience and less unsightly wires to conceal.

True multichannel audio is now seen as the preserve of the enthusiast and the rise of the soundbar or, more recently, the speaker base goes on relentlessly.

We’d still advocate the use of a 5.1 (or above) system, where possible, but we also know it can be a challenge, both in accommodating multiple speakers and/or gaining the approval to do so in the living room environment.

A major benefit of the soundbar is that it presents a swift and virtually effortless upgrade to your TV's audio, requiring virtually no specialist knowledge.

Assuming you have assessed and subsequently dismissed the idea of multiple speakers, for whatever reason, then the motives for opting for a soundbar are fairly obvious. First and foremost, they will make the speakers fitted in your flat panel TV sound substandard, which, for the most part, they are. We have of late seen some effort from the TV manufacturers to improve the audio but a soundbar with only a very modest price will still outperform even Sony’s current flagship W955, which has been specifically designed to have impressive speakers.

Most soundbars are the very essence of plug-n-play Do I need a soundbar with HDMI?

The short answer to that question is ‘no’. The slightly longer version is ‘not necessarily’ but it does have advantages. Assuming your TV has an HDMI port which is Audio Return Channel (ARC) compatible – most made in the last 4 years will have – then it will allow you to cut down on the coffee table remote control clutter as it means you will be able to control the volume output of the soundbar using the volume buttons on your TVs remote.

We should point out that, in the case of some recent LG TVs, you can get the volume control through the TV remote by using an S/PDIF connection between them and the soundbar but, to our knowledge, they are the only manufacturer yet to pull off this trick. There are also examples of soundbars which can learn commands from your TV so you can, in effect, replicate that ARC advantage by teaching it the TVs volume buttons - provided you can switch off the TVs speakers in its menus, that is.

ARC also allows your TV to act as a conduit for both the audio it produces and the audio it receives from external sources, which means you can distribute sound from any device connected to the TV by HDMI, via a single cable. So, for example, you could have a Blu-ray player, set-top box and couple of games consoles hooked up to your TV and be able to utilise the soundbar for each with just one HDMI cable.

ARC is handy but HDMI is not the be-all and end-all in sound quality terms
The downside of using just the one HDMI cable to interconnect is that multichannel audio signals will, in most cases, be automatically down-mixed to stereo and any Dolby/DTS (multichannel) decoders will be bypassed. There are exceptions to that rule - notably some Sony TVs - so you'll have to check the individual specs of your TVs ARC compatible HDMI input(s) for certainty but we usually find that, should a particular soundbar possess said decoders, it will produce a better sound when fed directly with the multichannel signal. For clarity, that can be either through a dedicated HDMI port OR a digital optical cable.

Some, but not many, soundbars do offer multiple HDMI ports which negates the down-mixing downgrade but usually you will find that using multiple sources involves utilising a digital audio connection – mostly S/PDIF Optical but sometimes Coax, depending on what your source has. For those unsure, the picture below shows Optical on the left and Coax to the right. A direct digital audio connection will comfortably carry a 5.1 channel audio signal to the soundbar and should, in most cases, produce better results than you will get from sound carried along the ARC ‘pipeline’ from external devices; so don’t assume it’s not as good as using HDMI, just because they are older technologies. In all cases, you should get 5.1 audio, over HDMI, from the TVs internal satellite or DTV tuners, where programming is broadcast with it.

Because the various manufacturers all have their own ideas in how ARC should be implemented, we know the variables are a touch confusing for the uninitiated but you can always use the comments section below for questions on your individual setup.

If you thought a soundbar was the last word in a tidy and convenient audio solution, think again. One of the current major trends in the industry has been for speakerbases/soundplates/soundbases/call them what you want, as they all amount to the same thing. Think of them as an audio shelf on which to place your TV, thus taking up little, or no more, footprint than that of your TVs base-stand. Despite the relative newness of the product category, we’ve already seen quite a number of these devices for review, including efforts from LG, Denon, Panasonic, Maxell and Cambridge Audio. Each performed quite well with, in general, sound processing that gave the impression that audio was coming out of the centre of the screen, rather than below it. The fact that they are generally smaller than a soundbar means they have less separation and bass impact, however, as the subwoofers are built in, rather than supplied as separate units, as we get with the majority of soundbar packages.

For example, we recently reviewed Sony’s entry-level CT60BT soundbar and subwoofer package which despite only costing around £150, still managed to outperform all the soundbase products linked above. Considering the majority of those cost at least £100 more than the Sony, it’s easy to see that you can get a better £ to performance ratio from a soundbar. That said, all of the above did produce a much enhanced audio experience when compared to just about any flat panel TV you could mention, so they are still a viable alternative if you’re really struggling for space.

Speaker-bases are really only for those with little space or a tidiness OCD.
Music & Bluetooth

The likelihood is that you’ll be placing your soundbar in your living room so why not take advantage of it as a music player? We’re struggling to think of any soundbar or soundbase product we’ve seen in the last 12 months that didn’t include Bluetooth streaming as a feature. And the majority of the very latest products are aptX capable, meaning that if your source material is up to it, you’ll get quality that is within a whisker of that delivered by ye olde compacte disce. Further, the rise of NFC (Near Field Communication) technology in Android smartphones and tablets has seen most of the newer products include an NFC tag somewhere on the speaker, so connectivity could barely be simpler. In all honesty, we could pretty much discount all the soundbases mentioned for anything like ‘serious’ music listening but some of the soundbars we’ve reviewed do lend themselves to the discipline rather well. For example, Pioneer’s SBX-N500 is quite the talented performer in that regard and their Sound Retriever technology, genuinely restores a bit of sheen to compressed music files. Philips’ HTL5120 also has a very nice, warm quality that lends itself well to acoustic tracks. They both also sport integrated subwoofers so are very compact solutions to boot.

If music is your primary concern and Bluetooth is a prerequisite for the system, we would steer you clear of either soundbars or soundbases in favour of something like the Ruark MR1 or Roth OLi POWA 5 systems, however, as you’ll be better served by their much more convincing stereo representation.

The Philips Fidelio 9100 gives the best of both worlds. We’ll close up by giving you a recommendation for something from the slight left-field in the Philips HTL9100. The beauty of this system is that not only does the speakerbar/subwoofer combo provide one of the most convincing soundstages we’ve heard in the category but it has a rather neat trick up its sleeve too. The HTL9100 features a design where the ends of the speaker bar can be detached and then placed behind the listening position as satellite surrounds. It works really well so when the rest of the house is sleeping, you get that surround sound package you wanted all along but without the concerns of trailing wires.

Hopefully we’ve helped you along the way in your decision making process and we must stress that, where possible, we’d still recommend you investigate the feasibility of a ‘proper’ multichannel system but there are some very good soundbar packages on the market right now.

For our full list of soundbar news and reviews, take a look at http://www.avforums.com/tag/soundbar and if you have any questions or comments, please use the section below