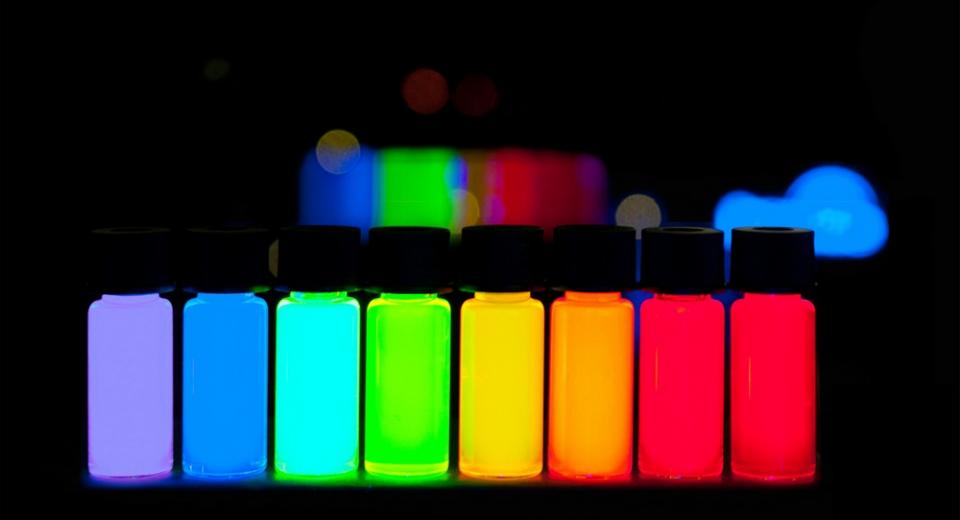 If there’s one trend emerging from CES 2015, as far as the TVs are concerned, it’s that a lot of the higher-end 4K sets are including Quantum Dot (QD) technology.
Sony were the first major manufacturer to embrace this technology, with their TRILUMINOUS TVs announced a couple of years back, but others are now taking their lead as the industry pushes for wider colour spectrums to keep pace with the proposed Ultra HD standards.

To that end, some members of the industry are now pulling together to form the UHD alliance, in an effort to distinguish devices and content that adhere to more premium quality standards than many of the 4k sets currently on the market can match.

What is Quantum Dot technology?


Well, it’s nothing all that new as it’s been around for more than 30 years but it is relatively fresh, as far as TV manufacturing goes. It was discovered by Russian scientists Alexander Efros and Aleksey Ekimov, as well as the American chemist, Louis Brus, who was working completely independently to the Russians on another project.

To give them their more correct title, Quantum Dots are colloidal semi-conductor nanocrystals and it was Brus who discovered that a reaction in certain solvents would create particles of differing sizes, that could then achieve any colour in the spectrum, dependent on that size. The particles range between 2 and 10 nanometers in diameter or, to put it another way, around just 50 atoms! So why are the manufacturers so keen on them now?


The simple answer is the rise of Ultra HD/4K in the ‘Resolution Revolution’. We’ve seen plenty of 4K displays here at AVForums now but we’ve long argued that the public at large would see at least as much benefit from wider colour expression and greater dynamic range as they would from an increase in pixel count, and QD technology allows them to achieve that in conjunction with existing LCD/LED technology.

While LG ploughs almost a lone furrow with its costly pursuit of OLED technology to achieve similar ends, others have clearly decided they would rather not spend the vast sums in R&D required to match the more demanding Ultra HD standards. The great thing about Quantum Dots is that they can simply be added as a layer on top of the LED backlighting, making it a relatively simple – and cheap – process to add in the manufacturing plants. You might even argue that this is something of a back-up plan for everyone bar LG, as they all came to the realisation that OLED was too expensive, and you’d probably be right.

Who has Quantum Dot Displays at CES 2015


It’s probably only fair and proper to namecheck Sony first, as they were the ones to bring it mainstream. The name TRILUMINOUS lives on but Sony has now taken the technology in-house, after initially using specialist company QD Vision to apply their expertise. Chinese manufacturers, and rising force, TCL are using QD Vision dots in their TVs which are claimed to have wider colour gamuts than anything else on the market – including OLED.

Despite LG having OLED pretty much to themselves, they also have QD LCD/LED TVs at the show so they’re clearly not putting all their eggs into one basket. At least one of LG’s ColorPrime series will utilise QD technology and they claim a 30% increase in the colour gamut which is getting close to the 4K Digital Cinema (DCI) spec. Samsung also announced some QD news of their own with their SUHD TV’s. Samsung stops short of naming the technology behind them as Quantum Dot but the description makes it plain they are. They say that a nano-crystal semiconductor transmits different colours of light depending on their size to produce the highest colour purity and light efficiency available today and they claim they will have 64 times more colour expression than conventional TVs.

Should we call them QLED or QD TVs or something else?


We’re really not sure. On the one hand, there probably needs to be some quick and easy way of identifying these TVs as different to the LED/LCD TVs on the market but do we really need another marketing term with which to confuse the public? Much as the consumer was mislead with the confusing marketing when ‘LED TVs’ first emerged – they were just LCD TVs with LED backlighting – so this is just another bolt-on technology to improve the limitations of that technology. In reality these are LCD TVs, with LED backlighting augmented by a layer of Quantum Dots but try selling that to Joe Public and it will likely leave them cold. We’ll just leave it up to you to call them what you like for now.

OLED Vs QLED – which is better?


There’s no doubting that the natural traits of OLED take some beating. Despite the improvements in backlighting systems that QD will bring, those TVs using them will still struggle to match the native contrast levels OLED can bring to the table, by virtue of the fact an OLED TV can completely switch off its pixels to produce pure, inky blacks. On the other hand, QD TVs can be produced more easily and therefore cheaply, whilst achieving near OLED performance so they could be the better bet for getting 4K to where it should be more quickly.

Whatever happens down the line, this CES has produced another potential fascinating TV technology ‘rivalry'. Could QD be a potential OLED killer or does LCD still have to many inherent weaknesses. What should we call these TVs and do they interest you?

We’d love to hear your thoughts in the comments section below...