The choice of the professionals 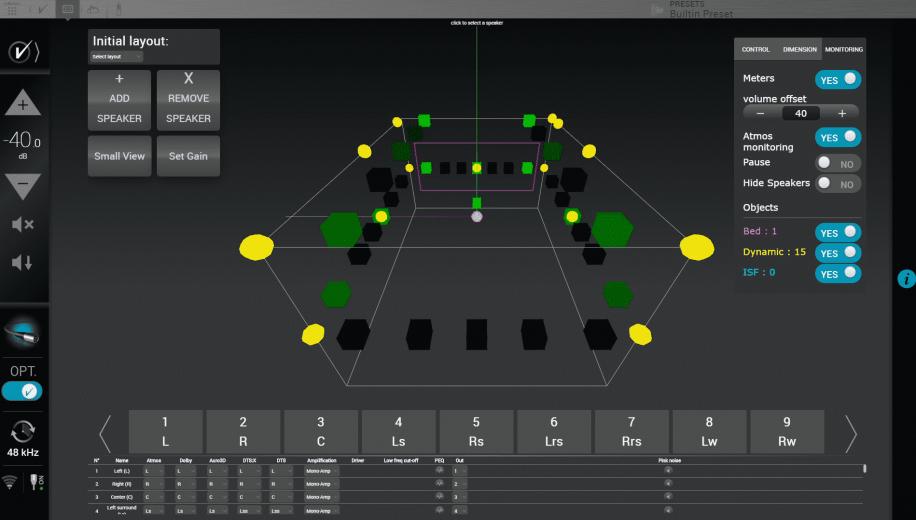 The biggest influence on the sound quality of any acoustic system is the room it's in. You can spend hundreds of thousands on audio equipment, but if the room has issues, it will still sound bad.

There are two ways of addressing this issue, and the first approach is to treat the room itself with absorption panels, diffusers and bass traps. You can also correctly locate the speakers for optimal performance, and position any subwoofers to avoid any obvious bass issues caused by the dimensions of the room.

However this approach, even though highly recommended as the foundation of your home theatre design, can be intrusive or expensive, and most systems involve a degree of compromise when it comes to the room. So a complementary and more convenient approach to correcting the environment's egregious aspects is to employ one of the many software-based solutions. Of these, the Trinnov Optimizer is undeniably the most sophisticated and flexible room correction system available.

Trinnov was founded twenty years ago to research 3D sound and develop loudspeaker and room correction technology for professional use in the audio and broadcast industry. The result was christened the Optimizer by Trinnov and was primarily intended for studios. The name was chosen to reflect the fact that the software doesn't just correct the room, but optimises the entire system.

The Optimizer has been gradually refined over the years, and is now the only digital room correction system widely used throughout the audio production chain, from studios to commercial and private cinemas. It is used daily in over 1,700 studios worldwide, and is included in all of Trinnov's professional and consumer products.

The Optimizer relies on Trinnov’s unique 3D Microphone to localise speakers and capture sound in three dimensions. Each microphone is individually calibrated for accuracy to ensure the most reliable acoustic measurement, and the entire signal path remains within a Trinnov-controlled environment (in the processor) rather than relying on external software, operating systems or audio interfaces.

The measurement microphone is one of the most critical components of any loudspeaker and room calibration system. For this reason, Trinnov’s sophisticated algorithms rely not only on extremely accurate acoustic measurements but also on the bespoke 3D microphone that can localise the speakers’ positions and to detect early reflections.

It uses four microphone elements in a precise tetrahedral arrangement, and each capsule is individually calibrated at the factory (±0.1 dB from 20 Hz to 24 kHz). The resulting calibration file is included in the microphone’s box on a USB stick, and is installed in the Trinnov product, with all subsequent measurements filtered through the calibration coefficients to ensure accuracy.

As each speaker is measured, the resulting sound waves pass through this array of microphones, hitting each one at slightly different times. Based on this timing, the Optimizer triangulates the location of the speaker from which the sound arrived. By testing each speaker in turn, a three-dimensional map is created of where the speakers are relative to the microphone at the main listening position.

The Optimizer captures a huge amount of acoustic information in each measurement and performs time domain and frequency analysis to better understand and characterise the behaviour of the speakers in the room. The time domain is required because the frequency response alone shows irregularities in response but doesn’t provide enough information to correct the errors properly.

This highly detailed information is then processed using Trinnov’s proprietary algorithms, providing a full acoustic analysis of the room. The acoustic graphs generated by the Optimizer for each measurement point include the phase response, group delay, and impulse response of each speaker, all of which are important to understand what is occurring in the room over time.

While time-aligning speakers is important, Trinnov also believes time-aligning frequencies is essential for improving sound staging and transient reproduction. This level of sophisticated acoustic analysis may sound like overkill in a consumer product, but Trinnov believes that professional and regular users alike should have access to effective room correction.

To help achieve this goal, Trinnov has introduced a setup wizard to simplify the initial measurement and calibration process. However, the manufacturer also realises that every system is unique, and many acoustic parameters come into play. As a result, the Optimizer offers extensive flexibility and customisation for professional users and audio enthusiasts alike.

Since the Optimizer is an entirely proprietary product, it doesn’t require external equipment beyond the dedicated microphone, and it can be controlled locally or remotely over the internet. In addition, since the measurement data resides in the machine itself, subsequent changes are easily made, and all with 64-bit floating-point precision.

Regardless of your experience, the Optimizer is easy to use and initially requires placing the 3D microphone at the ‘reference point’ (sweet spot), ensuring it’s completely level and the LED light on the front is aimed at the centre speaker. You then run the setup wizard, select your chosen speaker layout and allocate each of the XLR outputs you're using to the relevant speaker or subwoofer.

Once you've done that, you input the actual measurements of your room, which the processor shows as a three dimensional image with speaker and sub placements. You can then set the crossovers using Trinnov’s comprehensive bass management system, which allows separate crossovers for each individual speaker.

Then just run the Optimizer, which takes all the measurements using the 3D microphone. After taking measurements from the reference point, move the mic to a different position, ensuring that it remains level and is still aimed at the centre speaker, and take a second set of measurements. Taking extra measurements will make the overall correction more suitable across a wider area. The more measurements you take, the more accurate a spatial representation of your system is created.

The strength of Trinnov's Optimizer is its ability to create a seamless 3D sound field, where the speakers are well-matched in terms of their amplitude and time domains. The Optimizer ensures that the effect of the room and any acoustical quirks in the speaker have been completely removed from the system. As a result, the bass should be perfectly integrated and the speakers tonally-balanced.

The Optimizer shows the results graphically, including three-dimensional representations of the positions and heights of all the speakers and subs in the system. There are also graphs showing the response, amplitude, reflections, phase and impulse measurements. You can create extra presets for different speaker configurations, seating positions and audio formats, and save up to 29 presets.

These days most AV processors and receivers come with room correction software, along with testing microphones and self assembly stands. It’s an acknowledgement by manufacturers that room acoustics can significantly impact their carefully designed and calibrated products to the detriment of the overall performance.

This was something Trinnov realised from the beginning, pioneering a room correction system and 3D microphone used by audio professionals all over the world. The same applies to the company's consumer products, where the Optimizer mitigates the influence of the room’s acoustics on your AV system, and lets you enjoy your music and movies as those same audio professionals intended.