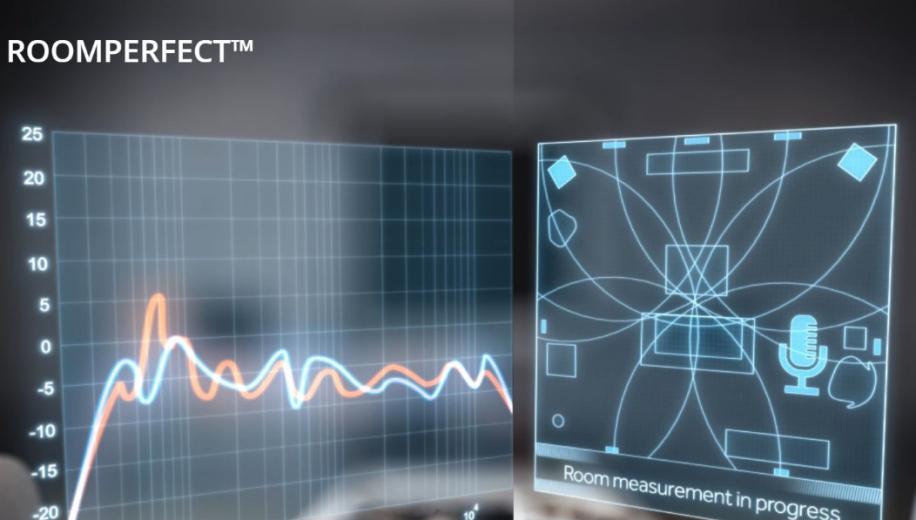 Can the effect of room acoustics on audio be removed completely? RoomPerfect aims to do exactly that and make the room vanish.

There’s no getting away from the fact that no matter how good your audio equipment is, the resulting sound you hear will be influenced in some way by the environment in which the equipment has been placed. For most of us, that means the shape, size, construction and contents of our lounge, bedroom or Man Cave will have a say on how the music or movie soundtrack we are listening to ultimately sounds. And in many cases, the room might have a negative impact on the overall quality of the final experience.

To address and rectify the influence of the room on audio, Digital Room Correction (DRC) software can be used to analyse the sound within a listening environment and then use digital filters to ameliorate unfavorable effects of the room’s acoustics.

Lyngdorf’s RoomPerfect is such a DRC tool and it works differently to many alternatives and provides a high level of performance and consistency while still being easy to use. For Lyngdorf’s MP-60 and MP-40 processor’s, as well as its stereo amplifiers, one of the big selling points is the inclusion of RoomPerfect.

Founder and audio legend Peter Lyngdorf began developing room correction 30 years ago, and released the first full-range digital room correction system back in 1993. So it’s fair to say the company has been a pioneer in this area, with plenty of time to refine the process which reportedly incorporated 54 separate elements protected by one of the largest patents in the history of audio and an investment of $9 million.

That first system took a similar approach to those currently used by other manufacturers, but Lyngdorf realised this type of measurement didn’t capture the distinctive sound of the speakers being used. These systems work by ‘correcting’ the sound of the speakers to match a pre-determined response, thus making all speakers sound the same.

A conventional room correction system places an upward-firing mic at the main listening position and takes a measurement, before repeating this process across the seating area. Firing a mic at the ceiling from the seating position will typically measure less than 10% of the sound coming directly from the speakers themselves.

As the characteristics of the speakers haven’t been captured, the system cannot preserve them, and the correction applied will change the sound of the speakers to mimic a pre-determined target curve. RoomPerfect is designed to eliminate the negative acoustical aspects of a room while retaining the sonic signature of the speakers.

RoomPerfect’s approach is based around four key aspects:

Focus Speaker Measurement – the first measurement points the microphone directly at the front speakers. This measures the speakers with minimal additions from the room, thus allowing RoomPerfect to differentiate the room from the speakers and preserve the characteristics of the latter, rather than simply changing it to match a pre-determined curve.

Room Measurements – The acoustic errors a room creates are a complex three-dimensional problem. To fully understand them requires measuring throughout the full height, width and length of room. To achieve this, RoomPerfect takes random measurements throughout the room until a ‘room knowledge’ of at least 98% has been achieved.

Bass Management with Combined Speaker and Woofer Measurement – Correcting each speaker and woofer for the adverse effects of the room won’t guarantee optimal results. As a result, RoomPerfect measures each speaker in conjunction with each subwoofer, creating a seamless blend between the speakers and woofers for the best possible bass response from every speaker.

Optimal Power Response – Lyngdorf believes smoothing out errors in the frequency response is insufficient to reproduce music faithfully. By optimising the power response of the speaker to the room, RoomPerfect ensures bass is felt as well as heard. In systems with dual subwoofers, stereo bass is also created with seamless integration of the speakers on each side of the room.

Despite its sophistication, RoomPerfect is incredibly easy to use. This is one of the biggest strengths of the system, because anyone can successfully run through the process and get fantastic results. Other systems might offer more options for tweaking, but they tend to be overly complex, often requiring training courses and dealer setup.

Despite its sophistication and complexity RoomPerfect is incredibly easy to use, making it accessible to everyone

For RoomPerfect, all you need to do is select your speaker layout (for example, 9.2.4), and choose the appropriate crossover. There’s plenty of choice when it comes to speaker size, with options for XS, S, M, L, XL, and XXL, and Lyngdorf specifies the crossover point for each of these sizes as follows: 120, 100, 80, 40, Full Range, and Full Range + LFE if no subwoofer is in the system.

In addition to those options, there is a Custom setting that allows you to select some other crossover frequency. The MP-60 supports up to four subwoofers, and you can choose between these being daisy-chained LFE subs using the dedicated LFE output, or individual subs connected to specific channels (front left and right, and rear left and right).

Assigning two or more of the auxiliary outputs to subs leaves less channels available for the other speakers. So assigning four subs would leave 12 channels of processing, which means you can’t run a 9.4.6 system. Changing from a 9.2.4 configuration with two subs up front as a stereo pair to 9.1.6 will require use of the LFE output and daisy chaining the subs.

It’s worth pointing out that the more attention you pay to the initial placement of your speakers, and particularly the subs, the easier it is for any room correction system. However, Lyngdorf claims RoomPerfect can handle any type of room, channel configuration and speaker placement, and still deliver exceptional results.

Once you’ve decided on the speaker layout, subs and crossovers, simply measure the distance from the focus microphone position to all the speakers and subs using a laser measure. You then load these measurements into the MP-60, and you’re ready to run RoomPerfect.

The MP-60 comes with a calibrated microphone, which you connect using an included and pleasingly-long XLR cable to a dedicated input at the rear. There’s also an included microphone stand, which isn’t that great to be honest. A professional mic stand will make taking random measurements at different heights around the room much easier.

Initially, you position the mic at the focus point, which is basically the ear-level sweet spot, and point it directly forwards. RoomPerfect creates test tones to measure each speaker and sub from this focus position, and these tones use a frequency resolution of 1/12 octave, which corresponds to no less than 121 pure tones for covering the range from 20Hz to 20kHz.

The first 50 tones, which cover a frequency range from 20 to 350Hz, form the “low frequency test signal", while the remaining 71 tones form the “high frequency test signal”. The first 50 are on for approximately 25 seconds in each loudspeaker, and the other 71 are on for about five seconds in each loudspeaker due to lower background noise levels at higher frequencies.

Once RoomPerfect has measured the initial focus position, it tells you to keep taking measurements from random locations in the room, at various heights and with the mic pointing in different directions (up, down, sideways) until the system has built up a complete acoustical picture of the room. Lyngdorf refers to this as ‘room knowledge’, and, for optimal results, you should keep taking measurements until it reaches 95%. You can then take two final measurements close to the boundary walls to give the system a final ‘look’ at the sonic environment, resulting in a final room knowledge of 98%.

RoomPerfect is designed to ensure the subs are seamlessly integrated with the other speakers in the system, creating a tight and responsive foundation of bass. The calibration process produces Focus and Global settings: the first is optimised for the main listening position; while the second is designed to ensure those who aren't sat at the sweet spot can still enjoy a superior sonic experience. You can cycle through Focus, Global and Bypass to compare the before and after impact of RoomPerfect on your system.

Lyngdorf’s approach to room correction doesn’t go for the graphical representation favoured by other systems. However, it does provide the opportunity to adjust the 'voicing' (as Lyngdorf calls it) using pre-loaded curves that amplify or attenuate certain frequencies. As well as Neutral settings, you can also create your own voicing equaliser filters according to personal preference.

While RoomPerfect is amazingly user-friendly, it can be quite a time-consuming process. For example, measuring 13 speakers and two subwoofers with over ten different random mic positions took over two hours from start to finish for the MP-60 review.

However, despite this protracted measuring period and its sophistication, RoomPerfect is also incredibly easy to use. As a result, anyone can get a fantastic level of sound quality without needing any detailed acoustic knowledge or training. The closely guarded processes at the heart of Lyngdorf’s room correction system border on magic, producing a system that is convincing, transparent and cohesive

With the MP-60, we found RoomPerfect so good at eliminating the negative aspects of the environment that the room disappears, and the speakers merge into a single tonally balanced whole with a frequency response that seamlessly ranges from 20Hz to 20kHz. The subs are integrated with exceptional precision, and sound effects are seamlessly steered from speaker to speaker. For us, the result is a sonic experience that’s utterly compelling and completely spell-binding.

﻿More and more AVRs and Hi-Fi amplifiers come with room correction software included, along with testing mics and self assembly mic stands, It’s an acknowledgement by AV manufacturers that room acoustics can significantly impact their carefully designed and calibrated products to the detriment of the overall enjoyment.

There are alternative DRCs to Lyngdorf’s RoomPerfect, with some manufacturers having proprietary or licenced solutions. For example, the Trinnov Audio’s Altitude16 processor uses the company's proprietary Optimiser, which evolved out of the company’s professional heritage. Optimiser is incredibly sophisticated and flexible, but should really be set up by a suitably trained dealer if you’re not confident in your installation abilities.

Whichever room correction software you end up using, it’s an effective way to remove the influence of the room’s acoustics on your expensive AV equipment and lets you enjoy your music and movies as the creators intended.