Watching sport is about to get a whole lot better 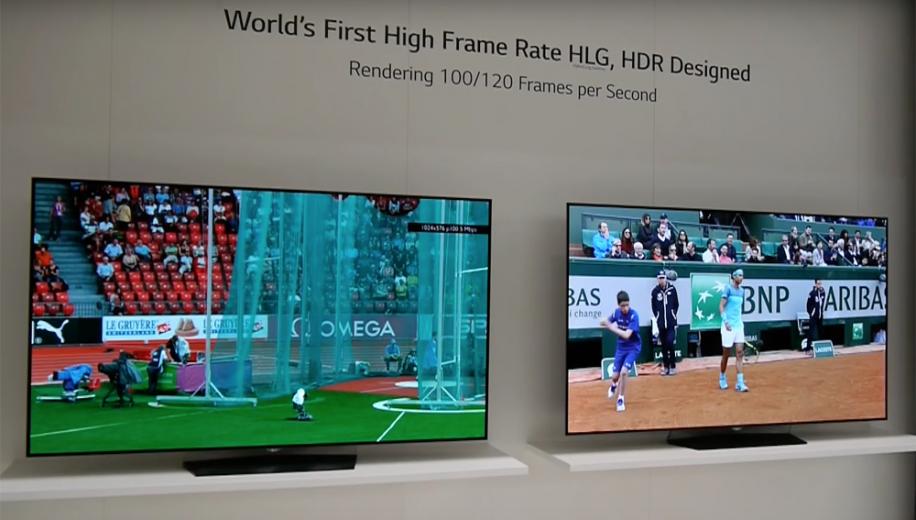 In its simplest terms High Frame Rate or HFR just means shooting film or video at an increased number of frames per a second.
A moving picture is composed of a series of still images or frames and when these frames are played back one after the other, the brain perceives it as motion. When it comes to feature films, they are traditionally shot at 24 frames per a second. That means that every second of film is composed of 24 individual frames.

Why 24 frames you ask? The simple truth is that 24 frames per a second (fps) was chosen as the minimum frame rate needed to produce a moving image that was acceptably free of flicker and judder. It is also the minimum frame rate required to deliver optical soundtracks included on the film stock used for release prints with sufficient audio fidelity.

As a result the use of 24fps dates back to 1927 when sound was first introduced at the cinema. If you increase the frame rate you can further reduce these motion artefacts and flicker but the higher the frame rate, the more film you use in terms of both capture and presentation. Since film is expensive, 24fps is an artistic and commercial compromise intended to deliver the best result for the minimum cost.

These days the majority of films are shot digitally, so there is no physical or commercial reason not to shoot at higher frame rates. And yet most films are still shot and projected at 24fps because there is a long established look to that frame rate which people immediately associate with film.

If you increase the frame rate, the smoothness of the resulting image starts to look more like video and less like film, so the majority of directors and cinematographers prefer the look of 24fps when shooting feature films and TV dramas, even though the majority of these productions are shot digitally.

There have been attempts to use higher frame rates in feature films, most famously with Peter Jackson's Hobbit trilogy. Jackson, who took the decision to shoot the Hobbit films digitally and in 3D, felt that a higher frame rate would help reduce judder and other motion artefacts, resulting in a more immersive and less fatiguing experience.

The experiment was an unmitigated disaster, with most filmmakers, critics and cinema goers complaining that the film now looked like cheap video. Jackson shot the Hobbit films at 48fps but even just doubling the frame rate destroyed the filmic look of the production. After the negative responsive to the HFR screenings of the first Hobbit film, the second and third Hobbit films were also released in 3D HFR but the number of screenings were massively reduced and there was no mention of it in the publicity.

After the backlash that HFR received on The Hobbit, most filmmakers have shied away from using higher frame rates, although Ang Lee's latest film does use HFR. In fact Lee went even further than Jackson, shooting Billy Lynn's Long Halftime Walk in 4K 3D at 120fps. Lee wanted a sense of hyper reality, especially when it came to the main character's flashbacks of his combat experiences in Iraq. However the use of HFR in this film was just as off-putting as it was on The Hobbit.
The improved motion with HFR could be a game changer for sport
So does that mean that HFR is a failed format already? Not at all because although HFR might rob a movie of its film-like quality, it will revolutionise TV broadcasting and especially sport. When it comes to TV and specifically video production, higher frame rates are already routinely used.

Until recently television programmes were shot using 25 or 30 progressive scan video frames per a second (depending on which of the TV standards was being used – PAL or NTSC). When people refer to progressive scan video they mean a full video field, in much the same way as a frame of film is a full still image, and this is normally represented as 25p for PAL and 30p for NTSC.

This 25 or 30p footage is actually broadcast using an interlaced signal with a frequency of 50 or 60 Hertz (Hz), the TV then deinterlaces these 50 or 60 interlaced video fields to create the full image. That's why we test a TV's deinterlacing capabilities in our reviews because it remains important when watching TV broadcasts that still use an interlaced signal.

The reason the interlaced signal uses a frequency of either 50 or 60Hz is directly related to that particular country's electrical power supply, so here in the UK it's 50Hz and in the US it's 60Hz. Modern video cameras can film at higher frame rates and in the interests of future proofing many productions now routinely use 50 or 60p because high definition broadcasts at those higher frame rates are considered the next step in TV broadcasting.

In fact TVs have been able to accept 1080/50 or 60p for a while now and the manufacturers have been taking advantage of the increased refresh rates on their panels to offer users increased frame rates. They achieve this either by simply increasing the displayed frame rate or by using frame interpolation to essentially guess additional frames that are inserted between existing frames.

The result can be better motion handling with fast moving content such as football but it also makes movies and TV dramas appear too smooth, robbing them of their film-like quality. That's why we always recommend turning any frame interpolation feature on your TV off when watching films or TV dramas because otherwise you'll get the dreaded 'soap opera effect'.

Whilst modern frame interpolation software is impressive, it can still result in image artefacts so should be used sparingly. Conversely HFR is actually shot at a higher frame. So instead of 100 frames a second, of which 75 are interpolated, there are 100 actual frames which will have a significant effect on motion resolution.

The latest ITU (International Telecommunication Union) recommendations for HDTV and Ultra HD TV are laid out in ITU-R Recommendation BT.2100, which is more commonly known at BT.2100 or Rec. 2100. This defines various aspects of future TV broadcasting such as resolution (from 1080p to 8K), bit depth (10- or 12-bits), High Dynamic Range (HDR) and colour gamut (Rec. 2020).

The recommendations also cover frame rates and only progressive scan frame rates are allowed, up to 100/120p depending on where the broadcasts are taking place. The potential of broadcast frame rates up to 100 or 120p will be a real game changer (if you'll excuse the pun) when it comes to sports.

A number of manufacturers, including LG and Samsung, have demonstrated their latest panels with 100p content that uses a mixture of football and tennis, both of which are fast-moving sports. The benefits of the higher frame rate were immediately obvious, with the motion of the ball or the players appearing smooth and judder free, with no distracting artefacts.

Until recently the emphasis has very much been on the increase in resolution from 1080p to 4K but the reality is that this is the least exciting part of the new standards. At a normal viewing distance the difference between 1080p and 4K is minimal but the addition of other developments such as 10-bit video depth, High Dynamic Range, a wider colour gamut and immersive audio will all be far more noticeable. To that list we can add High Frame Rate and if you're a sports fan or a gamer, the move to HFR might be the single most important development in the transition to Ultra HD TV.


MORE: What is Immersive Audio?