What exactly is HFR 3D? 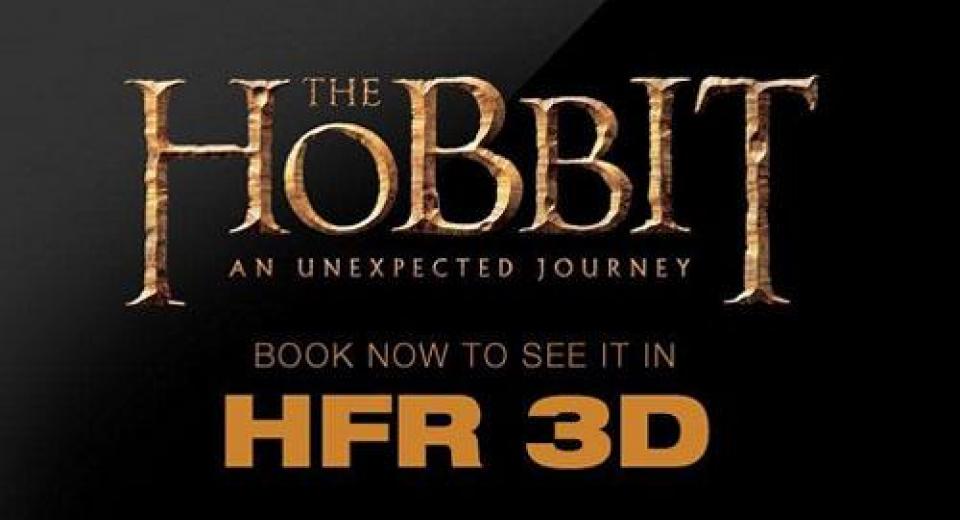 With the release of The Hobbit last week, you might be wondering what all this talk of HFR, high frame rates and 48 frames per second is about?

Well, Peter Jackson, the director of The Hobbit, decided to shoot the film digitally using the RED Epic camera, which not only provided a resolution in excess of 4K, but also offered the option to record at a higher frame rate. Since Jackson had already made the decision to shoot The Hobbit in 3D he felt that using a higher frame rate than is normally used for film, would help reduce image blur and give the 3D a greater sense of realism.

So what is the normal frame rate for film production? In the early days of cinema the frame rate used was between 14 and 24 frames per second (FPS), depending on how fast the operator hand cranked the camera. A frame rate of at least 14 frames per second is enough for the human eye to perceive motion, but the results will appear jerky and have flicker. As a consequence, silent films began to use higher frame rates to improve motion handling, and projectors would use dual-blade shutters to multiply the frame rate and reduce flicker. However, with the introduction of sound in 1927, the film industry needed to agree a motor-driven, constant camera speed to ensure synchronisation with the new optical soundtracks.

These early optical soundtracks required a minimum speed to achieve fidelity of the sound, but 35mm film stock is very expensive, so the frame rate also needs to be as slow as possible to minimise cost. Between 1927 and 1930 the use of 24 FPS was chosen as the standard for 35mm sound film production because it offered the best compromise between a high enough frame rate to maintain audio fidelity and a low enough one to keep production and distribution costs down. To eliminate flicker, the film was projected at 48 images a second by using a dual-blade shutter to repeat each frame and more recent 35mm projectors even use triple-blade shutters to repeat each frame three times, thus creating an image without obvious flicker.

With the introduction of sound in 1927, the film industry needed to agree a motor-driven, constant camera speed to ensure synchronisation with the new optical soundtracks. For over 80 years, those 24 frames running through the camera each second have remained the standard by which all feature films are shot. Whilst it isn’t perfect - it can produce movement artifacts, like strobing, flicker and motion blur - it is this frame rate that gives film its unique look. There have been many innovations in film production since the introduction of sound - colour, widescreen, 65mm, 3D, digital capture - but through all of that the frame rate has remained unchanged, until now that is. With film production transitioning to digital capture via ultra high resolution video, there is no technical or budgetary reason to limit the frame rate, aside from an aesthetic one of course.

In the world of television the situation has always been somewhat different, with American television recording content on interlaced video at 60Hz or while European television is recorded at 50Hz. During broadcast, the images are transmitted as interlaced fields at 60Hz or 50Hz depending on the TV format used (NTSC or PAL). Modern TVs then deinterlace the two fields and display them twice to create the full image, thus improving the motion handling and reducing perceived flicker. As a result TV pictures shot on video have a look that is unique to themselves and different from that of 24 FPS film.

Whilst the introduction of high-definition broadcast television has increased the resolution to 1080-lines, it is still interlaced - hence the 1080i designation - and thus still uses either 60 or 50Hz to allow the interlaced fields to be combined. When it comes to 1080p24 Blu-rays, the original film is transferred at 24 FPS, although your TV or projector will display the images at a higher refresh rate such as 48Hz, 72Hz or even 96Hz. You will notice that these are all multiples of 24 and just like the dual- or triple-blade shutters in 35mm film projectors, the result is to reduce flicker whilst still retaining the unique look of film captured at 24 FPS. Unfortunately in recent years, rather than just increasing the refresh rate in multiples of the original, TV manufacturers have also introduced a process called frame interpolation. What frame interpolation essentially does is add new frames by guessing what the frames between two existing frames might be. So instead of just repeating frames to increase the refresh rate, the TV is actually adding new ones. Not only does this result in artefacts in the image, caused by the interpolation algorithm getting it wrong, but it also creates a smoothness often referred to as the "soap opera effect".

The term "soap opera effect" was coined as a short-hand way of describing the smoothing effect that the frame interpolation feature on modern TVs has on film-based material. By adding additional frames, these interpolation features are meant to reduce blur and smooth out motion, which they do very well. The problem is that in doing so they rob any film-based material of the subtle motion blur inherent in the original 24 FPS photography, be it film or digital. As a result the beautifully composed and photographed images in the film end up looking like a TV soap opera shot on cheap video cameras with expensive lighting.

In the gaming world, the majority of games made for consoles like the PS3 and Xbox 360 use a slightly higher frame rate, which is how the game developers designed them. This is logical enough, a game is not a film, despite the fact that games often mimic certain film attributes like lens flares, and the frame rate reflects how fast the hardware is rendering new images for smoother animation. Gamers like the smooth motion and improved reaction times and, at least when building PCs, try to boost average rendered frame rates, in order to get enough processing headroom to maintain a high enough frame rate, particularly in crowded and busy scenes as the game progresses.

Within the film industry, 48 FPS, along with 60 FPS, is called High Frame Rate or HFR for short. When it comes to digital film capture the cameras are using a progressive frame rate of 24p along with a higher resolution, as much as 5120 x 2700 for an aspect ratio of 2.40:1 on the RED Epic cameras. Peter Jackson bought 48 RED Epic cameras for use on The Hobbit, which are combined to create 24 3D camera rigs to shoot the film in native 3D. None of this is new but what is unusual is Jackson's decision to shoot The Hobbit at a frame rate of 48 FPS. Within the film industry, 48 FPS, along with 60 FPS, is called High Frame Rate or HFR for short.

Peter Jackson's reasons for this decision centre around the perceived limitations of 24 FPS, whether through digital capture or 35mm, which he feels can result in excessive blur in each frame with fast movements, and if the camera is moving around quickly, the image can judder or 'strobe.' Jackson argues that shooting a film at 48 FPS does a lot to eliminate these issues, and looks especially good in 3D. According to Jackson, 48 FPS resolves the eye strain issue people have experienced when viewing 3D, and although he is currently only proposing using the higher frame rate for 3D presentations, he also claims that 48 FPS improves 2D as well.

There has been little public support within the film industry for HFR 3D and to date the only major filmmaker to express an interest in using a higher frame rate is James Cameron, who plans to shoot his Avatar sequels at 48 or possibly even 60 FPS. When a 10-minute demo of early footage from The Hobbit was shown to attendees at CinemaCon 2012 earlier this year in Las Vegas, the response was so negative that Warner Bros. decided to only show the 48 FPS version in selected cinemas. Many critics said that the higher frame rate made The Hobbit footage look more like a stage play or a BBC video production from the 70s, many mentioned the dreaded "soap opera effect". The last comment is especially pertinent because whilst a RED Epic camera is actually capturing 48 frames per second and not using frame interpolation to create the additional frames, it would appear to still result in smoother motion. From a technical standpoint the results are obviously superior to frame interpolation, the captured frames are genuine and not guessed, thus they are free of unwanted artefacts and the images can be very detailed and sharp looking. However if, in the process, the smoothed motion ends up ruining the movie's film-like quality and reminding viewers of soap operas shot on video, then the validity of the format has to be questioned.

Whilst the film industry clearly combines both technology and commerce, it is, first and foremost, an art form and as such the look and feel of film is just as important as what is being photographed. In recent years, digital video has become the dominant medium in the film industry but whilst the cameras are capable of capturing pristine images, directors and cinematographers go to great lengths to retain a film-like quality. David Fincher has been a pioneer in the use of digital cameras but films such as The Social Network and The Girl with the Dragon Tattooretain the look of film through careful lighting and the subtle addition of grain. Fincher understands that the physical nature of film itself is as much a part of cinema's artistic expression as the set design, costumes, lighting or acting.

In the same way that the photo-chemical nature of film results in a certain aesthetic look, so does the frame rate used and whether or not we've been conditioned to accept 24 FPS as the look of film over the last 85 years is beside the point. The fact is that 24 FPS is an essential element in what gives film its unique look, and just because digital cameras offer higher frame rates, it doesn't mean that you should use them. Proponents of higher frame rates say the results look more real but that's rather missing the point, film isn't supposed to look real, it's a form of artistic expression. Besides if you want to take that view, it's the the lack of blur and unnaturally smooth motion that makes HFR look strange; there is blur in real life and if you need proof, just wave your fingers in front of your face.

It is clear that The Hobbit: An Unexpected Journey is a grand experiment on the part of Peter Jackson, that might usher in a new age of higher frame rate film production. Whether or not the use of higher frame rates catches on will largely depend on the reaction of the general public as well as the critics and, to a degree, on how much other filmmakers are prepared to embrace the new technology. Although The Hobbit opened this weekend, the jury is still very much out on high frame rates, it might well be that the experiment ultimately fails or its possible that it will be The Jazz Singer of the 21st century.