They're so small the normal rules of physics no longer apply 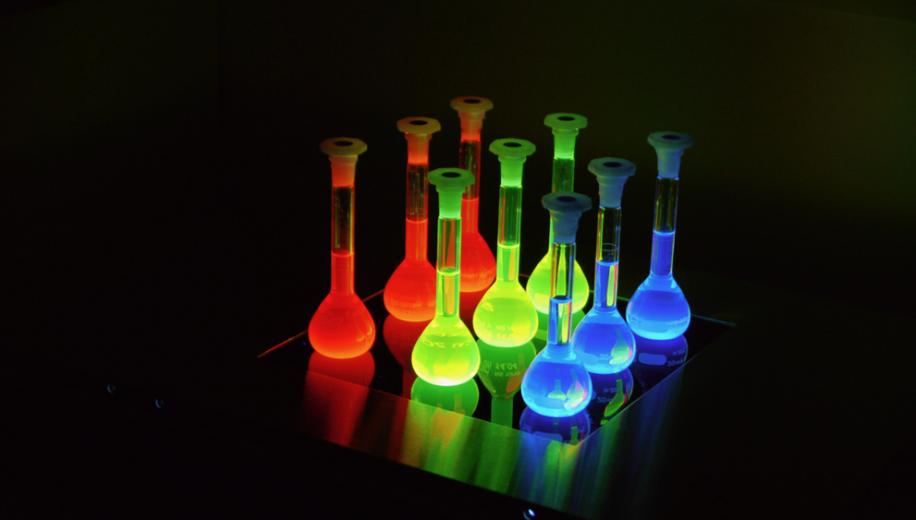 The words Quantum Dot have been used a lot over the last few years but what exactly is this technology and why is it important?
Despite sounding like a sci-fi TV series from the early 90s, the term 'quantum dot' was first coined back in 1988 and relates to very small semiconductor particles. When we say small we mean between 2 and 10 nanometres, which to put that into perspective is equivalent to about 20 silicon atoms. Quantum dots are so small in fact that their optical and electronic properties differ from larger particles. The use of the word 'quantum' does reflect certain aspects of the properties of these minuscule particles but what they really represent is an example of nanotechnology – that is the manipulation of objects at a subatomic scale.

These semiconductor nanocrystals, or dots, emit light of specific frequencies when electricity or light is applied to them, and these frequencies can be precisely tuned by changing the dots' size, shape and composition. That means if you select the right type of dots you can choose the frequency of light they emit and then suspend them in a solution, when you apply electricity or light they will glow with incredible precision. In the photograph at the top of the page, the test tubes contain quantum dots chosen to emit light at the specific frequencies for red, green and blue when an electrical current is applied.

Quantum dot technology has many practical applications beyond simply making test tubes glow in different colours and over the last few years it has been developed extensively by TV manufacturers. They quickly realised that if they added a coating of quantum dots over a blue LED light source they could not only create much wider colour gamuts but that they could also render better colours than white LEDs because the specific emission frequency of a particular quantum dot is much narrower and therefore more precise. The colour of light that a quantum dot will produce is directly related to its size, smaller dots appear blue and larger ones look red.

Quantum dot LEDs create more colours with greater precision, increase the peak brightness and reduce energy consumption
However quantum dots don't just mean that a panel can produce a wider colour gamut with far greater precision, it also allows that panel to deliver a much higher peak brightness. That makes quantum dots an essential component in delivering the increased specular highlights necessary for High Dynamic Range content. When you combine the wider colour gamut and higher dynamic range of a TV that uses a quantum dot LED backlight, you get an increased colour volume. This is a three dimensional representation of a TV's ability to show more colours at higher brightness levels, the larger the colour volume the more realistic the picture.

Quantum dot LEDs also use less energy which means that despite the increased peak brightness of HDR, TVs that use this technology can still deliver impressive power consumption figures. Although a number of TV manufacturers have advocated the use of quantum dot LEDs, the most vocal supporter has been Samsung. They were promoting the advantages of quantum dot technology at CES back in January and again at IFA in September, whilst the previous month they offered a 10-year protection against screen burn on their quantum dot TVs. The 10-year protection seemed like more of a dig at OLED but there's no denying that quantum dot LEDs do offer a number of advantages over competing technologies.

In fact Samsung have pointed out that on their latest KS Series of TVs, there has been a 15% increase in brightness over last year's models but this has been achieved with a 30% reduction in energy usage. Samsung's latest developments include a uniform arrangement of quantum dots and a nano capsule protective shell that reduces impurities and defects and also prevents oxidation. In addition Samsung's quantum dot technology is cadmium-free making it more environmentally friendly. The latest advances in quantum dot technology mean that their entire KS series can not only deliver a brighter image but also a wider colour gamut (96% of DCI-P3) and wider viewing angles. In another reference to OLED, Samsung also pointed out that since quantum dot LEDs use inorganic materials they can deliver consistent performance for a long time.

There has been a quantum leap (if you'll pardon the pun) in TV technology over the last two years and the move towards wider colour gamuts and higher dynamic range has resulted in manufacturers looking for ways to deliver ever brighter and more colourful TVs, whilst at the same time consuming less energy. Although no specific technology is perfect, there's no denying that quantum dot LEDs do offer solutions to many of the challenges that face TV manufacturers and it will be interesting to see what advances are made in 2017.