Seagal, Stallone, Van Damme, Statham and Lundgren, what more could you want? 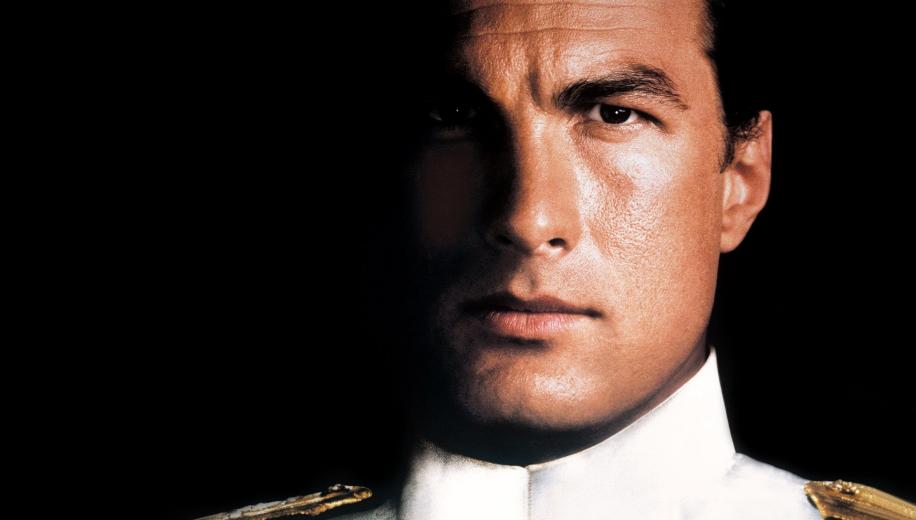 Amazon Prime don't quite have the quantity of original content that Netflix promotes, but there are a fair few guilty pleasures to be found from trawling their ever-changing catalogue titles.

Dolph Lundgren always sat on that lower tier during the action era, apart from the likes of Stallone and Schwarzenegger, and lucky if he got to go toe-to-toe with a bigger name like Van Damme (Universal Soldier) and Sly (Rocky IV). Nonetheless, he's an iconic entity in that action period, with Silent Trigger one of his lesser known - some might argue rightly - entries where he plays a sniper assassin on a dangerous mission in an unfinished skyscraper. Highlander director Russell Mulcahy clearly didn't have much budget to play with here, but makes the most of the single-set location, trading in some inventive flashbacks and a tense finale, as well as a sub-John Woo stylisation to the action.

Want more Dolph on Amazon Prime? The Punisher – cheesy, clunky, and oddly blending comic book extravagance with not-for-kids violence, this is almost a cult classic; a far cry from Berenthal's rendition in the excellent Netflix Punisher series, but a fun endeavour nonetheless, with an unstoppable Lundgren moodily growling his way through the sewers in search of bloody vengeance.

Jennifer Garner blasts back onto the screen after what felt like a long hiatus, having previously entertained in the superb Alias (back when J.J. was inventive), but fallen flat in big screen efforts like the lacklustre Daredevil spin-off Elektra. Peppermint hardly defies the standard revenge actioner formula, but Garner makes for a convincing and competent protagonist, taking up arms when her family are slaughtered. It's a far cry from the similarly themed The Rhythm Section, but that's not necessarily a bad thing.

Want more ass-kicking women on Amazon Prime? Try Luc Besson's bottom-tier Anna, useful for drinking games and hilarious inconsistencies (check out the superb 80s tech!), it's one of his worst films (despite being from the guy who did Valerian) but probably just about worth a free watch on Prime on a drunk night in.

8. Bullet to the Head

Walter Hill's better films (The Driver, 48 Hours, Red Heat) may be long behind him, but his modern western style still informs everything he makes, even the lesser works, and this flawed but entertaining adaptation of the French graphic novel series allows for some suitably macho latter-era violence from a fully-engaged Stallone, partnered with Fast & Furious's Han himself (Sung Kang) and facing off against a young Jason Momoa (Aquaman, See). It's worth watching for the final axe fight alone.

Want more old action icon movies on Amazon Prime? The Last Stand – A similar late-era entry in another ageing action icon's filmography, Arnie bounced back with The Last Stand, which offered small-scale but frivolously fun action as his old sheriff has to prevent an escaped convict from tearing through his small town.

Jock & Diggle's excellent The Losers graphic novel series was adapted by Peter "Lone Survivor" Berg, although it may have turned out better had the director helmed the piece itself, and may have garnered enough popularity to warrant making the second story. Nonetheless, flawed as it may be, The Losers is strangely and intoxicatingly fun, enjoying an excellent soundtrack (including Journey's Don't Stop Believin' and Ram Jam's Black Betty) and a hell of an ensemble cast, with a cooler-than-Clooney Jeffrey Dean Morgan (Watchmen) leading a team that includes Luther's Idris Elba, Captain America's Chris Evans, and Guardians' Zoe Saldana for some over-the-top straight-out-of-a-comic-book action.

Want more comic book action from Amazon Prime? Wanted - A similarly all-star cast including Angelina Jolie, James McAvoy and Morgan Freeman go for cool bullet-spinning action in this great fun adaptation which would have taken a prime spot but for the fact that, well, The Losers is just so damn underrated.

Never quite getting a shot at the big time, Michael Jai White is possibly one of the most underrated martial arts actors in the business (up there with John Wick 3's Mark Dacascos), and this was as close as he got to his own franchise, a taut and absolutely action-packed thriller that barely strings together a plot to allow White to kick ass across the globe. There are some absolutely staggeringly good martial arts set pieces here, with White never better than triple-kicking his way through a stream of red shirts, and it's only a shame that - even as just DTV entries - he never got the chance at a follow-up.

Want more Michael Jai White on Amazon Prime? Black Dynamite - Sure, there are a bunch of White action flicks on Amazon, all straight-to-DVD, and mostly of limited worth, and sure Black Dynamite is a comedy, but it's an excellent one at that and, if this weren't an action movie list, it'd definitely get higher billing. A fabulous send-up of the Shaft era of Blaxploitation flicks, yet still chock full of White's trademark martial arts, it's well worth checking out.

Denzel Washington's stranger wanders the desert battling Gary Oldman's ex-Mad Max minions in the post-apocalyptic western actioner, The Book of Eli, which may not quite fit the bill of the genre being observed here, but boasts some impressively staged action sequences nonetheless. And, well, Washington elevates just about anything he's in, no matter how generic it would otherwise be - you only need to look at the likes of Equalizer and ﻿Equalizer II for proof of that.

Want more Denzel Washington action on Amazon Prime? Man on Fire – A far better movie, but not strictly an action flick, and not exactly a guilty pleasure either, the late Tony Scott's hyper-stylised Washington kidnap/revenge thriller would have made for a tremendous franchise for the long-running book character; a missed opportunity considering the quality of this memorably quotable and violent affair.

Deeply, deeply underrated and overlooked, primarily because it's ostensibly just another straight-to-video flick starring an ageing Van Damme and the not-quite-even-B-list Scott Adkins, and also, ostensibly, just another entry in the Universal Soldier franchise (which was hardly groundbreaking in the first place), Day of Reckoning is actually one of the best straight-to-video movies of all time. None other than Outland director Peter Hyams worked on both this and its also underrated predecessor, Universal Soldier: Regeneration, with his son taking on directing duties and delivering surprisingly well staged, thoughtfully plotted far-above-average martial arts sci-fi action fare. Few will get past Adkins' bone-breaking ultra-violent clashes with UFC heavyweight champion Andrei Arlovski, but if you do, you may realise you're basically in a superbly plotted, twist-laden psycho-thriller that trades its genre restrictions for a path ripped straight out of Apocalypse Now - to superb, at times hallucinogenic - effect. Van Damme and Lundgren back in action are just the cherries on this cake.

Want more Van Damme on Amazon Prime? Lionheart – This early era Van Damme actioner still has heart, as the Muscles from Brussels goes AWOL to do some underground fighting for his family, although if you want something a little more tongue-in-cheek, Jean-Claude Van Johnson is an abortive Amazon Prime Original TV series that has a hilarious premise (and pilot) but loses steam and ideas quickly, even if it's nice to seen Van Damme not taking himself too seriously, whilst taking himself seriously.

An unexpectedly good third entry in the 'Fallen' franchise - which is rumoured to be getting a whole second trilogy - Angel Has Fallen defies its limited budget and shoddy effects (the practical pyrotechnics at the start, and in the scene-stealing Nick Nolte sequences are far superior to the building-shaking finale) to remain a solid actioner from Gerard Butler who, we can't forget, surprised us in the first place with his pleasantly violent throwback action flick Olympus Has Fallen to kick start this whole franchise.

Want more 2019 action on Amazon Prime? 21 Bridges - Well this just landed, surprisingly early, presumably due to the lockdown, with Black Panther's Chadwick Boseman elevating this fun and frantic genre entry. It's just a shame there aren't really that many bridges of relevance here (even more ironic given the original title was 17 Bridges)..

Action fans will likely have a soft spot for Jason Statham, who almost single-handedly kept the genre alive in an era where all the old icons were flagging with no-one new to take their place. His Transporter films are huge fun, but he's often underestimated in his attempts to do something different - the wacky insanity of Crank is not to be forgotten. Unfortunately, almost all of his more dramatic turns were largely ignored, leading to an increasing number of roles where they clearly wrote in unnecessary martial arts scenes just so he could do what he does best. Nonetheless, many of these are worth checking out for the attempts to do something a little bit different within the genre (and studio/typecast) restrictions, including the likes of Blitz and Hummingbird, and this title, Safe, which is enthusiastically stylish, impressively innovative and refreshingly unpredictable, seeing Statham's believably suicidal ex-cop reluctantly forced back into action when he comes across a young girl being kidnapped.

Want more Jason Statham on Amazon Prime? Wild Card, Parker or Transporter 3 – With no Blitz on Prime, you mostly have to make do with some of Statham's other flawed fare, Transporter 3 being the worst-by-far of the Transporter films, Parker being a wasted shot at bringing the character from Lee Marvin's crime classic Point Blank and Mel Gibson's impressive later adaptation, Payback, into a modern franchise, ill-advisedly injecting an unnecessary Jennifer Lopez and largely unnecessary (but for, well, Statham) action into the disjointed thriller, and Wild Card doing similarly odd work on remaking Burt Reynold's original. Enjoyable in parts, they're flawed fare most notable for Statham's consistent attempts to at least try and do something different. And don't even try to understand the mess that is War, his team-up with Jet Li. Thankfully, there is Hummingbird - which you'll find under the title Redemption - and it's worth checking out for something a little different from The Stath.

Die Hard spawned myriad replicants over the years, following the formula in a number of different settings with mostly memorable results (from Die Hard 2's own airport setting, to Speed's bus, Sudden Death's stadium, Cliffhanger's mountain, The Rock's Alcatraz, or even the recent Die Hard-in-the-White House, Olympus Has Fallen - trumping White House Down), but Under Siege spun the formula slightly whilst also giving then-upcoming action star Steven Seagal his chance to showcase his unusually impressive aikido martial arts techniques and surprising proficiency with weapons, as his "I also cook" Navy Seal goes up against a wonderfully over-the-top Tommy Lee Jones and Gary Busey on a terrorist-infested battleship. Seagal's success here would go to his head and see his career take basically an up-and-down nosedive after this, but here he was on absolute fire, turning in some cracking set pieces, and memorable face-offs, including a superb improv fight with lots of painful machinery and a tremendous closing knife-fight.

Want more Seagal on Amazon Prime? Under Siege 2: Dark Territory - There are plenty of Seagal duds on here - he's done plenty - including such masterpieces as Code of Honour, End of a Gun, Contract to Kill and Killing Salazar, with even his earlier The Patriot a distinctly odd Seagal offering where he basically tried to eschew martial arts in favour of a homeopathic variation on Outbreak. But Under Siege 2 largely replicates Seagal's Under Siege fun, only on a train, with some solid action and the then-unusual sight of a suited martial arts action star kicking ass (c.f. John Wick).

Talking of John Wick, you might wonder why Keanu Reeves' excellent career-comeback action extravaganza (currently available on Amazon Prime) isn't headlining this list? Well that's because it's hardly a guilty pleasure if it's a genuinely superb action movie. What trashy, maybe even so-bad-they-are good action flicks available on Amazon make your list?