In its current state, Titanfall on PC is a fantastic shooter with room for improvement. 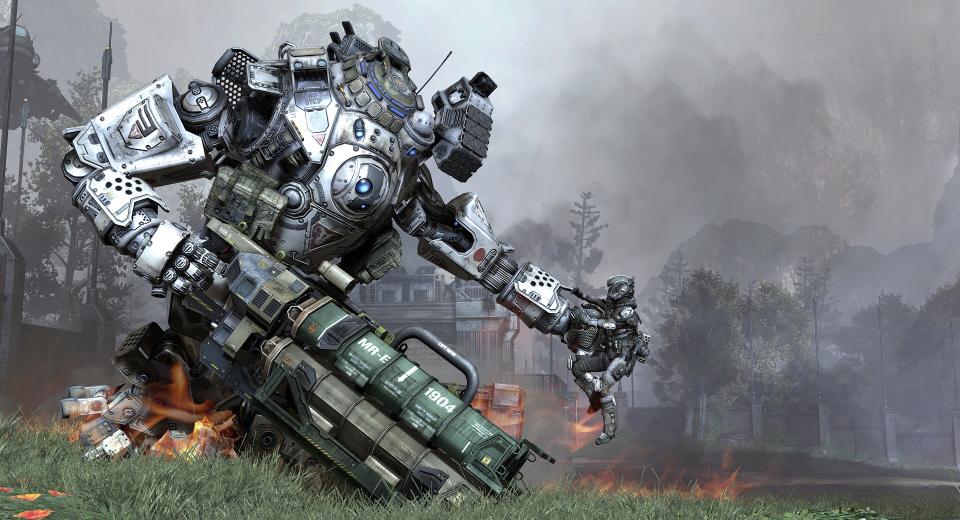 When considering Titanfall’s place in the lineup of modern-day shooters, for me it sits clearly in-between the run-and-gun rhythm of a Modern Warfare and the emergent gameplay you only find in systems-heavy games such as Battlefield. Titanfall is both of those games at once, condensed to their most enjoyable elements and delivered to the player at an adrenaline-charged pace. Although marketed heavily as an Xbox One poster child, Respawn's PC version of their flagship shooter deserves a lot of praise for getting a whole bunch of the fundamentals right, even if it does leave room for structural improvement over the long-term.

Whether you’re experimenting by leaving your Titan on auto-guard at a hardpoint or swinging your way through windows as an angry ghost with a shotgun, this is a game that's pleasingly fluid even on modest hardware. My mid-range i5 with a 2GB 660 Ti barely broke a sweat when running the game on high settings at 1080p and 2x MSAA (QCSAA is also available for those in the green camp) with only the switch to ‘insane’ texture resolution unearthing an occasional framerate dip during infrequent moments of close-quarters mayhem (f you have a 2GB+ card you should be golden for maximum texture resolution).

Shadow settings, as always, seem to provide the best bang-for-buck if you're looking to increase performance at a slight cost to visual fidelity (again, hardly noticeable during fast-paced action), while the FOV can also be tweaked marginally upwards to 90 - at least acknowledging PC flexibility without compromising too much on performance or providing too much of an advantage for competitive play. Upping the FOV did make a slight difference to my average framerate, but for the most part Titanfall's Source Engine tech seems to scale pretty well through its range of viewing angles.

The downside to that focus on performance is that when compared to other PC titles, with the best will in the world Titanfall could hardly be described as a looker even when running at that buttery-smooth 1080/60. Thankfully Respawn’s art direction and animation more than makes up for occasionally flat lighting and fuzzy texturing. As this is a game that prioritises smooth, graceful action above all else, it's also worth pointing out that my experience has been pleasantly devoid of any ruinous screen-tearing to mar that sense of fluidity. A good sense of speed and motion was always going to be a key facet of Titanfall’s visual appeal, and pretty much every aspect of human and robotic animation has been knocked out of the park. There’s incredible detail to even the smallest of actions, with the level design working to constantly provide opportunities for dramatic showdowns or rooftop getaways that look breathtaking whether viewed from the ground or 20ft in the air and encased by armour plating.

Both mouse and keyboard and gamepad controls are viable and competitive in those situations, and your march up the leaderboards isn't going to be significantly altered if you prefer a 360 controller or a Dualshock 4 in front of the TV.

As you could probably guess, mouse control does hold a small amount of sway when it comes to sniping or using the twitch-heavy pistols (mouse acceleration can be tweaked to your preference), but Respawn have worked wonders to fine-tune analogue sensitivity and offer a range of weaponry with semi-automatic aiming modes that somehow never feel cheap when using the sticks. Wall-running and bunny-hopping around the environment is flexible but automated to such an extent that neither mouse or pad seems to have a significant advantage, while strapping yourself into a Titan feels a marginally better fit for a controller.

The skill ceiling is high no matter which control setup you choose, with plenty of scope for one-upping your opponents with a variety of ordinance and tactics that don't require razor-sharp reflexes to deploy.

In terms of the much-speculated server stability, throughout this opening week and a half both Origin and Microsoft’s Azure-based network seem to be coping well with demand, with only a few brief blips in the sign-in process to mar any good will for early adopters. Pings have been consistently low as matchmaking seems to pull together players with similar connections (but wildly different skill ratings, which is a shame) and lag has been minimal in my experience. Titanfall's focus on scale and depth seems an excellent fit for PC overall, happily sitting alongside the likes of Counter Strike and TF2 as experiences that can whittle away 15 minutes or six hours at a time. In the short period since launch it's already overtaken Hearthstone as my favoured go-to game; although maybe that's the deck of Burn Cards making for a painless transition.

It's good then, but with that said, the problems for the PC version of Titanfall were always likely to come in the long run, when seasoned players are looking to mods, private dedicated servers, a robust anti-cheat system and clan support to expand and maintain the long-term and competitive appeal. None of those features are likely to make their way into the game any time soon (with the exception of anti-cheat technology, which is apparently coming very shortly), and their absence is perhaps too easily associated with Respawn tying itself so closely to the Xbox One and Microsoft’s guarded servers.

While It'll be a heck of a shame if we don't ever get to see Titanfall's life extended by mods, even in it’s current state, this is a game that represents one of most tightly-balanced shooters on the market.

Sure, it's structurally barebones by any yardstick, but each of Titanfall's finely-honed gameplay systems works in unison to generate blistering combat "moments" with a frequency I’ve not experienced since the early days of Battlefield 2. Every game offers a unique challenge, something new to learn or somebody showing off in an unexpected fashion, and for as long that lasts, Titanfall will continue to compare favourably to the genre heavyweights.

There's no better place for Respawn to showcase its début shooter than the PC, so let's just hope a little more structural depth is planned for deployment alongside those inevitable DLC map packs. If ever there was a game that deserved a long tail, then this is it.