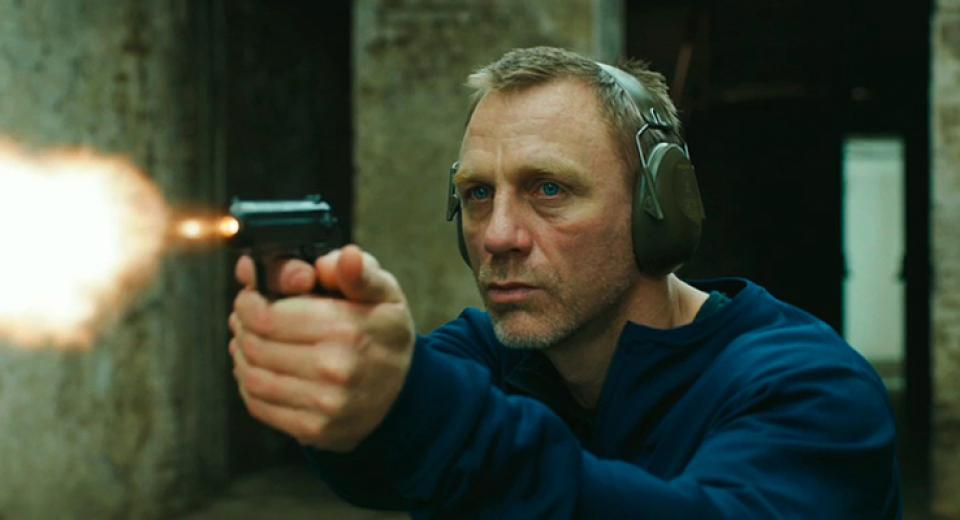 2011 seemed like a relatively easy year to find a Best Film.

Although the likes of Terrence Malick’s Tree of Life, the underrated Tom Hardy MMA movie Warrior and the latest adaptation of John Le Carre’sTinker Tailor Soldier Spy came close, it was Nicholas Winding Refn’s indie masterpiece Drive that secured the top spot, the only new release awarded a 10/10 over the entire year.

2012 proved a little more tricky, and whilst we got several defining ‘best in years’ genre staples – the Best Pure Action movie in years; the Best Sci-fi movie in years; perhaps even the Best Bond in years – it was harder to define the year with clear 10/10 winner. Indeed I’ve ended up not only putting them into a Top 10 numerical order, but also awarding each and every entry my own personal Best Of ‘title’.

Missing the cut was Nolan’s thunderous finale, The Dark Knight Rises, which did not quite live up to the standards of its predecessor, the genre-defining The Dark Knight – instead attempting to cram two movies’ worth of story into an admittedly epic runtime. It still proved to be a largely satisfying, thoroughly enjoyable, and suitably grandstanding end to Christopher Nolan’s defining Batman reboot trilogy, however.

Also failing to hit the top 10 were the fantastic family tragedy drama, The Descendants – featuring another seminal performance from Clooney – the underrated Joss Whedon anti-horror, The Cabin in the Woods – which boasted all the usual pop culture wit you’d expect from the man behind Buffy, Serenity and The Avengers; and the highly anticipated Lawless, which featured an all-star cast – including another standout performance from Tom Hardy – and should have been a great period gangster flick but, through a slight lack of focus and an anticlimactic ending, ended up missing the mark. If these were getting places, however, they’d earn Best Family Tragedy Drama, Best (Anti-)Horror and Best Tom Hardy Performance Awards in the Top 10.

As it is, we’re left with what will undoubtedly be quite a divisive selection, hopefully rounded out with a few clear cut winners, and, no, sorry, I refuse to include Prometheus, even though Ridley Scott’s frustratingly incoherentAlien prequel would have easily earned Most Flawed Must-See Movie Of The Year.

And the tail-end big boys – The Hobbit and Life of Pi – both had their attackers and their defenders, but neither made my cut as I’m still frustrated (and a tiny bit worn out) by having to wait for two more movies to finish The Hobbit, and I’m still not completely sold on the undeniable 3D spectacle that was Life of Pi. 10. Jack Reacher
Creeping in by the skin of his teeth, Cruise’s sleek and surprisingly well-regarded introduction to Lee Child’s massively popular Reacher book franchise provides easily The Best Old-School Detective Thriller Of The Year. A superb close to 2012 and a fitting number 10 entry to this list, Jack Reacher is a cracking little thriller which should both please most die-hard fans of the books whilst also introducing the world to one of the greatest hardboiled detective characters ever created. With Cruise taking a tough and slightly different, more hard-nosed direction – but providing his usual 110% commitment – and director Christopher ‘The Way of the Gun’ McQuarrie serving up a deliciously sharp script and some pretty-brutal-for-a-12A(PG13) action scenes, this is one of the few titles on the list which you still have the chance to check out at the flicks. Go. Now. 9. Safety Not Guaranteed
Made on a shoestring budget of less than a million, Safety Not Guaranteed has wooed critics across the festival circuits, and has been cited as The Most Overlooked Film Of The Year. It’s easy to see why. With charming and authentic performances from a quartet of relatively fresh new faces, and a witty and suitably cynical script perfectly tailored for the modern generation, this is one of those movies which manages to tell a tale of rose-tinted retrospect and soul-searching without either the wannabe weighty baggage of the average drama, or the saccharine-sweet sentiments of the average comedy-drama. Sure, it’s an indie movie through and through – and that fact alone is put off huge swathes of people that were busy spending an eleventh hour with the little people or giving Cruise another chance to convince us he can be a tough guy – but you shouldn’t miss the opportunity to check out this quiet little film from out of nowhere. It may just win you over. 8. How I Spent My Summer Vacation (aka. Get the Gringo)
Well it’s not going to be on anybody else’s list but I loved Mel Gibson’s little indie crime drama. However hard you find it to put aside any personal views you may have about him, he’s still a quality actor and his latest film provides a welcome distraction that may help you forget the controversies, and remind you of precisely what he’s good at. With proper studio backing, a bigger budget, and the relevant copyrights, this could have easily been an official sequel to Payback, but Gibson’s too much of a Hollywood pariah at the moment to get any of those. Instead he’s written, funded and starred in what is essentially an unofficial sequel. Making the most of its unusual location, and with Peckinpah-edged stylisation from the director, it has Gibson back at his hardboiled best: conning, charming, wise-cracking and shooting his way through a colourful Mexican prison with all the punch and panache he’s always brought to these wittily-scripted action-crime-thriller roles. Recommended as arguably The Most Underrated Movie Of The Year. 7. Argo
The Best Movie-Based-On-A-True-Story Of The Year, maybe Argo doesn’t boast grand stunts; epic setpieces; powerhouse performances; or intense action sequences, but this is every bit a brilliant spy thriller, perfectly engineered by writer/director/actor Ben Affleck, driven by his central performance, and superbly rounded out by a slew of supporting contributions. It is one of those very rare movies that takes a true tale, and tells it in a way which is at once both respectful and authentic when it comes to the real events, whilst also blisteringly exciting in its non-stop tension across the duration. Masterful filmmaking, impressive acting, with a script that blends bitingly witty satire with truly moving real-life exploits – honestly, what more could you want? 6. Avengers Assemble
Aside from earning The Best Superhero Movie Of The Year, Joss Whedon’s monumentally successfully Avengersgave us something the comic-book-loving world thought that they would never see: our first ensemble superhero blockbuster. Whether you absolutely loved it, or just like it A LOT, the movie will surely go down in film history –Marvel’s Phase 1 was such an ambitious plan that I doubt we will see anything quite like it again (well, other thanPhase 2, but that won’t be much of a gamble in comparison). What other Studio has risked launching four independent comic book superhero franchises – across 5 movies – with an end-game of pooling them all together in one giant movie? Stunning, must-see, and watching all of the movies in order first only adds to the joy. Can’t wait for Shane Black’s Iron Man 3. 5. The Grey
It’s difficult to know whether or not this should be awarded The Best Survival Drama Of The Year, as it’s far more than just 2012’s version of The Edge (however great that Hopkins/Baldwin thriller was). The Grey marks an absolute career-high for both frustratingly hit-and-miss director Joe Carnahan (who can flip from The A-Team toNarc in a heartbeat) and also late-bloomer action-man Liam ‘Taken’ Neeson, crafting a psychological and metaphysical voyage into what is very literally a fight for your life, and providing a film that is just about as far away as you can get from the wildly misleading ‘Neeson punching wolves’ action trailer that promoted it. Prepare yourself, this punishing ride cuts deep and leaves scars – easily one of the best movies of the year, and all the way back in January. 4. The Raid
Arguably not only The Best Action Movie Of The Year but also the best pure action film in a decade, Welsh director Gareth Evans’ Indonesian project, The Raid, is one of the most intense, gun-toting, knife-slashing, bone-cracking, neck-breaking movies ever made. It at once combines Western sensibilities with Eastern action, using a variation of Die Hard’s mould-setting plot, adding themes and stylisation from John Woo’s seminal masterpiece,Hard Boiled, and setting it against the kind of oppressive, against-the-odds, backdrop you’d expect from John Carpenter (Assault from Precinct 13). Injected into this are fight scenes that combine the furious and jaw-droppingly imaginative choreography of a Jackie Chan movie with the sheer elbow-to-your-face brutality of Tony Jaa (Ong Bak). Indeed, for those familiar with Oldboy, much of The Raid plays out like a feature-length version of that hammer fight scene. It’ll leave you feeling busted and broken, but exhilarated more than any other movie in a long time. 3. Looper
The Best Sci-Fi Movie Of The Year and probably the best time-travel movie in the last 15 years, Looper is superbly acted, impressively directed and extremely well written. It’s got a fantastic cast; a well thought-out plot which twists and turns through a largely coherent time-travel scenario; dialogue injected with some refreshing wit; and heavy performances from all the least expected directions – not least the increasingly reliable Joseph Gordon-Levitt, but also Bruce Willis at a career high, playing a haunted hitman from the future. It provides two hours of thrills and a bucket-load of surprises, as well as a few excellent action beats. This is a movie that demands attention, requires feedback, and warrants discussion. It’s a great movie that will make you think, even if you don’t realise it at first. Hitting Blu-ray any day now, hopefully those who didn’t get the chance to see this at the flicks will get the opportunity to rectify that mistake. 2. Dredd
A strong contender for the absolute best film of the year, and certainly both The Best Comic-Based Movie Of The Year and The Best Sci-Fi Actioner Of The Year, Dredd was something of a sleeper surprise amidst the comic-book adaptations, providing to be not only a defining interpretation of the classic neo-fascist law enforcer; not only a genuinely good use of the previously-largely-gimmicky 3D filming style; but also a damn good sci-fi action-thriller in its own right. It’s just a shocker that the film hasn’t proved definitively successful in terms of Box Office receipts (perhaps because of its 3D-only screenings), leaving a sequel – which fans are universally crying out for – still uncertain. 1. Skyfall
The 23rd Bond outing was a suitably fitting climax to a year-long celebration of 50 years of Bond (which also saw all 22 preceding films being released in a lavish must-own boxset). Although there was a surprising amount of criticism levelled at this outing – not enough Bond traits; no supervillain’s lair climax; no true Bond girl; too much Bourne; too much dialogue; too long – many thought it was a superb conclusion to Daniel Craig’s Bond reboot trilogy, finishing off the character arc instigated by the great Casino Royale, nearly derailed by the disappointingQuantum of Solace, but brought back on track here. Certainly it sets this new Bond up for what could be the ultimate classic Bond outing next time round, and certainly it was one of the better movies this year, even if it didn’t make everybody’s Best of 2012 list. Personally – and controversially for many, no doubt – it just edged out Dredd to become The Best Film Of 2012.