They missed the boat not selling Tenet face-mask merchandise. 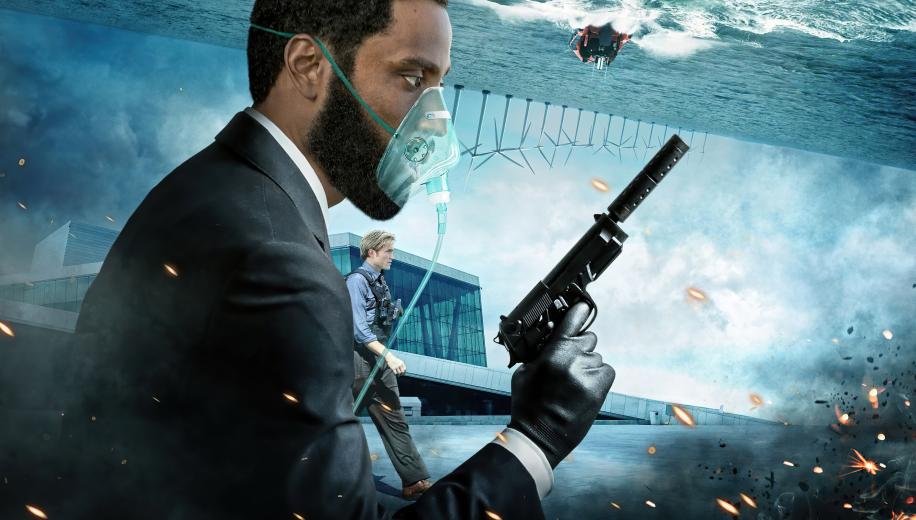 Back at the start of the year, the question wasn’t whether you would see Tenet, it was which film you were going to see first in the same day, Tenet or Top Gun 2. Friday 17th July 2020 was shaping up to be something special, something memorable.

Even as Covid unravelled, it was hard to think more than the next day. Initially it felt like it was barely affecting the UK (for reasons the public would find out later, much to their dismay), but even when it hit hard, people were only thinking two weeks at a time - three months down the line surely we’d be in the clear? And what better way to kick-start the summer and return to the Big Screen than this kind of kick-ass double-bill?

Then everything dropped off the slate. EVERYTHING. A few titles were left in for late 2020, the majority were pushed to 2021, which felt like an eternity away. And the mandatory mask-wearing public were left wondering how exactly cinemas would even survive, let alone return to any kind of semblance of normality.

For some, being front facing has been the norm throughout, so returning to the cinema is just another walk in the park. When cinemas did reopen, these folks were greeted with endless reruns of childhood classics, which is a nice touch, but precious few new entries.

Black Water: Abyss was hardly going to reboot the Box Office. There were a slew of indie titles, like Proxima and Saint Frances, which likely enjoyed more prominence with nothing big from Disney to overshadow them. But something big was needed. And nobody was prepared to go the distance.

Apart from one man: Chris Nolan.

Day One Chris Nolan had turned into, "yes maybe somewhere down the line but possibly on streaming", which was something few fans could have anticipated at the start of the year

Through all of this, as Studios made concerning deals to release content on Premium VOD - Universal’s Trolls: World Tour being the first controversy, but Disney’s recent decision over Mulan coming across almost like the nail in cinema’s coffin - Chris Nolan (seemingly backed by Warner) has insisted that his latest, highly anticipated epic NEEDS to be seen on the Big Screen.

Surviving three delays, and expectations from most that it wouldn’t hit theatres until end of the year at the earliest, Nolan and the studios were so intent on releasing it theatrically that they even decided to forgo the seemingly intractable global release model in favour of a looser rollout - with the UK getting it a week earlier than the US.

The question now, is whether people will actually go.

Personally, I had Tenet as top of my 2020 list. Sure, I’ve got a soft spot for Top Gun 2, and Dune has the potential to be epic, but I was all-in for Nolan’s latest, the less I knew about it the better. Hell, even the thought of the trailer for Inception still gets me chomping at the bit for a rewatch, and I’ve never been disappointed, even when he turned what should have been a two-part finale to Batman into the flawed but blisteringly entertaining Dark Knight Rises.

Nolan, much like Cruise, still makes movies that demand to be seen on the Big Screen. But did I want to return to the Big Screen? Well yes, but mostly I wanted to return to the one in my memory. The one I’d been going to since the early nineties, probably on average once every couple of weeks, but for a period almost certainly weekly, where I could sit back and enjoy being engulfed by the latest work - whether it be the wow factor of The Matrix, the surprise of Drive, or the jaw-dropping awe of Inception.

Have to say, it feels like we’re a way off that. And possibly, if we go another few months like this, it might never come back. Returning is a debatable risk for many, but with a periodically vulnerable daughter at home, it wasn’t one I even really considered.

Day One Chris Nolan had turned into, yes maybe somewhere down the line but possibly on streaming, which was something few fans could have anticipated at the start of the year. But here I am, having booked tickets for Friday night, the earliest convenience that works with the day job (has anybody else noticed how, during lockdown, you basically have to be available all the time because, well, it’s not like you can go out?) choosing careful positioning with no row in front allowing distance and easy exiting, and likely empty disabled seating on either side, all the while intensely wary of the fact that I don’t like wearing a mask for half an hour in Asda, let alone three hours in a cinema screen with a bunch of strangers a whole lot closer than any meters.

Do I take popcorn or not? Do I buy it there? Will I struggle not to pull the mask off halfway through just to get some air? I don’t even know how front line workers wear these damn things all day long, but none of this really feels like how a relaxing night at the movies should be. Honestly, give me a screening link and I’ll review the hell out of it at home. But this, this isn’t anywhere even close to how I expected to be ‘anticipating’ the latest Nolan film.

How are you finding the return to the cinemas? If you haven’t been yet, will Tenet push you to take that risk? Or are you happier to wait? Let us know, and expect the AVF Review to come late Friday night, after the epic experience of Tenet in times of Covid.