Can you put together a separates system for less than a 'bar and sub combo? 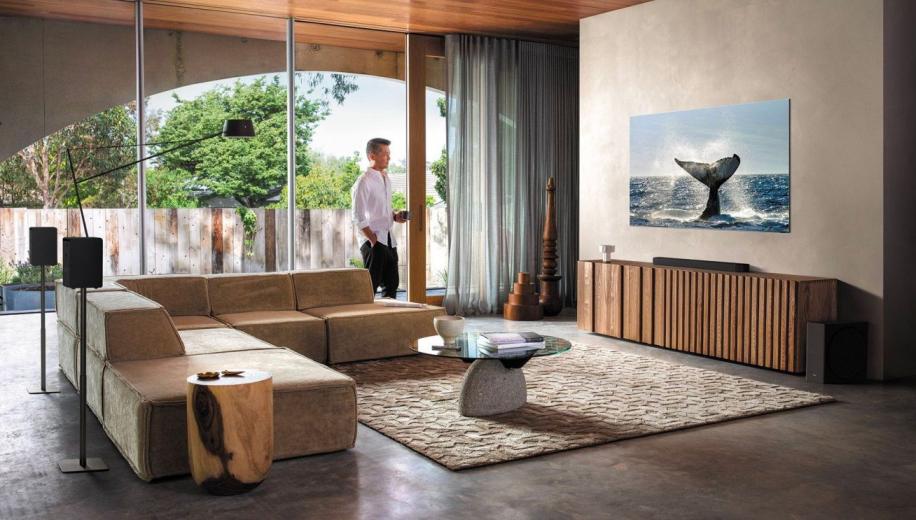 It’s the age-old question: do I buy a soundbar or an AV receiver and speaker package? It’s probably the audio-related inquiry we get more than any other here at AVForums, and it regularly pops up in the threads attached to reviews of higher-end soundbar systems.

On the face of it, the answer seems fairly obvious: an AV receiver and speaker package will offer a superior sonic experience. However, there are a number of other factors to consider, and while an AVR plus speakers and sub might sound better overall, a soundbar will be cheaper, easier to install, less intrusive and probably more acceptable to partners who are less interested in audio and video.

What to look for in a soundbar

Let’s run through all these factors and weigh-up the pros and cons, starting with convenience. This is an area where soundbars have a clear advantage, with the most basic system consisting of a main unit that you simply connect to your TV via HDMI and plug into a wall socket. Aside from deciding whether to stand- or wall-mount the soundbar, there’s not much else to consider.

You can send lossy audio back from your TV to the soundbar via HDMI-ARC, and lossless audio if both TV and soundbar support eARC. If not, and the soundbar has HDMI inputs, you can connect lossless sources directly instead. The result is a tidy and unobtrusive audio enhancement for your TV that may also add other features such as multi-room audio and smart assistants.

Naturally, being an AV fan you‘re going to want a dedicated subwoofer, so you can enjoy deep bass. There are often single unit soundbars that claim decent bass, but you really want a separate sub with a 6- to 8-inch driver to reach those thumping lower frequencies. The good news is there are plenty of soundbar and subwoofer systems, most of which connect wirelessly to allow for easier installation.

So even a soundbar with a separate subwoofer should still be a piece of cake to setup. The main issue will be finding a discreet spot for the sub, and remembering that while it might connect to the 'bar wirelessly, you will need to plug it into a power socket. Most soundbar subs are designed to match the main unit, and should retain a similar understated appearance and sleek styling.

A soundbar is an affordable and convenient way to add Atmos and DTS:X immersive audio with the minimum of fuss

So far the soundbar wins in terms of convenience, discretion and ‘partner acceptance’, but what if you want greater immersion? This is where things get interesting, with many soundbars claiming to support surround sound and even immersive audio like Dolby Atmos and DTS:X. However, this is an area where you'll need to manage your expectations.

First of all, if a soundbar has 3.1 channels and is claiming to support immersive audio that means it’s using psychoacoustic processing. While this approach can give a soundstage increased presence, it’s no substitute for actual speakers. So if you want Atmos and DTS:X support, you should be looking at soundbars with upward-firing drivers for the overheads, and maybe side-firers for width.

There’s no doubt a soundbar with upward-firing drivers can create effective overhead channels, although that will depend on your ceiling – the more reflective, the better. However, the experience will be front-heavy, with little rear presence. A lot of soundbars, some of which are very expensive, claim to create surround channels by reflecting sound beams off the side and rear walls, but there’s no substitute for actual speakers behind you.

There are a number of soundbars that offer the option to add wireless rear speakers, although this increases the overall cost. This approach also only adds surround channels, so you’re still missing the rear overhead channels for object-based soundtracks. However, there are some soundbar systems that come with wireless rear speakers that include built-in upward-firing drivers.

These tend to be the more expensive flagship soundbar systems, such as the LG SN11RG or Samsung HW-Q950T, and are usually the models where an AV receiver is considered as an alternative. This is a fair, because these soundbar systems can cost as much as £1,600 when new, which puts them in direct competition with AVRs and speaker packages. But is this comparison fair, and what are the advantages of going down the receiver route?

What to look for in an AV receiver?

However, a decent AV receiver will also support all these features, and often many more. For example, some might include other audio formats such as IMAX Enhanced or Auro-3D. In addition, an AVR will almost certainly have significantly more HDMI inputs, which is useful if you have a lot of sources. AVRs are also starting to add HDMI 2.1 support, which is rare on a soundbar.

An AV receiver might be more expensive and less discreet, but in terms of features and performance it can't be beat

In terms of other AVR features there will be multiple analogue and digital inputs, possibly a phono input for a turntable, multiple zones, and maybe even a built-in FM/DAB tuner. An AVR will also have a better remote control, along with a proper display that’s visible, easy-to-read and informative. There will also be a more detailed menu system, and probably an onscreen display for accessing it.

While many of today's higher-end soundbars are genuinely impressive in terms of performance and number of channels offered, it stands to reason that an AV receiver will outperform them. An AVR simply has more power, and when combined with larger speakers and a bigger dedicated subwoofer, the delivery is inevitably superior – it's simply a matter of physics.

Soundbars are usually fairly easy to install, with basic setup options and even automated calibration features in some cases. However, an AV receiver will offer greater flexibility in terms of setup, and probably include some form of sophisticated room correction, such as Audyssey, as well as a dedicated microphone for taking acoustic measurements.

So if AV receivers offer more features, increased flexibility and better sound quality, what's the catch? The obvious issue with the AVR, speaker and subwoofer system is that it won't be as discreet or convenient as a soundbar. You'll have a big box with wires running to five speakers that will need to sit on something, a subwoofer and four upward-firing modules if they aren't built-in.

However, besides convincing anyone who shares your lounge that a big black box can blend into the surroundings, that speaker stands or brackets aren't ugly, and that you can effectively hide the speaker cables, there is one other issue – price. So will a soundbar system always be cheaper than a comparable package composed of an AV receiver, speakers and subwoofer?

Can you buy a new AVR, speaker and sub for less than a comparable soundbar?

For the purposes of this section we'll use the Samsung HW-Q950T soundbar as our starting point. This excellent 9.1.4-channel system was a multiple winner in this year's AVForums Editor's Choice Awards, and is among the best soundbars you can buy. It's recently had a price drop, and currently retails for around £1,299, so that's how much we have to spend on an AV receiver, speakers and a subwoofer.

I'm going to ignore accessories like interconnects, stands, brackets and speaker cable, and simply concentrate on buying the necessary hardware components for the system. In addition, although the HW-Q950T is technically a 9.1.4-channel system, to have any chance go building something for £1,299 I'm going to choose a seven-channel receiver running a 5.1.2-channel speaker system.

I'll also look at speaker packages that use upward-firing modules to create the overhead channels, because if installing speakers on the ceiling is an option, then cost and convenience aren't factors and you really should be considering a separates system rather than a soundbar. Right, let's have a look on-line and see what's available.

There are numerous speaker packages available, but most support 5.1-channel layouts. Thankfully there is one option that stands head-and-shoulders above the competition, offering a 5.1.2 channel configuration at an affordable price. The Focal Sib Evo 5.1.2 (£699) is an excellent speaker package that not only sounds superb and comes with a decent subwoofer, but has upward-firing drivers built-into the front left and right speakers, making for a tidier solution.

So, by adding the Focal Sib Evo package to any of the AV receivers listed above, you've got an impressive 5.1.2-channel system for around the same price as the Samsung HW-Q950T. In fact you can currently pick up the Denon AVR-X2700H and the Focal Sib Evo as a package deal for £1,249, leaving you £50 for speaker cable!

The great thing about the Focal Sib Evo range is that, if you want, you can buy an extra pair of the front speakers, swap out the rears and create a 5.1.4-channel system. You could even have a 7.1.4-channel layout if you retain the original rear speakers as side channels.

Off course, if you do this you're going to need more channels of amplification and that's where things get expensive. There's no way to buy a new nine or 11-channel AV receiver and still be able to stay within the budget of £1,299. But what if you don't need all the latest bells and whistles, and are happy to buy a second-hand AV receiver or speaker package?

What about using the Classifieds?

You may not be aware of this, but AVForums has an entire Classified Adverts section dedicated to selling second-hand kit. If you're looking to buy or sell anything AV-related, this should be your first port of call. Aside from the fact that unlike eBay there are no fees, you are also dealing directly with a community of people who are specifically interested in audio and video.

There are sections dedicated to TVs, home cinema, Hi-Fi, movies, music, and all manner of tech and gadgets. The sales threads are fully moderated and there's a ratings system to ensure you can trust whomever you're dealing with. It really is the ideal resource for anyone looking to buy or sell used AV equipment, and it's completely free!

A quick look through the Receiver and Amplifier Classifieds reveals 9-channel AV receivers such as the Marantz SR6012 or the Yamaha RX-A3050 for around £500. There's also a Speaker, Subwoofer and Soundbar Classifieds section, so you could look for speaker bargains and gradually build up an immersive multi-channel speaker system.

However, at the moment you'd be hard-pushed to find better value than the Focal Sib Evo package, even in the Classifieds. But if you can pick-up a 9-channel AV receiver in the Classifieds for around £500, you could still buy the Sib Evo 5.1.2 package and replace the rear speakers with a second pair of front speakers with built-in upward-firing drivers and enjoy a 5.1.4-channel system within the £1,299 budget. If you were prepared to spend a bit more, you could even get an 11-channel AVR and have a really impressive 7.1.4-channel system that would blow any soundbar out of the water.

All that being said, it's also worth remembering that at £1,299 the Samsung HW-Q950T is fantastic value for money, offering Dolby Atmos and DTS:X support using a convenient and discreet 9.1.4-channel system. So, whatever you decide to do, there are no losers here, and everyone can get the system they desire without breaking the bank.