Find them on Netflix...or Amazon...or Apple, maybe. I don't know, do your own research! 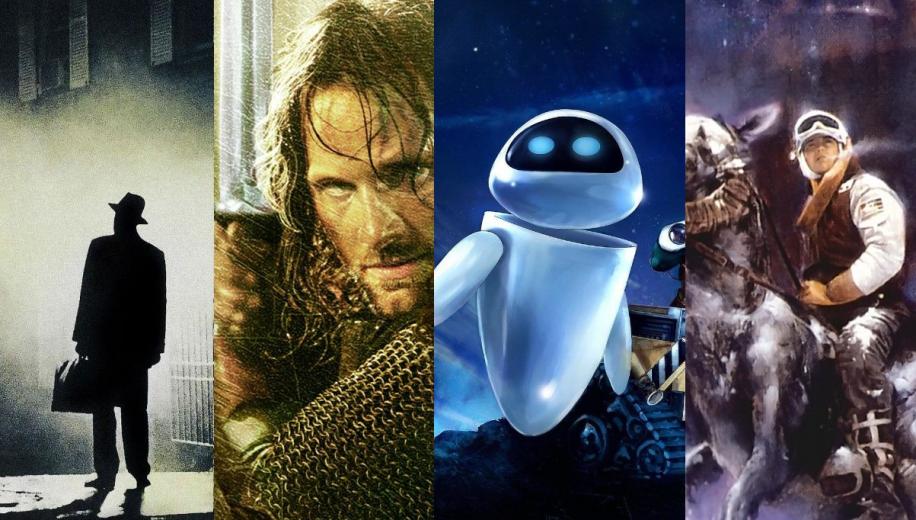 Welcome back, sir or madam, it’s the second part of the isolation-busting genre movie franchise list you’ve been waiting for. We’ve been curating an extra special list to continue looking at franchises for a stay-at-home movie-marathon. So, moving on from science fiction, spy action, and comedy (romantic or otherwise) in part 1 - we take a look at fantasy, space operas, superheroes, family and horror.

So, buckle in, and pay attention. Here we go.

Let me just start by addressing the giant statue of Pazuzu in the room; I am aware that this is pretty short as horror franchises go: a meagre five films. I just couldn’t bring myself to encourage anyone to sit through a Halloween marathon, or a Friday, or a Freddy or the last 17 Hellraiser movies. Horror is not short on long running franchises. What it is short on is sequels with new ideas that are not simply a series of repeated set pieces to bump off various gangs of teenagers. The Exorcist pentalogy (parallel tetralogy? Quadrilogy plus one?) may include one of the worst films Hollywood has ever produced but what these movies are not is unoriginal.

Starting with the seminal and infamous 1973 film, the series is less a set of sequels and more explorations of the world created by William Peter Blatty in both the eponymous book and an initially unconnected work, Legion. Considered by many to be the greatest horror movie of all time, The Exorcist made a name for itself through its depiction of the ordeal of a young girl possessed by a malevolent demon and through the de facto ban imposed on it by the BBFC’s refusal to grant it a home video certification.

The sequels include a John Boorman bomb, essential viewing for connoisseurs of audacious but terrible films, an adaptation by Blatty of one of his later works (the aforementioned Legion) and a weird duo of parallel prequels released within a year of each other. The prequel project was initially assigned to screenwriting legend and frequent Scorsese partner, Paul Schrader (Taxi Driver, First Reformed) and completely retooled by 1990s box-office-friendly hot property Renny Harlin (Die Hard 2, Cliffhanger). Both are worth watching.

Wild Card: The Devil and Father Amorth
Released 45 years after the Exorcist, a sort of passion project for director William Friedkin, who, though raised Jewish and agnostic at the time of directing the first film, has identified more with the Christian faith in his later years. This documentary film follows a ‘real life’ Exorcism in Italy. Not as interesting as it should be, sadly, but worth a watch.

A Pixar movie is an hour and forty minutes where four generations of a family can sit down, and every single member will find something to enjoy. The sheer breadth of incisive storytelling, with protagonists who range from children and teens to the very elderly, and the combination of moments of heart-breaking tragedy and absurd comedy is unmatched in Hollywood. And to make every single entry a likeable, watchable success? Wait, I forgot the Cars sequels existed again.

The really interesting thing about watching a Pixar marathon is that you’re going to be able to see the evolution of cutting-edge computer animation over the last 25 years. Okay, the look of Toy Story has dated somewhat and certainly by Toy Story 4 Buzz and Woody are looking a lot more textured, a lot more fluid in their movement, but it’s not hideous. With the exception of next-door neighbour Sid and his dog, it still looks pretty good. There are certainly movies from 10 years later that have aged 10 times worse.

Wild Card: A Bug’s Life / Antz double bill
Developed in tandem, Dreamworks’ bug-based first foray into computer animated feature films, Antz, caused a critical divide regarding which was the best insect-based CGI animation of 1998. For my money, it’s Antz by a small margin.

Best watched in story order, rather than release order, for the simple reason that there is no way you’ll want to keep going with the disappointing Hobbit movies after the triumphant and (generally) satisfying ending of The Lord of the Rings.

The LotR trilogy itself is one of the finest things ever put on screen and is due a touch-up and a 4K release ASAP (reportedly one is in the works, though details are spotty). There are few stories told as compellingly as the fate of the fellowship and everyone involved at all stages of production clearly poured nothing but devotion into its creation.

The production of The Hobbit, however, was famously rocky, with Guillermo Del Toro stepping down; Peter Jackson deciding upon a previously unplanned third film; shooting on the second two films consisting of a lot of all-purpose reaction and running shots and being sent to post-production with huge gaps in the story-board, handwaved away to be completed by crunched effects teams. The final touches were placed on Battle of the Five Armies mere days before general release and it shows. The team then spent a further year on the production in anticipation of the ‘extended’ cut, though perhaps it should have been renamed the ‘actually finished now’ cut. The shining light in this trilogy is the first half of The Desolation of Smaug which actually feels like someone read the book and attempted to recreate it for the screen so…enjoy that bit, I guess? I should be fair to the films: there’s definitely a fantastic 2-and-a-half-hour movie hidden somewhere in these nine and a half hours of film.

If you can stomach it, you should have a good slog through the special features of all six. In some cases, they’re more interesting than the movies themselves.

Wild Card: The Lord of the Rings (1978)
﻿Ralph Bakshi’s animated feature covers the events of the first two books of the trilogy and, while undeniably flawed, has a certain charm about it. It attempts to be faithful to the poetic spirit of the books including more of Tolkien’s songs. The film also includes some really effective use of rotoscoping to give the orcs a truly menacing dissonance with the rest of the film.

Before the MCU was the behemoth it is today, the characters spent a long time in the wilderness. For a long time, Marvel had been licensing out its characters for peanuts to studios for failed pilots and TV movies but with the reincorporation of Marvel Entertainment and shrewd businessmen Ike Perlmutter and Avi Arad’s tighter grip on the reins, in the late ‘90s that started to change.

1998’s Blade was an unassuming harbinger of the resurgence of Marvel superheroes in popular culture, with X Men truly ushering in the new age of comic book blockbusters two years later. In the years that followed, another 15 movies were developed and released by a variety of studios looking to jump on the bandwagon. Let’s generously say they had mixed success.

In the time between Blade and 2008’s Iron Man we saw absolute home-run and superhero movie benchmark Spider-Man 2 as well as absolute own-goal and superhero bilge Elektra. But in the mix too is Ang Lee’s cerebral and yet somehow massively stupid take on the Hulk, and the true casting perfection of Patrick Stewart and Ian McKellen as Charles Xavier and Magneto in the X-Men movies.

If you’re going to undertake this marathon, you will be doing it for a pre-existing love of superheroes. Of the 17 films you might sit through, a good two thirds are outright bad. Boy are they ever bad.

Wild Card: Punisher: War Zone
﻿Released at the tail end of 2008 and so only just qualifying for a place in this category, War Zone is one of the most bonkers superhero movies you will ever see. It is also likely to be the most graphically violent Marvel movie ever made. With a Rotten Tomatoes score of 29%, this movie has been unfairly maligned. I put it to you that it’s pure genius.

(I’m sure that extra 0.3 on my score comes solely from Punisher: War Zone)

The Star War was a small, relatively unknown film until professional Hollywood superfan JJ Abrams rescued it from obscurity with a new trilogy which kicked off in 2015. That trilogy has now come to a completely satisfactory conclusion and contains what is possibly the least controversial and most reasonably debated movie of all time, The Last Jedi. But did you ever wonder where Abrams got all his characters and plot ideas from? Well wonder no more and start at the beginning of what has now been retroactively named The Skywalker Saga.

As far as quality goes, we’re a bit all over the place and if you really want to watch them in a chronological timeline, you’re going to have a lot of nonsense to wade through before you get to the good stuff. To mitigate the effects of George Lucas’s brain mess, you might want to consider something known as the ‘Machete’ order (named for the internet citizen who first proposed it). It makes the prequels a little easier to swallow.

Number of Films: 11 (14 if you include animated film The Clone Wars and Ewok adventures Caravan of Courage and Battle for Endor – and if you’re not including them, are you really even a Star Wars fan?)

Wild Card: Empire of Dreams
A comprehensive and eye opening feature length ‘making of’ documentary which covers the original trilogy but focuses primarily on Star Wars, later re-titled A New Hope. There is plenty in here to delight even the most casual Star Wars fan.

So there you have it. Something for everyone.

In an alternative universe I might have gone on a bit about the Fast and Furious movies, Jason Bourne or the output of Studio Ghibli. But I didn’t. And we’re stuck in this, the darkest timeline. Sorry about that.

Anyway, I’m off to sit in my empty bathtub and rock gently back and forth with my bag of strong plain flour watching The Parent Trap (1998) on repeat.

Movies leaving the BBC iPlayer by the end of July 2020