Please read this article from at least 2 metres away. 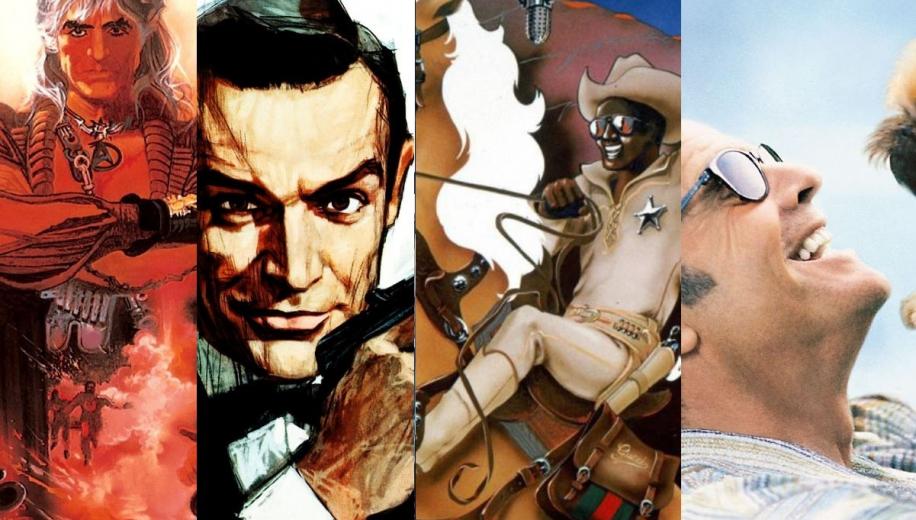 It’s the most wonderful time of the year. Huddled up warm by the fireside, watching the cold wind blow outside your window, clutching a bag of strong, plain flour which you’re convinced you can use to make pasta even though you’ve never before made pasta in your life. Yes, it’s self-isolation season and we’re all in need of a bit of good cheer.

If, during the gloom, you manage to tear yourself away from watching The Parent Trap (1998) on repeat on your newly minted Disney+ account, you might be looking for other avenues of entertainment. Well look no further and take me by the hand – make that, bump elbows with me – as I guide you through a smorgasbord of genre film franchises to keep you going through your isolation blues.

If you’ve never watched an episode in your life…this marathon will be a terrible introduction to why people love Star Trek. If, however, you already love Star Trek…again, this might make you question why. The batting average here is worse than Star Wars. But, like Star Wars, there is also a strong trilogy spanning six years at its core in the form of The Wrath of Khan, The Search for Spock and The Voyage Home.

‘Trek did an interesting thing in the seventies, pushing towards hard science fiction – the ‘twist’ at the end of the first movie and the preceding build up is reminiscent of 2001: A Space Odyssey. But, with the advent of the eighties, the films became more action-adventure focused and only became more so as time went on.

What the Star Trek movies do differently to most other science fiction franchises, and to their great credit, is that they allow their characters to age. They grapple with fading youth, legacy and relevance, even into The Next Generation era.

That is until a certain JJ Abrams got control of the property and that philosophical angle was dropped in favour of having a sexy Spock and Uhura bf/gf situation. Awesome.

There is a very lengthy argument to be made about the relative merits of each individual movie, but suffice to say, the general quality is actually pretty good, even if it’s not necessarily going to endear itself to the layperson. The films range from self-serious artiness, to goofy humour, to dumbfounding stupidity, to genuine excitement (I’ll let you decide which are which) and I guarantee you’ll enjoy at least one of them.

Wild Card: Galaxy Quest
Not strictly speaking a canonical entry, but widely accepted by fans. At one convention it was voted the 7th best Star Trek movie and that sounds about right to me!

The best way to watch James Bond is also the best way to count in a game of hide and seek: 1, 2, miss a few, Timothy Dalton, Casino Royale. That’s how I used to count anyway. Which might explain why every time I opened my eyes the other children were off doing something else.
My traumatic, lonely childhood aside, it’s fair to say that those first few Bonds cemented in people’s minds that Sean Connery is 007. Whether or not he’s your personal preference, he is the man who made the role iconic and the actor against whom all other Bonds are judged. His films were the most committed to the pure spy thriller genre and benefit greatly from it.

Bond movies have gone through stages of being camp ‘fun’, action focused thrill rides, gritty espionage dramas and back again to varying levels of success. In the line-up are some of the most memorable action sequences in cinema history and over its lifespan it has developed its own iconography. The trick Aston Martin, the kill-quip, a laser anything: all of them have become shorthand for Bond himself.

Sadly, a huge chunk of the Bond movies are less than perfect but, several decades later, the cinema-going public are still enraptured by the character, suggesting that, whatever you think of the individual entries into the Bond canon, there is something in these films that taps into the fundamental appeal of the heroism of one man in service of his country.

Wild Card: Casino Royale (1967)
It’s difficult to recommend this movie as the humour is stale, the script is dull and even Peter Sellers struggles to make an impression. Nevertheless, it remains an interesting curio.

Mission: Impossible really did the impossible in surviving its second instalment. As audiences were introduced to Ethan Hunt (quality rubber human faces crafted since 1996) with a generally po-faced but fairly intelligent espionage thriller, Jon Woo’s motorcycle ballet sequel with a Limp Bizkit theme song came as a bit of a let-down. It was a pleasant surprise then when, after a six-year hiatus, Tom Cruise returned in a stand-out action sequel directed by…JJ Abrams again!? Can this guy not just make his own stuff up? Anyway, since then the movies have gone from strength to strength with a strong entry from Brad Bird and the continuing leadership of Chris McQuarrie.

If you opt for the Mission: Impossible marathon, you’re going to have a short but consistent overall experience. Of the six, there’s really only one duff film, and what you get from the third movie onwards is a reliably fun set of nail baiting set pieces with a likeable ensemble cast and an almost irrelevant plot. The only film in the series with any real sense of consequence is 2018’s Fallout but don’t let that put you off, it’s arguably one of the best action movies of the last 20 years.

Aside from all these factors, who doesn’t want to see Tom Cruise break his leg in the name of entertainment?

Wild Card: Mission: Impossible Strange that the progenitor of the series has what feels like its most restrained plot. The double, triple, quadruple fake-out toward the end of the film will either have you smiling or rolling your eyes.

Mel Brooks films are a breed of their own. His brand of intensely rapid-fire comedy is unmatched in terms of the sheer volume of jokes produced. Don’t find a gag funny? Don’t worry, another 6 will be along any second. With such a high volume of jokes, it was inevitable that Brooks would burn brightly and briefly and after incredible success with his early work including The Producers, Young Frankenstein and Blazing Saddles, his career began to waver with a waning hit rate ending with a string of box office bombs.

Coming in at a mere 17 hours for 11 movies, this is high efficiency movie consumption, and it’s going to be a marathon that starts out with some of the funniest comedies ever made but that ends with some of the least funny. For this reason, I recommend you go and make some dinner after Spaceballs (because boy, you’ll need a break after that) but leave the movies running. That way you can come back to Robin Hood: Men in Tights and round off with the abject horror and disappointment of Dracula: Dead and Loving It.

It has to be said that even in most of Brooks’ misfires, there will be one or two incredibly sharp moments of satire or absurdism or a mixture of the two that will give you a real kick proving that, even in his later career, he still had a wicked sense of humour.

Wild Card: The Twelve Chairs
Not really a typical Mel Brooks movie, his second film is an adaptation of a 1928 Russian novel of the same name and is much more plot reliant that his usual sketch-based scripts.

(Wow that critic score is really good considering a 1.1 for D:DALI!)

Okay, so this is going to be a long marathon for you, but you are going to get some incredible films in the run. The 1990s was a golden age for rom-coms and even the most stone-hearted cynic is forced to admit that there were some very high watermarks set by screenwriting and directing legends including Nora Ephron (a name now almost synonymous with the genre), James L Brooks, Frank Oz, Lawrence Kasdan, Richard Curtis; I’m not just going to list names any more.

Something about the 90s gave rise to some of the most enjoyable and original meet-cutes, with the advent of the internet playing a role more than once, and saw a literary renaissance as screenwriters turned to the likes of Shakespeare and Jane Austen for inspiration (10 Things I Hate About You and Clueless respectively). Importantly, it was also a decade which saw the development of the move into the mainstream for black romantic comedies, now a thriving sub-genre, with hits including Eddie Murphy vehicle Boomerang and How Stella Got Her Groove Back, both important for challenging the depiction of business success and gender roles for African-Americans on screen.

The decade was bookended by Richard Gere and Julia Roberts in Pretty Woman and Runaway Bride, but, for many, the definitive couple was Tom Hanks and Meg Ryan. With direction by the great Nora Ephron, I guess you could argue it’s more of a thruple.

Number of Films: You have 45 to choose from.

Overall running time: Many, many days

Average Score: Tommy D: This has come off the rails a bit. I’ve gone too big.

Let me regroup and join me again next time when we’ll be looking at Fantasy, Family, Comic book and Horror movies.

Oh, and my own personal choice.

Until then: see how many of these you can find on streaming services and try not to get distracted by reruns of The Simpsons on Disney+

An Uber-Fan's Appreciation of Escape from New York

What's new on UK streaming services for May 2022
Top Bottom