Intelligent Full HD, 8K and Ultra HD Blu-ray were all on show 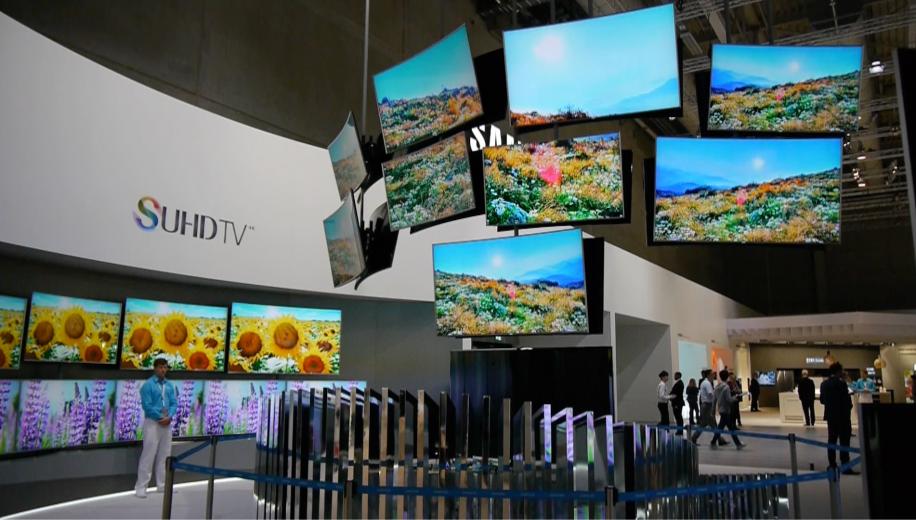 If there is one disadvantage to getting all your products out earlier in the year, it's that you don't have much new to show when IFA rolls around in September.
Whilst many of the manufacturers have seen their new products delayed for one reason or another, Samsung had most of theirs in the stores by April. In fact we've reviewed just about every major TV the company has released, as well as their soundbars and multiroom speakers. So rather than using IFA as a launch pad for delayed or new products, the Korean giant was primarily using the event as a technological show piece, demonstrating their latest features and giving attendees a glimpse of the future.

Of course the stand was dominated by Ultra HD TVs, many of which support the latest UHD standards and even more of which had curves. There was the flagship JS9500 model, as well as the other members of Samsung's curved SUHD range such as the JS9000 and JS8500. There also the curved JU7000 and flat JU6400 ranges which deliver equally as impressive performance but at more competitive prices. Samsung were also showing their curved soundbars, the HW-J8500 and its smaller brother the HW-J7500, as well as the non-curved HW-J650.

In another part of the stand Samsung were demonstrating their new 360 degree multiroom speakers, with both the R6 and the bigger R7 on display. We had our first chance to see the R7 on their tripod stands and their ceiling mounts, both of which looked very attractive. Which made the fact that they're currently unavailable in the UK all the more annoying. They also had a pair of R7s being used with a soundbar as wireless rear speakers and the new R1 360 degree speaker was also being shown for the first time.

Samsung have been ahead of the game this year with a full range of Ultra HD TVs that already include 10-bit, HDR and wider colour gamuts.

In terms of their technological showpieces, Samsung naturally had a section of their stand extolling the virtues of the curve compared to flat TVs. They also had other sections demonstrating the High Dynamic Range (HDR) capabilities of their TVs, as well as the wider colour gamuts of their Nano Crystal technology. There was a section explaining the goals of the Ultra HD Alliance, of which Samsung is a founder member and another giving us a glimpse of the future with an 8K or, as Samsung called it, '4X UHD' TV. Since Ultra HD includes both 4K and 8K resolutions, to call an 8K TV '4X UHD' is a bit misleading but given IFA is open to the public it's probably the easiest way to describe the technology and undoubtedly most people's only chance to see it.

There was also a section showing what Samsung have called Intelligent UHD, a new feature designed to be used with high definition streaming services. The concept recognises that a lot of people don't have fast enough broadband to enjoy Ultra HD streaming. What Samsung have done is to take a high definition stream and add metadata to help improve the quality of the image. The idea is to create a 6Mbps high definition stream that includes additional information for contrast ratio, colour space, noise reduction and motion handling. When the metadata is read by your UHD TV, the image is adjusted accordingly, allowing consumers to get more from their new Ultra HD TV, even if they can't actually stream UHD content.

In a closed door demo Samsung were also keen to show off the virtues of the JS9500 when compared against an OLED from another manufacturer - you can guess who that might be. The JS9500 is certainly an impressive TV with a bright and uniform picture and a wider colour gamut than the OLED. In the demonstration the OLED was also clearly showing signs of darker edges and banding just above black, something that didn't affect the JS9500. However the OLED still wins in terms of absolute back levels; so which is the better choice, will really come down to your own personal preference.

Samsung also demonstrated how they feel their RGB Ultra HD panels deliver a better UHD experience than some cheaper brands that use RGBW Ultra HD panels. Samsung's logic is that the additional white sub-pixel reduces the cheaper panel's colour brightness by 25%, which makes sense. They also feel that this additional white sub-pixel can result in loss of detail and aliasing in the primary colours as well. Samsung were able to demonstrate this using test patterns, although its debatable whether anyone would actually notice on normal content. However this potential difference in UHD panel performance is one of the reasons for the founding of the Ultra HD Alliance, to create a set of standards and logos that will identify the exact capabilities of a UHD TV.
Despite a general lack of new products the Korean manufacturer almost stole the show with the announcement of their UHD Blu-ray player. However just when you thought that Samsung would have nothing really eye-catching to show at IFA 2015, they almost stole the show by beating both Panasonic and Sony with the announcement of the UBD-K8500 - the world's first Ultra HD Blu-ray player. Running up to IFA everyone had expected Panasonic to announce a player, especially as they had shown a prototype at CES back in January. That prototype was little more than an empty box and another empty box was on show at IFA, whilst Sony who developed Blu-ray and own a film studio, somehow managed to drop the ball yet again.

So it was left to Samsung to keep the hopes of home cinema fans alive with the UBD-K8500. Although perhaps it shouldn't be a surprise as those of a certain vintage will remember that Samsung were also the first to release a stand-alone Blu-ray player (the BD-P1000) way back in June 2006. The UBD-K8500 has a black finish and is very minimalist in its design, aside from a slight curve to the front panel - what is it with Samsung and curves? There's the disc tray on the left, a display in the middle, a USB port and some basic controls. At the rear is an HDMI 2.0a output, a LAN port, an optical digital output and a power connector.

The exact release date has yet to be announced but we expect to see the UBD-K8500 go on sale in the US after CES in January, whilst it's expected to hit UK stores in 'early spring'. There was no indication on price except to say that it 'won't be as expensive as you might think'. Of course a player with no discs is just a black box, so it was equally as pleasing to hear that Samsung have been working closely with Twentieth Century Fox, who will be releasing a wave of films on UHD Blu-ray to coincide with format's launch. These discs include new 4K transfers with HDR and going forward the studio also plans to release all of its new films in the format day and date with the Blu-ray version.

Since there was a time when an Ultra HD disc format was looking decidedly unlikely, it's safe to say that Samsung and Twentieth Century Fox made our IFA with their announcements and we can look forward to a big launch for the new disc format at CES in January.
To comment on what you've read here, click the Discussion tab and post a reply.
Article Discussion (3)