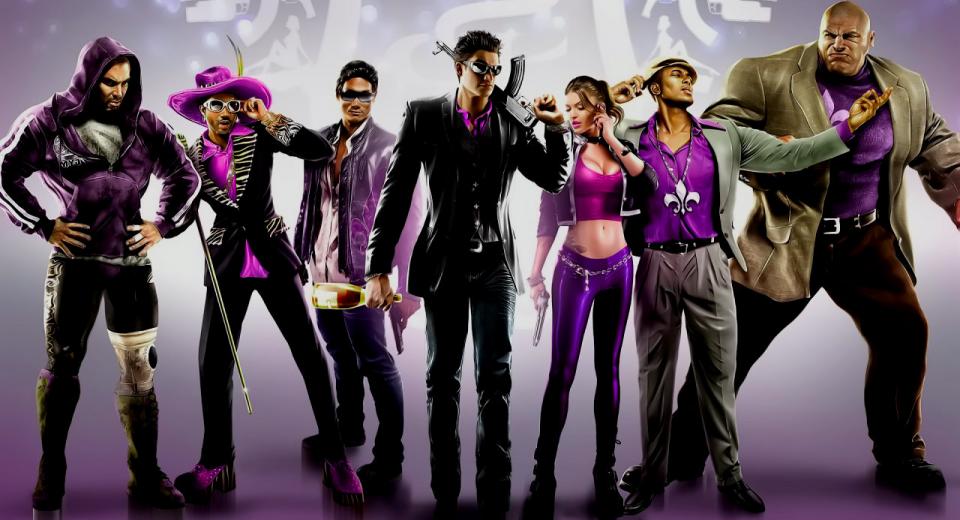 Saints Row is frequently discussed in terms of its relationship to open world conventions, many of which were established by Grand Theft Auto.
But that’s normal in any media; we accept conventions unthinkingly in everything we read, watch or play. The shadowy lighting of a horror movie, the inevitable capture of the killer in a murder/mystery novel, the happily ever after ending of a romcom.

In videogames, just like in film or literature, narrative conventions are rife. Tropes like the (rightly) maligned ‘damsel in distress’ are lazily thrown around, but this is understandable for a young medium whose focus has traditionally been on the interactive element rather than storytelling.

Because of that focus, control conventions are an absolute necessity. Players expect standardisation: right trigger to shoot, bottomost button to jump, left analogue stick to move. Imagine how confusing it would be if buttons had a different function in every game (or if imagining isn’t your thing, buy an OUYA and see for yourself.) EA understood this when they provided the Pro Evo control scheme as an option in FIFA, which might appear to be a minor detail but was in fact crucial in encouraging me and many others to desert Konami’s annual offering.

And then there’s the astounding array of gameplay conventions. Some are so firmly established they’re unlikely to ever disappear: You can guess what will happen when you fire at the red barrel in a shooter, when you drive over glowing chevrons in a racing game, or when you’re given a load of ammo and health before entering a big room in a Zelda title. Other tropes are more subtle, especially in puzzle games - like Portal 2’s use of light to guide players’ eyes to something important.
In videogames, just like in film or literature, narrative conventions are rife. Saints Row is a series designed from the bottom up with conventions in mind. In its first incarnation many people felt it was little more than a Grand Theft Auto clone. But all we really mean by ‘clone’ in gaming is that in many significant respects one game adheres to the conventions of another.

Taking the role of a gangland criminal, pressing the top face button to get in a vehicle, and driving round in an open world environment are just a few examples of narrative, control and gameplay conventions that Volition embraced with Saints Row.

For many, enjoyment of the Saints Row series has increased in correlation with how far it has deviated from the GTA template over the course of its four games. While the controls have remained rooted in convention (as you’d hope and expect), narrative and gameplay have veered to the absurd - Saints Row 2’s Sewage Cannon is not something to be forgotten in a hurry.

Personally, Saints Row: The Third was the first of the series that hooked me. Following on from the gritty GTA IV, you can imagine the top dogs at Volition sitting down and asking themselves how they could best differentiate their next release from Rockstar’s efforts.
What they latched onto was fun, and it worked.
What this meant in a practical sense was over-the-top weapons, cars that magically fixed themselves, the ability to parachute from a balcony window, insane shootouts while suspended from a helicopter and so on.

But almost all of this happened within the standard conventions of the ‘GTA clone’. Vehicles were the main form of transport, infinite ammo missions were used sparingly, and the wacky “fighting in space” mission was actually on a film set - a telling decision in retrospect. Steelport lacked Liberty City's character for sure, but you were still part of the city, forced to spend time on the streets with its inhabitants.

Saints Row IV strips all that away. The Steelport of the previous game is gone, replaced by a Matrix-like simulation. Fine: the narrative has changed, the colour palette has shifted slightly. On the surface, it's not a big deal. But the set-up is really just a vehicle to allow for the introduction of superpowers, which I feel is at the core of my issue with the game.

When I was younger, we had a Street Fighter 2 arcade machine in the local chip shop. At some point it was replaced with one that allowed you to do all kinds of crazy things like air fireballs, infinite dragon punches and so on. There were queues of people waiting to play… for about a week. But after that, the novelty began to wear off, and it left us craving the vanilla experience.

More recently (and perhaps more relevantly), I played GTA IV with mods that tweaked the game in physics-defying ways: frictionless roads, that kind of thing. Like that old SF2 arcade unit, it was great fun at first but my interest dwindled rapidly.

The new mechanics in Saints Row 4 felt more like that kind of mod. A companion for the core game, an amusing distraction. It’s not what should be at the core of a GTA / Saints Row sandbox experience.

Introducing the jump and sprint so early in the campaign entirely undermined the fundamental mechanic of the GTA-inspired sandbox – the auto in Grand Theft Auto. As a result, the sense of being part of the city is lost. Instead we’re left with a more standard superhero game, and one that doesn’t match its peers: an inferior inFamous. That’s not to criticise the whole experience – I still found it funny and fun, but for me SR4 is a genre apart from its predecessor.