Pushing the Envelope - Television innovation at the World Cup 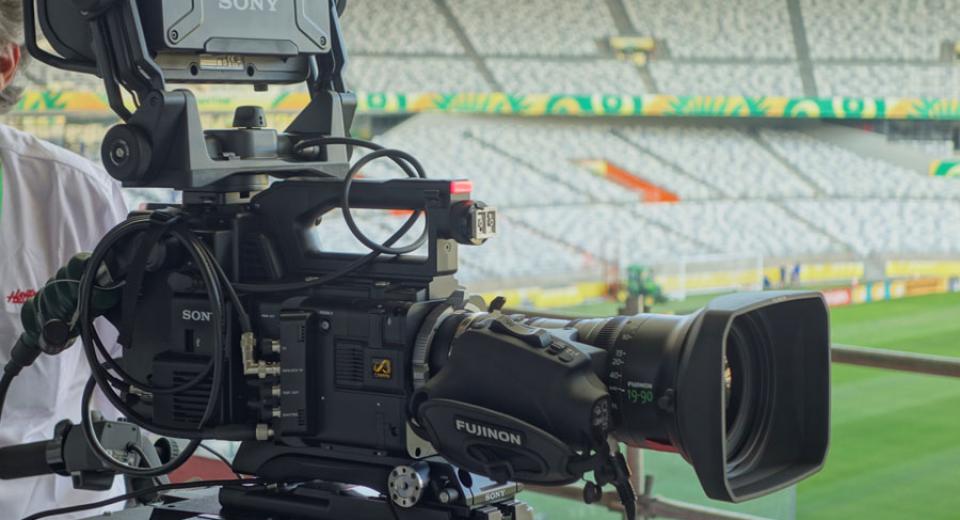 The FIFA World Cup has become the most widely viewed and followed sporting event in the world, eclipsing even the Olympics in terms of viewers and interest.

Football’s position as the ‘world’s favourite sport’ means that it’s showcase tournament pulls in staggering television viewing figures. The estimated cumulative audience for all the games at the 2006 World Cup in Germany was an incredible 26.29 billion people. The final that year was watched by 715 million individuals which, to put that into perspective, was 11% of the entire population of the planet. It’s no wonder then that, since the early days of television, the World Cup has been an important testing ground for new developments and established many broadcasting milestones.

The early tournaments were held in the days before television, so those games were either caught on film or lost forever. In fact before broadcast quality became good enough, FIFA captured many of the games on celluloid, releasing a film about each tournament afterwards. This is how many people would experience the World Cup in the days before worldwide television broadcasting. It’s ironic therefore that with advent of 4K, some of the games will be shown in cinemas in the new ultra high definition format and taking football full circle. As an aside, the BBC have been showing these FIFA films in the run-up to this year’s tournament and because they were shot on film, the quality is often surprising.
The 1954 World Cup in Switzerland was the first to be widely televised thanks to the new Eurovision network. The 1950 World Cup in Brazil was responsible for a series of ‘firsts’, it was the first since 1938, due to the Second World War, it was the first time the World Cup was referred to as the Jules Rimet Trophy, it was the first in which England participated and it was the first to have television cameras. However, given that the format was in its infancy, no one back in England was actually able to watch any of the games on television which was probably just as well. Despite being one of the favourites, England crashed out of the tournament in shock defeat to the USA - some things never change.

The first tournament where there was extensive television coverage was the 1954 World Cup in Switzerland and this was in part thanks to the creation of the Eurovision network. This was founded in 1954 by the European Broadcasting Union (EBU) for the purpose of international broadcasting cooperation and the World Cup that year was the perfect showcase. Another high profile event designed to encourage broadcasting cooperation amongst the members of the EBU (which includes Israel for some strange reason) was the Eurovision Song Contest, which started two years later. Thanks to the Eurovision Network the BBC, who had a monopoly at the time, were able to broadcast a number of the games live but sadly true to form, England went out in the quarter-finals.
There was a two-day delay for the 1962 World Cup but by '66 live football on TV was firmly established. The BBC’s monopoly was over by the time of the 1958 World Cup in Sweden, thanks to the launch of commercial television three years earlier. Now both the BBC and ITV would broadcast live games although, due to the technical limitations of the Eurovision network, only one match could be relayed at a time. That meant both broadcasters had to show the same games at the same time, giving viewers a choice of which broadcaster to watch as England crashed out in the early stages.

The 1962 World Cup was held in Chile but unfortunately Telstar, the first satellite capable of transmitting broadcasts across the Atlantic, wouldn’t be operational in time for the tournament. So there was no live television coverage and film footage was flown back and shown on a two-day delay. Because of this ITV wasn’t involved at all and the BBC only showed England’s matches and the final itself. In typical fashion, England went out in the quarter-finals, beaten by eventual winners Brazil.

By the 1966 World Cup football had come home and live televised football was already firmly established, meaning that there was full coverage of the finals in England by both the BBC and ITV. So everyone in the country, and a large part of the world, could all watch England finally win the World Cup on home soil. As enjoyable as these finals may have been, the coverage was still in black and white and it wasn’t until the 1970 World Cup in Mexico that the technology was in place to broadcast games live from across the Atlantic and in colour. Sadly despite the advances in technology, England failed to develop in the same way, losing to West Germany in the quarter-finals.

Incredibly the first World Cup to be recorded and transmitted in high def was Italia '90. For the next twenty years, television broadcast remained essentially the same and the less said about the 1970s the better with England failing to even qualify for the 1974 World Cup in West Germany and the 1978 World Cup in Argentina. It was left to Scotland to keep the flag flying for the Home Countries in those wilderness years and it wasn't until the 1982 World Cup in Spain that England managed to qualify again before going out in the group stages. The 1986 World Cup was broadcast from Mexico, allowing everyone but the referee to see Maradona punch the ball into the net as England exited in the quarter-finals again. At the BBC the cries of outrage could be heard in stereo as they were busy developing NICAM at the time, although it wouldn't be until the 1990 World Cup that live stereo broadcasts would be a reality.

The 1990 World Cup in Italy was a milestone for another reason, it was the first to be recorded and transmitted in high definition by the Italian broadcaster RAI in association with the Japanese broadcaster NHK. England managed to progress to the semi-finals for the first time since 1966 before losing in a penalty shoot-out with Germany. The 1994 World Cup was held in the United States, although since England again failed to quality the less said about that tournament the better. By the time the 1998 World Cup arrived in France, broadcasters were beginning to test digital broadcasting but it wasn't until the 2002 World Cup in Japan & South Korea that the event was fully broadcast digitally. At least England managed to qualify again, even if they did go out in the quarter-finals, losing to eventual winners Brazil.
By the 2006 World Cup the television landscape had changed completely and the entire event was "tapeless." When the 2006 World Cup kicked off in Germany, the television landscape had changed completely and now viewers from all over the world could watch every game live, broadcast digitally and in high definition. It became one of the most watched events in television history, no doubt in part because of advances in technology but also because of Europe's convenient position in terms of TV schedules. It wasn't just the picture that had improved, the audio had also progressed, going from mono to stereo to full surround sound. The 2006 tournament was also another milestone because it was the first completely "tapeless" finals and broadcasters could now access content whenever they liked from a central media server. Of course, England lost their quarter-final in a penalty shoot-out with Portugal.

Whilst the World Cup is often used as a test bed for television technology that will eventually be used at later tournaments and in broadcasting generally, the 2010 World Cup might be the exception. In the run-up to the finals in South Africa the broadcasts and manufacturers were convinced that 3D, which was enjoying another boom at the cinema, would be the next big thing. Certain games at the finals that year were captured in 3D and it was widely assumed that this year's tournament would be the first to be broadcast in three dimensions. It was not be, the popularity of 3D has waned since then and none of the games at this year's tournament will be broadcast in 3D. The only thing more disappointing than the popularity of 3D was the performance of England, who were given a drubbing by the Germans in their last sixteen match.
The 2010 World Cup in South Africa was the first, and probably last, to be shot in 3D.
The fate of 3D serves as a warning against pushing technology for the sake of it rather than using it to meet the needs of viewers and the broadcasters and manufacturers would do well to remember this at the 2014 World Cup in Brazil. This year FIFA's showcase event is being used as a test bed for 4K, with certain games being shot in 4K in a joint venture between FIFA TV and Sony and the BBC testing 4K broadcasts from Brazil. There's still a long way to go, the standards for 4K broadcasts haven't even been agreed yet, but with the growth in Ultra HD TV sales there's a good chance that 4K broadcasts from the 2018 finals in Russia will be a reality. In the meantime we can all watch this year's tournament in glorious high definition as England fail to deliver yet again on the world's biggest stage.
To comment on what you've read here, click the Discussion tab and post a reply.
Article Discussion (13)