The battle for suburbia grows to crazy new heights 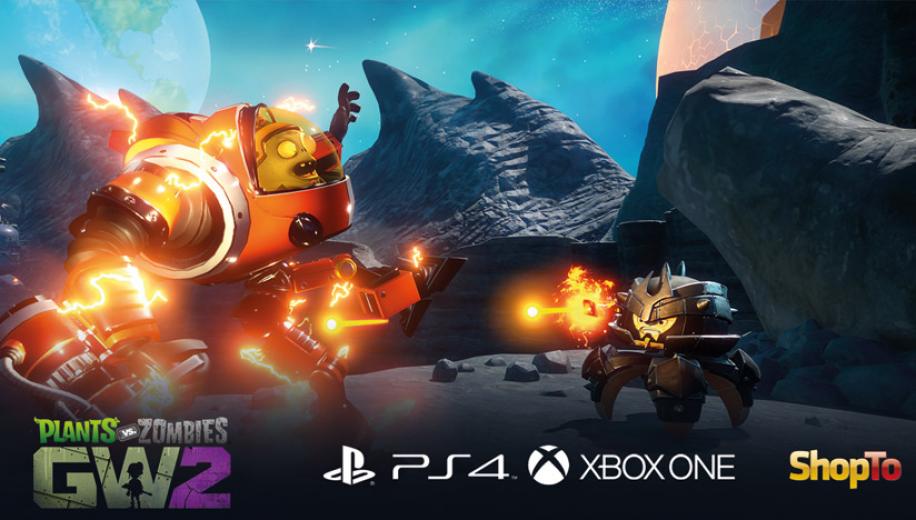 When originally released, Plants Vs Zombies came as a surprise success after it brought the charming mobile puzzle franchise created by Popcap Games and turned it into a rather fun and quite successful multiplayer shooter. The developer created a future generation of online shooter fans through the game’s easy to get to grips with and fun online multiplayer functions which appealed to players as young as seven years old. After finding success the first time around, Popcap and EA couldn’t stay still for the sequel, so it’s fair to say that they decided to go bigger and better this time around and while on occasion, this can be to the detriment of the simple nature of the first title, overall Plant’s vs. Zombies: Garden Warfare 2 is still a much improved game for these changes. First impressions First impressions left us unconvinced that we’d like Plants Vs Zombies 2 but our minds were changed three hours in as we realised we were hooked into the chaotic action that was taking place before our eyes. At first it’s all just a little bit confusing, thanks to the large hub known as the Backyard Battleground, which hosts both the home of the Plants and the Zombies. In this hub you are free to roam, finding secrets and battling against the Plants or Zombies for practice or if you like, completing many of the challenges or tasks which are assigned to you after a little investigation of the area. The Backyard Battleground is the hub for everything, whether you want to play Garden Ops, Multiplayer, buy stickers with the points you have earned or customise your characters. Ways to play – Game Modes The multiplayer is still one of the main draws, now offering a 12 vs.12 online experience with 12 new maps. Standard gameplay modes include the likes of Vanquish (Team Deathmatch) and Vanquish Confirmed (Kill Confirmed), while you also have other takes on standard multiplayer modes such as Gnome Bomb, where both teams find explosive gnomes and take them to the enemy base, protecting them until the blow; Suburbination, where you must take control of three points on the map and finally, Welcome Map, which is a simple mode to help ease you into the multiplayer side of things. Perhaps the biggest star of multiplayer is Turf Takeover, which encompasses Gardens & Graveyards and Herbal Assault from the first game in the series. If you’ve not heard of these modes, it basically boils down to one side being on the offensive while the other defends. Roles are also reversed at points too. The objective in Turf War is for the offensive team to attack five bases and complete a final objective at the sixth base to win. The defensive team obviously has to protect each area if it can. During multiplayer, no matter which character you choose, each has three abilities, all of which are subject to a cool down once used. Knowing when to use these abilities is part of mastering the game, especially in modes such as Turf Takeover, which is a much more tactical mode than most. Rose is the character that seems to stand above all others, as she moves faster and seems a lot more powerful than most; her ice version being even more powerful by freezing enemies and taking away their ability to defend themselves. We expect Popcap will fix this unbalance quickly just like DICE speedily solved the balance issues in Star Wars Battlefront. Other than this issue though, all the other characters seem to be able to hold their own and while some may feel easier to use than others, this will no doubt come down more to player preference rather than, Rose apart, one character being better than the others. The very confusing Time Park Map would be one issue we’d choose to highlight as we feel there is just too much going on in the background here, which can be quite distracting. In fact, there’s even time ports, which seems to spawn you in random areas and add even more confusion to matters. We are certain we’ll get used to this map the more we use it, but at the moment it does feel like more of a task than a joy to play. One of our favourite modes within the previous game was Garden Ops, and that’s pretty much true here too. Garden Ops is essentially the horde mode, in which you defend your garden from wave upon wave of zombies, with large boss enemies also making an appearance in between waves. Throughout you’ll have options to add the tower defence style weapons you’ve found in sticker packs to the plant pots spread around the level, giving you an extra layer of defence against the oncoming waves, which adds another layer of customisation and a different way to play each time. Garden Ops is such a fun mode and one you’ll no doubt spend a lot of time playing, especially with a friend in split-screen (an option which is available for every mode).

What keeps you hooked?

Experimenting with the many different characters in Plants Vs Zombies 2 is undoubtedly some of the most fun you’ll have in the game. Initially there are six character classes on each side, with some familiar faces such as the zombie scientist and the Zombie All Star. There are new characters too, such as Citron, a large plant who is based on the orange. Think of Citron like a futuristic riot policeman, as he sports both a riot shield and a rather impressive laser cannon amongst his special move arsenal, as well as the ability to go the full orange and roll around the battlefield. If you manage to unlock (or purchase) the correct stickers there are well over 30 characters for you to play around with.

Speaking of stickers, this is a part of the game which really opens things up in terms of customisation. Playing either in multiplayer or just messing around in the Backyard Battleground, you can earn enough coins to buy sticker packs, which in turn allows you to unlock new weapon skins, characters, costumes, abilities and more. There’s never a shortage of things to unlock, so you’ve always got something to aim for, which is a great incentive to keep playing. As previously mentioned, Plants vs Zombies: Garden Warfare 2 suffers from balance problems but we’re confident that alongside a growth in the community the developers will understand and promptly fix the issues. Once this happens it’d be hard not to recommend Plants Vs Zombies: Garden Warfare 2, because it’s such a fun game which is packed with enough incentives to keep everyone playing for a long time to come.

Plants vs Zombies: Garden Warfare 2 is a game that doesn’t take itself seriously and perhaps that’s the biggest appeal of all. Anyone playing won’t be able to help having fun and at the end of the day, that’s all you should really want to get out of a game...