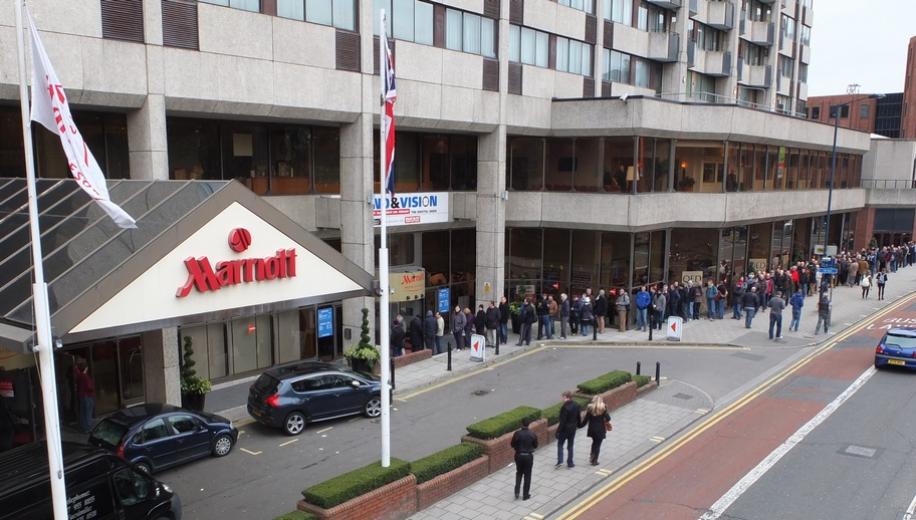 The 2018 Bristol Sound and Vision Show is just around the corner and it remains one of the UK’s biggest Hi-Fi and Home Cinema events.

There will be around 200 exhibitors attending, including virtually all the big names in Hi-Fi, with products ranging in value from £1 up to £50,000 for a set of very high-end headphones. The Show will also feature exclusive manufacturer discounts, a variety of competitions with the prize fund totalling more than £11,000 and, of course, the opportunity to speak with manufacturers directly.

Acoustic Energy are back at Bristol for the first time since a management buyout last April placed the company back into UK ownership. Having launched the 100 Series, AE1 Active and BT2 Wireless Bluetooth models at last year's show, this year they plan to launch the 300 Series. Building on the popularity of the 100 Series, the 300 Series uses bespoke new drive units, an aluminium dome tweeter (featuring our WDT Wide Dispersion Technology) and cabinet enclosures that boast an inert 18mm high density MDF material with proprietary internal bracing, as a result the 300 Series raises the performance bar further still.

ARCAM as part of Harman Luxury Audio will launch a brand new range of hi-fi components. The new ARCAM HDA range is their best performing and most flexible range of products ever, according to the manufacturer. The range includes the replacement A19 amplifier the SA10. Allied to this we they’ll be showcasing the Revel loudspeaker range and the Mark Levinson Audio products which they are now distributing in the UK. All these new products will be on demonstration in The Empire 2 suite.

Audio Technica will be on Stand Bristol 8 on the Ground Floor, where they will be demoing their newest headphone releases, with many making their UK or European debut at the show. The line-up includes the flagship reference open-back ATH-ADX5000, the wireless noise-cancelling ATH-ANC700BT and the ATH-DSR5BT in-ear Bluetooth aptX HD-enabled headphones. For analogue lovers, the AT-LP5 and AT-LP3 turntables will also be on show, alongside a comprehensive range of phono cartridges and styli to suit all levels.

Bowers & Wilkins will be in the Wallace Suite on the Lower Ground floor where they will be showcasing the new 700 Series 2 for the first, alongside Rotel’s new 15 Series electronics. Also on show will be the new DB subwoofers.

The Chord Company will have the world debut of a brand new product poised to transform its entire portfolio of loudspeaker cables. In addition, the company will also have demonstrations of its new Shawline streaming, power and headphone upgrade cables for those wanting to audition for themselves, the difference cabling can make.

The Wiltshire specialist will have two locations at the show: the familiar ground floor foyer spot and full system demonstrations in room 112 on the first floor.

The Japanese speaker specialist will be giving showgoers the chance to hear its flagship sound on the third floor, courtesy of its range-topping TD712zMK2 speakers and TD725SWMK2 subwoofer which will be on demonstration in the Decent Audio room/s.

The speakers, which showcase ECLIPSE's proprietary accurate waveform reproduction technologies, will be powered by Audio Analogue electronics and a high-end Kronos turntable.

Centre stage on KEF’s stand will be taken by its new LS50 Wireless speakers. Billed as a complete high-resolution streaming system, it has the addition of active power and wireless connectivity for convenient, audiophile quality hi-fi at the touch of a button. You can see KEF on the Lower Ground in the Concorde room.

The UK's only Welsh hi-fi manufacturer will have the world debut of several new products on the 10th floor, including two new music streamers, the new half-width Elements Streamer and the new full-width Stream IV streaming CD player.

High-end German brand, Loewe, will be showcasing its flagship home entertainment system, comprising the bild 7.55 OLED TV – together with Loewe’s new, wireless klang 5 floorstanding speakers and subwoofer. You've got to love those German names and lack of capitals, which is rather ironic when you consider all nouns have capitals in German.

Neat Acoustics are in Room 116 on the 1st Floor where they will be unveiling the Iota XPLORER speakers that use the same configuration as the (incredible) Neat Iota Alpha speaker but in an enlarged form with isobaric bass loading. The Xplorer's top section is sealed off from the lower section, and acts as a two-way infinite baffle loudspeaker. It houses Neat's own P1-R3 170mm bass / midrange drive unit alongside an Air Motion Transformer (AMT) tweeter in a horizontal array.

Optoma will be propping up the video end of the show with a demonstration of its new 4K UHD laser projector, the UHZ65. It will project onto a Grandview 4K fixed screen, fitted with the latest screen material technology and certified for 4K by the ISF. You’ll be able to see Optoma in Room 420 on the 4th Floor.

Pro-Ject's new all-in-one record player is set to exhibit in the UK for the first time at Bristol 2018. Juke Box E is a vinyl record player with integrated phono stage, a Bluetooth receiver, a pre-amplifier and a power amplifier all in one compact chassis, requiring only a set of speakers to make a complete hi-fi system.

Q Acoustics will be in the Empire 3 Suite on the Ground Floor where they will be showing their range of audio products including, we hope, the mesmeric Concept 500 Speakers which took the company in to a new (high-end) sector of the market.

Roksan has always been associated with high-end hi-fi. The iconic Xerxes turntable was their first product, and since then a full range of quality turntables and electronics have been released from their UK-based headquarters and manufacturing plant. At Bristol 2018, they will have some new products to show, including the latest developments in the Kandy K3 range and the new Oxygene 30 turntable.

Sony is one of the really big names in the industry and they’ll be there to showcase their 'Sound Entertainment Solution for All' concept. Included on the stand will be the UBP-X800 UHD Blu-ray Player, the HT-ST5000 soundbar and STR-DN1080 AV Receiver. Sony will be in Room 314 on the 3rd Floor.

We’re sure that the Technics exhibition will be very popular, indeed. You can join them in the Cabot Suite (Lower Ground Floor) , where you will get the first chance to see the new edition SP-10R & SL-1000R direct drive Reference Class turntables in the UK. They will put the SL-1000R put through its paces using their Hi-Fi separates and speakers. They will also have their popular 12” record bags with them too, which always come in handy.