Impressive mid-range LCD TVs with the FX750 the stand-out 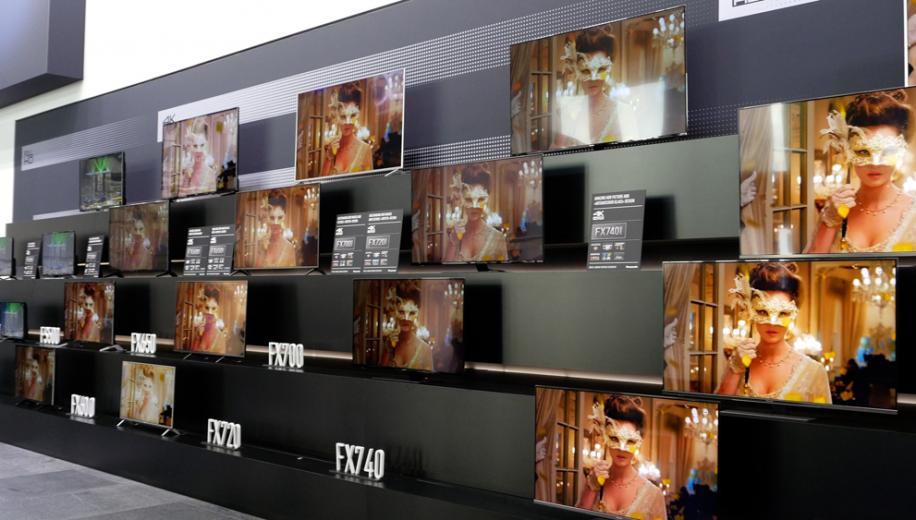 Panasonic celebrated their 100th anniversary with a larger than normal European Convention held in Mallorca.
Along with a presentation that celebrated the life and philosophy of the company’s founder Konosuke Matsushita and a gala dinner, the company also found time to launch their 2018 TV line-up. However this year the TV range wasn’t a complete surprise with Panasonic's new OLEDs having already been announced at their LA launch event just before CES.

So at the convention the emphasis was very much on the new LED LCD line-up for 2018, with Panasonic clearly taking the view that OLED is now the technology of choice for enthusiasts, whilst the mid-range models are aimed at a more general audience. This certainly makes sense and if you really want deep blacks, wider viewing angles and a superior contrast performance then you should be looking at Panasonic's new FZ802, FX952 or last year's EZ1002.

The simple fact is that to deliver an LCD TV that can even begin to compete with an OLED in areas like black levels and contrast performance, then you really need a VA panel, and a direct LED backlight with hundreds, if not thousands, of local dimming zones. Aside from a VA panel limiting the optimal viewing angle, the use of a direct LED backlight with thousands of independent dimming zones is inherently expensive, making such a TV cost just as much as an OLED. In addition the use of a direct backlight results in a deeper chassis at a time when mass market consumers, who have seen OLED TVs in the stores, want cheaper LCD models that are equally as slimline.

The solution to this problem is to use an IPS panel, this sacrifices black levels in favour of wider viewing angles but that's a compromise the average consumer is happy to make. The IPS nature of Pansonic's 2018 LCD TVs and the new screen sizes would suggest that they are sourcing their LCD panels from LG this year, although they wouldn't confirm either way. The use of edge LED backlighting also solves any chassis depth issues and whilst it might not be the ideal approach for HDR, the lower peak brightness of these TVs should minimise any unwanted artefacts like haloing. The result is a TV with a pleasing picture, wider viewing angles and an ultra-slim chassis, thus giving consumers some of the benefits of an OLED TV but at a much lower price point.

Aside from the aspects already mentioned, Panasonic will include HDR10+ on all their 4K HDR TVs, bringing the benefits of dynamic metadata to their entire line-up. This is important because the less capable a display in terms of peak brightness, the greater value added by the inclusion of HDR10+ support. Another key feature for Panasonic is their Local Dimming technology that combines zone lighting controls and image processing to create hundreds or, in the case of the Pro version, thousands of effective zones. This minimises haloing and improves the contrast performance of an edge-lit LED LCD TV. We saw demonstrations of both HDR10+ and Local Dimming Pro at the convention and the results were impressive. The HDR10+ footage clearly had more detail in the highlights than the same footage being shown using HDR10 with static metadata. Whilst the Local Dimming demo was also very impressive with the Pro version from this year reducing blooming and retaining better gradations when compared to last year's local dimming processing. The flagship LCD TV for 2018 is the FX750 (which is the FX780 in Europe) and, based on our initial impressions at the convention, this has real potential. If Panasonic can price this model competitively then it could prove to be a big seller in the mid-range bracket. The first thing that catches your eye when you look at the FX750 is the 'Art & Interior' all-glass frame which, whilst reminiscent of LG's 'Picture-on-Glass' design, makes it the best-looking Panasonic TV we have seen in ages. There's a nice silver trim and the traditional shape of the premium dark bushed metal stand is sure to please those who don't have an especially wide surface on which to install their new TV. The combination of the all-glass design and edge LED backlighting means that the FX750 is also extremely slim, resulting in the kind of size zero dimensions one normally associates with an OLED TV. There is also the option for tidy cable management at the rear, which means that the FX750 looks good from any angle.

On the specifications side of things the FX750 is certainly well equipped, sporting what Panasonic refer to as a 'Super Bright' 4K Ultra HD 100Hz 10-bit IPS LCD panel that uses edge LED backlighting. There's a quad core processor and Panasonic's Studio Colour HCX Processor, along with support for High Dynamic Range (HDR10, HDR10+ and Hybrid Log-Gamma) as well as Wide Colour Gamut and a peak brightness of around 600nits. Other useful features include My Home Screen 3.0, dual tuners, 4K streaming services, HDMI 2.0, HEVC support and HDCP 2.2 compatibility.

The FX750 boasts a 20% increase in brightness on last year and also has the same Hollywood Cinema Experience (HCX) processor with 3D look-up tables (LUTs) used on Panasonic's 2018 OLED TVs, resulting in an improved level of white balance and colour gamut accuracy. The 4K HDR Pro Cinema Display uses an IPS panel that provides both a wider viewing angle and Wide Colour Spectrum support. There's also Local Dimming Pro and a 2200Hz refresh rate that promises to takes judder in its stride, eliminating blur from fast-moving scenes so that sports and action movies are displayed with ultimate clarity and smoothness. Panasonic also claim to have kept the low input lag of 18ms that was seen last year, making the FX750 a great choice for gamers. The FX750 is comprised of the TX-75FX750B, the TX-65FX750B, the TX-55FX750B and the TX-49FX750B, with all screen sizes available in April. The next model down is the FX740 and this also uses Panasonic's 'Art & Interior' all-glass design resulting in a sleek and stylish appearance that is ultra-slim and looks great from any angle thanks to effective cable management. The FX740 also uses a metallic finish and a similar metal stand to the FX750 and the result is a TV that is well made and feels like a premium product. The FX740 uses an IPS LCD panel with edge LED backlighting and supports both wider colour gamuts and high dynamic range (HDR10, HDR10+ and HLG). There's also Local Dimming and a 1600Hz refresh rate that promises better contrast and motion handling. Other features include My Home Screen 3.0, 4K streaming services, HDMI 2.0, HEVC support and HDCP 2.2 compatibility. The FX740 is exclusive to Currys/PC World and is comprised of the TX65FX740B, the TX-55FX740B and the TX-49FX740B, with all screen sizes available in May. The FX700 uses the flexible 'Switch' design which Panasonic introduced two years ago and allows you to choose between two different stand configurations. You can either have the feet towards the edges of the panel or towards the middle, thus changing the footprint depending on the size of the surface on which you want to position the TV. There's an attractive metallic trim and a brushed meta finish to the feet but in most other respects the FX700 is similar to the FX740 with an IPS LCD panel with edge LED backlighting and support for wider colour gamuts and high dynamic range (HDR10, HDR10+ and HLG). There's also Local Dimming and a 1600Hz refresh rate for improved contrast and motion handling, whilst other features include My Home Screen 3.0, 4K streaming services, HDMI 2.0, HEVC support and HDCP 2.2 compatibility. The FX700 is comprised of the TX-65FX700B, the TX-55FX700B and the TX-49FX700B, with all screen sizes available in April. Finally there is the FX600, this also uses the 'Switch' design, allowing you to choose between having the feet at the edges or the centre of the panel, thus changing the size of the footprint. However the cheaper FX600 uses a more plastic construction compared to the FX700 and is finished in black. The FX600 uses an IPS LCD panel with edge LED backlighting and includes support for wider colour gamuts and high dynamic range (HDR10, HDR10+ and HLG). There's also Adaptive Backlight Dimming Plus and a 1300Hz refresh rate, whilst other features include My Home Screen 3.0, 4K streaming services, HDMI 2.0, HEVC support and HDCP 2.2 compatibility. The FX600 is comprised of the TX-65XF600B, the TX-55FX600B, the TX-49FX600B and the TX-43FX600B, with all screen sizes available in April.

What is Micro LED?

What is 8K TV? Everything You Need to Know.

VIDEO: Hisense launch new QLED TVs for the UK, but NO ULED XD!