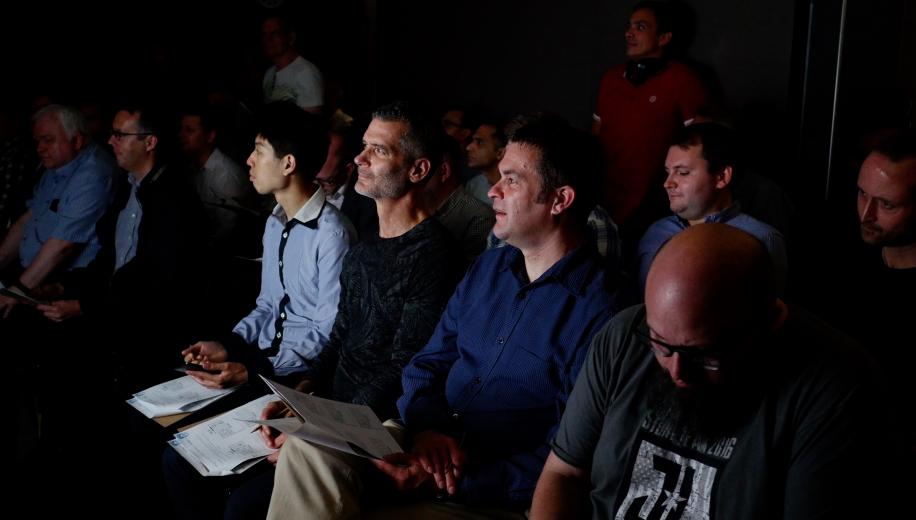 If there's one question that we get asked a lot these days it's which TV technology is better – OLED or QLED?
It's a simple question but a complicated answer, with each 4K technology possessing different strengths and weaknesses when it comes to SDR (Standard Dynamic Range) and HDR (High Dynamic Range) content. However with both OLED (Organic LED) and QLED (Quantum Dot LED LCD) gaining a lot of publicity recently, there has never been a better time to compare the two Ultra HD TV technologies. So Philips, who actually offer both technologies within their TV line-up, decided to hold a blind shoot-out between OLED and QLED and who better to participate than AVForums members and readers.

Philips felt that as TV enthusiasts, AVForums members and readers would be better informed and more critical than the average consumer, thus adding greater weight to their conclusions. So there was a general invite to all AVForums members, with the numbers limited to thirty people due to the size of the venue. In the end there was a full house for the event with all thirty AVForums members giving up their time for free in order to take part in the shoot-out.

MORE: What is an OLED TV?

MORE: What's the difference between a QLED and an OLED TV? The event was held at BAFTA (British Academy of Film and Television Arts) in central London and Philips used the Sir Run Run Shaw screening room as the venue for the actual shoot-out. This screening room provided the amount of light control necessary to replicate both day and night time viewing conditions. Philips also went to great lengths to ensure that the test was completely fair and unbiased. The two TVs used in the shoot-out were the Philips 55POS9002 OLED TV and the Samsung QE55Q7F QLED TV, both of which have the same 55-inch screen size. They also had the same original retail price of £2,299 and were bought brand new from retailers, being delivered unopened on the day, so there were no pre-production or 'golden' samples used.

The two TVs were setup with their bezels and stands covered so that all you could see were the screens and they were simply marked Set A and Set B. AVForums was on hand to setup and calibrate each of the TVs in their respective Movie picture modes, ensuring that they were hitting D65 and Rec.709 correctly and also that they had similar levels of brightness (luminance). We ensured that all image processing was turned off, aside from some minor motion enhancement that was deliberately left on so that the motion handling of both TVs could be evaluated without introducing frame interpolation. The TVs were also optimised for HDR, ensuring that they were performing to their best of their respective abilities and making sure that the SDR and HDR comparisons were completely fair.

MORE: What does TV calibration involve? Due to the layout of the room, the shoot-out had to be conducted with the seating facing the side wall, which meant that the angles of viewing were wider than Philips would have wanted. However, to make the shoot-out as fair as possible and negate the impact of viewing angles, after the first run-through the attendees were asked to swap their seating positions from one side to the other and the clips were run for a second time. Those attendees at the back during the first run-through were also moved to the front for the second, thus ensuring everyone had a chance to see the footage clearly and to experience each technology under the best possible conditions because, unlike OLED, QLED is very dependent on viewing angles for optimal performance.


Philips Director of Product Strategy & Planning Danny Tack, who is an expert on picture quality and something of a legend in the TV industry, was on hand to oversee the actual shoot-out. Danny ran through nine different clips before everyone swapped sides and then he ran through them all again. The clips all ran for about 2.5 minutes and included various specially created SDR sequences designed to emphasise contrast, colour, motion and brightness, along with some NASA HDR footage. Danny also used a Samsung UBD-K8500 Ultra HD Blu-ray player to show a scene from the 4K Blu-ray of Passengers and two scenes from the 4K Blu-ray of Planet Earth II. There were thirty AVForums members at the event, which is a large enough sample size to ensure meaningful statistics. All the attendees were given scoring sheets and asked to score Set A and Set B on contrast, motion, sharpness and colour. Once the shoot-out was complete the sheets were collected and the scores collated to find a winner.
In the end it was all about the contrast and black levels, with the OLED clearly superior The results certainly coincide with our own experiences from testing both technologies in reviews, although at present we haven't actually reviewed either of the sets used in the shoot-out. Unsurprisingly it was black level and contrast where the OLED had a clear advantage and despite Philips's efforts to disguise the two sets, everyone could tell which was the OLED as soon as they walked into the room. The Samsung Q7 is edge-lit, with the LEDs positioned along the bottom, so it was always going to struggle with certain dark scenes. A nighttime shot of hyenas from Planet Earth II showed the animals in sharp focus against a black background and with their eyes glowing. This looked superb on the OLED but was dark grey on the QLED, although the closer you sat to centre the better the performance of the Q7.

An HDR shot of the sun against the blackness of space also caused the QLED to struggle with the sun being suspended in a column of light due to the position of the LEDs. Having said that the poor blacks of the QLED were offset by an increased peak brightness, especially with HDR content. In fact in the same NASA HDR footage as the images of the sun, there were also shots of the moon and there was definitely more detail in the brightly lit craters on the QLED, with OLED clipping slightly. In many other respects it was also much closer, with both TVs delivering a solid colour performance, a sharp image and good motion handling with frame interpolation engaged. The OLED still had the edge in most, as evidenced by the scores, but from an optimal viewing position the QLED was able to deliver a nice image, although in the end it was the black levels and contrast ratios that made all the difference.


Commenting on the shoot-out, Danny said: "We went out of our way to be as fair as possible with the test but there was still a very clear outcome. I think everybody agreed on the night that the QLED set was an excellent TV but the OLED was distinctly better in all measured categories. This is how we will distinguish the technologies in our own range". Danny also spent time answering questions from the AVForums members in attendance covering everything from the strengths and weaknesses of OLED and QLED, to future TV developments, picture processing and Ambilight. Danny was, as always, very open and honest, answering some fairly tough questions from those in attendance. In fact afterwards he said that despite regularly holding technical demonstrations for professional technology journalists for years, the AVForums membership was one of the most knowledgeable audiences he had ever encountered.

As always it was a pleasure to meet the AVForums members who were in attendance and overall it was a very enjoyable and enlightening evening. The venue itself was lovely and Philips had laid on a free bar which is always appreciated. As announced before the event, Philips also gave the winning TV to one lucky attendee and it was Grant Evans (AVForums member Dollag) whose name came out the hat. So congratulations to Grant, we're sure he'll be very pleased with his new Philips 55POS9002 4K OLED TV.