When will the monotony be broken? 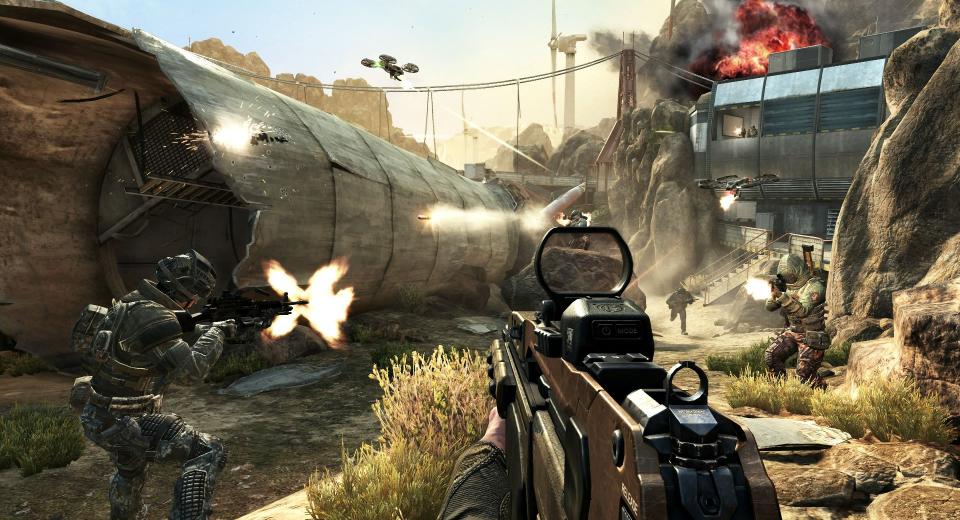 I’ve had some time to reflect recently. Going on holiday for two weeks allowed me to ponder the current state of affairs within the games industry. Being totally honest, it gave me some needed time away from the monotony we currently find ourselves in. Maybe it’s the quiet before the storm, but we’ve been waiting a while now for said storm to hit, or even start brewing. My recent purchase of a Wii U has allowed me to catch up with the latest adventures of Mario and friends but even then there is still a hole in my collection. It’s a multiplayer sized one, and it’s been there for some time. Being away from home with no consoles, or even a PC, left me turning to my mobile to fulfil my time to game, albeit casually. After a flick through the Play Store I stumbled on Candy Crush and Family Guy: The Quest For Stuff, both of which I had played previously. Both of which I had deleted to rid myself of my addiction and stop my blood pressure rocketing each time I got nowhere repeatedly.

Now this seems like a strange way to start an article, talking about my holiday and my mobile gaming habit, but my time away from console/PC gaming made me realise something; there’s little reward in gaming anymore. Games like Candy Crush tap into the reward/return loop system, subjecting you to repeated failure before exposing you to success. The result of which is you returning every single time, no matter how times it takes to pass that level you were stuck on before.

Recently, multiplayer experiences have been missing this, and despite many attempts they still cannot seem to get it right. The same rinse & repeat formulas and processes are wheeled out each year, with little/no innovation to be found. A recent trend that has appeared is that of DLC and season passes to get us excited, adding new maps or modes to the overall experience (which will be paid for content). Even with this additional content potentially adding more variety, there’s no reward, no excitement and no reason to return. After stewing this one over for a while, I started to get an itch. Not physical, but mental. An itch to play a game that had rewarded me for my loyalty and commitment to succeed, no matter how many times I overcame adversity. It was for Destiny.

Now we all know that Destiny wasn’t what we all thought it would be, and lacked a great deal of variety and adventure that we were all promised in its build up. Recently however, it was revealed that Bungie had poured a huge amount of time and effort into finding out our gaming habits, what we like and what we don’t and, more importantly, what makes us come back for more.

We all complained at how progress was slow and how it was unfair that so-and-so got a better piece of equipment, but I think the issue with it was the predictability of it all. Its design was too transparent and the game was given up far too early with little avenue for discovery. The mystery of each mission was taken away and the reward cycle was broken; there was no reason for many to continue when they knew the outcome. Other common tools are used to build reward cycles which are important in order to keep gamers engaged with the experience. Levelling up to a new rank, unlocking new weapons and access to new content all contribute to an overriding sense of worth, and a reason to keep returning. What is also missing from many titles out there at present is teamwork, which was also a huge part of what made Destiny successful. Bungie pushed you to work together, be it with friends or random players, to take on missions and work together, thus rewarding you for doing so. Yet again contributing to the reward/return loop which many experiences simply aren’t offering, and it’s something that needs to be addressed.

I often feel isolated online, with no reason to integrate with players who I know and particularly those who I don’t, which is a criminal error to be making. It all boils down to the fact there is no reward for doing so, leaving many to fly solo the majority of the time. It’s hard to find time to gather friends round regularly on a week night to game, but why aren’t we being rewarded for working together with those who we don’t know and making new friends and allies? Give gamers a reason to do something, with a possibility of a reward, and they’ll do it. Just look at the Curiosity cube.

Most gamers will do anything if there's a reward...
It’s time the lone wolves out there had a reason to hunt as a pack, rather than going all-out by themselves which, in my opinion, makes an online experience much less enjoyable. As we move onwards with console technology, and online-only experiences are becoming commonplace, it would be nice to see more teamwork based modes and rewards being thrown our way.

In what way, who is to say; that’s down to the developers to decide, but the only glimpse on the horizon so far is Star Wars Battlefront. MMOs are probably the best example of how teamwork in videogames can truly thrive, yet none have entirely succeeded on consoles. The issue of Player vs. Environment content (which is common in MMOs) as opposed to Player vs. Player is also somewhat of an interesting one, as this is an area in which teamwork could come to the fore of online gaming. Destiny briefly encouraged this but most of its online modes focused on players taking one another on, leaving many feeling cold and alienated. So let us hope that DICE can hit the nail on the head, that we find it hard to put our controllers down and finally play together, rather than alone…
To comment on what you've read here, click the Discussion tab and post a reply.
Article Discussion (35)