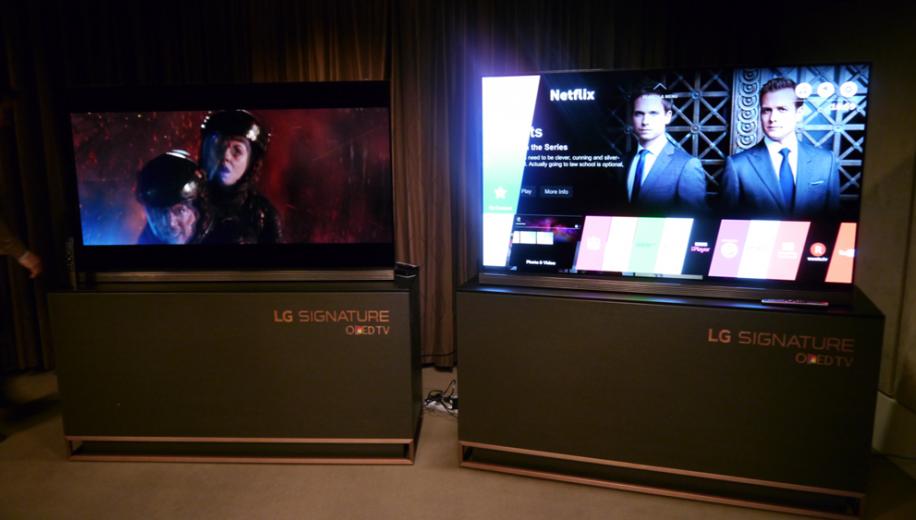 LG announced the UK launch of their new 2016 line-up of Ultra HD 4K OLED TVs and promised an improved level of picture quality this year, along with support for Dolby Vision and the latest version of WebOS.
LG were keen to champion both the development of their brand and their leadership where OLED is concerned. The manufacturer pointed out that they had spent over £10 million in the fourth quarter alone to promote OLED as a completely new technology. Their efforts to position LG as a premium brand and OLED as an exciting new technology appears to be working, with LG taking the number one spot in sales of TVs over £1,500 for the last four months. The new OLED range is headed up by the flagship G6, followed by the E6, the curved C6 and the entry-level B6, which doesn't include 3D. The E6 will be arriving in stores first, probably towards the end of this month, with the G6 arriving in May and the C6 and B6 hitting retailers in June. Initially the G6 will be available in partnership with John Lewis, although other retailers will follow later.

In terms of pricing, the flagship G6 will cost around £5,999 for the 65-inch model and an eye-watering £24,999 for the 77-inch version. The mid-range E6 will be available for a more affordable £3,499 for the 55-inch screen size and £4,999 for the 65-inch model; whilst the C6 and B6 will cost around £2,999 for the 55-inch screen sizes and £4,499 for the 65-inch versions. It's interesting that the curved C6 and the flat B6 are priced the same because the C6 includes support for passive 3D, whilst the B6 doesn't. This would suggest that LG expect the flat version to be more popular and are thus pricing to reflect this despite the absence of 3D. All these new OLEDs use Ultra HD 4K, support both HDR 10 and Dolby Vision, are certified Ultra HD Premium by the UHD Alliance and include WebOS 3.0. The E6 and G6 will also use a panel on glass construction and have built-in soundbars and soundbases respectively.

In terms of 3D, LG admitted it was no longer a priority and that support for the format would be reduced going forward but the OLED TVs that do support 3D will come with a pair of passive glasses included. Whether you feel the E6 is worth the £500 premium over the B6 will depend on how much importance you place on built-in sound quality and 3D support. However LG also hinted that the picture quality would be incrementally better on the E6 and G6 due to the different SoC (System on Chip) implementations being used - which also might influence your decision. We think the pricing of this year's OLED models seems fair when you consider everything they offer but if you are tempted by price reductions in last year's models such as the EF950V, you might want to consider the picture quality improvements on this year's OLED TVs.

In terms of picture quality the LG engineers were on hand to demonstrate the improvements made to their OLED TVs this year using a 65-inch G6. First of all LG have improved the screen uniformity and the engineers demonstrated this with a 5% (5 IRE) grey full field pattern. The screen certainly did look uniform with less vertical banding and no evidence of the dark edges or vignetting seen on previous LG OLEDs. However we will naturally test these improvements ourselves when the new LG OLEDs come in for review over the next few months.

Secondly the gradations just above black have also been improved, resulting in a smoother transition from black into grey. The transition out of black was more crude in previous generations but this has now been refined to eliminate black crush. The engineers were using a video level pattern that showed 24 and below; 16 was black and 17 was just visible before gradually increasing up to 24, showing that the 2016 models are better able to show shadow detail in images just above black. Again we will test this performance on all the LG OLED TVs that come in for review this year.
LG have made improvements to OLED picture quality with better screen uniformity and black gradation.
The 2016 models also deliver a wider colour gamut and according to LG the E6 and G6 should be able to achieve 99% coverage of DCI-P3 whilst the B6 and C6 would be around 96%. The new models are also much brighter and can achieve the minimum requirement of 540 nits of peak brightness required for Ultra HD Premium certification by the UHD Alliance. However LG said that in the case of this year's OLED TVs they could actually achieve specular highlights as high as 800nits with High Dynamic Range content, although this would vary from panel to panel. The incremental differences in picture performance between models is a result of the different SoC implementations being used. The E6 and G6 models have a more sophisticated SoC implementation because of differences like the built-in soundbar and the engineers have taken advantage of this to achieve a slightly better picture quality performance.

Whilst the overall brightness has been improved, its the brightness of specular highlights (small areas on the screen such as sunlight reflecting off metal) where OLED has a clear advantage over LCD because it is self illuminating. This essentially means that an OLED TV has over 8 million individual dimming zones, meaning it can be far more precise than any local dimming system. We watched a demonstration of the trailer for the Amazon series Mozart in the Jungle on two G6s, setup side-by-side. The G6 on the left was showing the trailer in HDR 10, whilst the one on the right was showing it in SDR. It was the first time we had seen a demo using two identical screens that had been properly set up and the difference between HDR and SDR was apparent. Aside from the brighter specular highlights, there was more detail in bright areas such as the views outside of windows, which were just blown out in the SDR version and also more detail in the shadows with HDR.

Aside from support for HDR 10, LG are the first manufacturer in the UK to release TVs that support Dolby Vision. This version of HDR has an HDR 10 base layer but also includes the option for a 12-bit layer and the possibility of a peak brightness up to 10,000 nits. Dolby Vision uses both static and dynamic metadata and, since it's an end-to-end solution, the system can ensure that the best possible image is retained from the mastering monitor to the display in your home. At present there are no Dolby Vision sources available in the UK but Netflix will begin to offer Dolby Vision soon and there will be Ultra HD Blu-rays encoded in Dolby Vision available in the future.

LG were demonstrating the same scene from the film Pan using two C6s set up side-by-side. The C6 on the left was showing the Blu-ray of Pan, whilst the one on the right was showing the same scene in Dolby Vision. The Dolby Vision version had a far more saturated image with brilliant colours and much more detail in the brighter parts of the image, it was easily a superior picture and the one we preferred. Dolby also said that we can expect to see Ultra HD Blu-ray players that support Dolby Vision released later this year. When we asked LG if they had any plans to release an Ultra HD Blu-ray player they said that "they were having that conversation". In the meantime we were left with the rather comical sight of LG being forced to use the Samsung UBD-K8500 as the only available source for the Ultra HD Blu-rays used in the demonstrations.
LG's OLEDs are certified Ultra HD Premium and are the first TVs in the UK to support Dolby Vision HDR.
Finally LG demonstrated the latest iteration of WebOS, their game-changing Smart TV platform. It's a testament to how good WebOS was right from the very beginning that even by its third generation the system is still essentially the same. The latest version has been recommended by Netflix, which means it offers certain key features - TV Instant On, TV Resume, Latest Netflix, Easy Access and Fast Launch. WebOS 3.0 will also offer a complete set of Video on Demand and Catch-Up services, as well Freeview Play which will be added next month. The system is now faster and in the summer LG will also add a backwards EPG (Electronic Programme Guide).

LG are certainly setting the bar very high this year and not only will their new OLED TVs offer superior picture quality with all the usual benefits of the technology such as deeper blacks, superior colours and wider viewing angles, but they will also be certified Ultra HD Premium and include support for Dolby Vision HDR. Once you include the latest version of WebOS with a faster platform and a comprehensive set of video services, along with some fairly keen pricing, you have a range of TVs that will undoubtedly be on every TV enthusiasts wish list.
To comment on what you've read here, click the Discussion tab and post a reply.
Article Discussion (241)