Or what happens when resources aren't Infinite 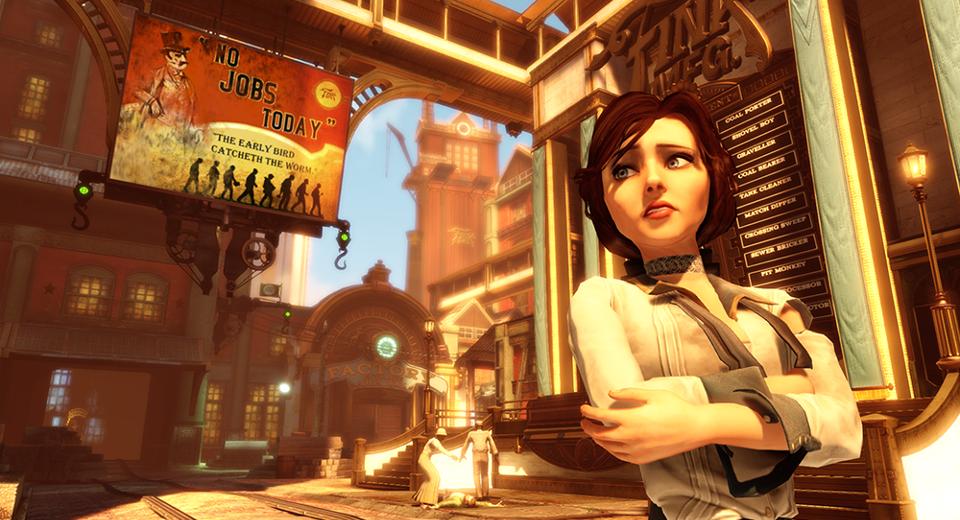 Bioshock Infinite PC Game (2013)
SRP: £34.99
Sad news came to light last week as Irrational Games announced that they were laying off the vast majority of their staff. The Bioshock Infinite developer, which at its peak employed over 200, is slimming down to just 15 to allow its creator Ken Levine to focus on a “more entrepreneurial endeavour.” For most of the studio’s workers the forthcoming and concluding chapter to the Burial at Sea DLC will be their last release before looking for new jobs.

Much has been made of the very Levine-centric press release that accompanied the news and indeed the stories that followed. When the condolences initially appeared on Twitter I rushed to a couple of prominent gaming sites and found myself slightly confused as a quick skim for “Irrational” drew a blank amongst their headlines. A slower read and it soon became clear that the wider world too had locked in on the creative force behind the Bioshock series and not the dozens of employees facing a worrying future.

I find that deeply distasteful and symptomatic of the figureheads that are now attached to games. Slapping a name, a personality, to a title is to some degree a sensible endeavour. There’s a cache in certain names and it’s an easy shorthand for the wider public to know what to expect: Sid Meier’s Civilization; Miyamoto and Nintendo; Metal Gear Solid’s Hideo Kojima. Ken Levine can be considered in that bracket. Yet despite being the driving force behind the success of the studio, creating a series of captivating worlds and engrossing games over its 17-year history, did he also play a key role in bringing it to its knees? Making games is an expensive process. Making triple-A games especially so. The level of polish and detail expected in them is phenomenal, requiring a large number of talented staff over the course of several years. Ideally each new game starts out with a vision, the details are then fleshed out in preproduction, and when they’re proven to be solid the team ramps up in size and steams on through to launch. Simple.

If only it were that were true. During the life time of development things change. Ideas initially proven out in the microcosm of a prototype suddenly don’t sit well in the larger product; designers have new perspectives on how certain aspects of the story should play out; and myriad other revisions that come from games being a creative process and not a set template. It is rare for anything to survive from beginning to end without some level of alteration.

To that degree, change is good. No one goes in with the intention of making a game worse with these direction shifts but the key is managing exactly how much goes on. There comes a point when, despite everyone’s best intentions, the churn needs to be shut down. When it’s recognised that you’re tweaking for tweaking’s sake it’s time to down tools and ship the disc to the shops. Fatally it seems Irrational and director Levine didn’t know when to stop.

Having creative minds such as Levine in the industry is a must. However, what they should have accompanying them is a chap in a suit telling them when enough is enough.
Running a business with that number of staff would have basic costs well in excess of a million dollars a month. Now run a project for five years and before you even take into account marketing and licensing – though compared to the rest of the budget sheet the cost of the Beach Boys and Tears for Fears must appear as mere blips - you have an eye-watering figure that has to be recouped. No wonder Take Two parachuted ex-Epic production director Rod Fergusson in to try and right the ship in the summer of 2012. Irrational had had their chance to make their dream but the cold hard facts of the bottom line needed to be served.

Despite shipping over 4 million copies of Bioshock Infinite, they were not.

Since the start of the year there have been tales of just how much the game had changed. Amongst them, former UX specialist Bill Gardner has been quoted as saying 5 or 6 games’ worth of content was scrapped. Some of which can be picked out in Elizabeth’s many guises, her powers and her roles as set out in numerous trailers and interviews over the years. It appears that as time went on someone wasn’t happy with Bioshock and was constantly trying to correct its course. Each in themselves may have seemed minor but the studio may well have suffered a death by a thousand cuts. Artists are so often not shrewd businessmen. They will want perfection, a goal that so often comes at a cost as many are never truly satisfied with their work. There’s always something that could be honed, a facet to improve, one iota of their project that will cause them to screw their face up in disgust as they’re simply not happy with it no matter how many people detached from the personal torture of creation say that it look just fine.

Having creative minds such as Levine in the industry is a must. It is their passion and imagination that brings us the wondrous worlds in which we play. However, what they should have accompanying them is a chap in a suit telling them when enough is enough. I personally think that both J. K. Rowling and Peter Jackson should have had editors shackled to them at all times due to their meandering work, but at least when they go on too long it’s either with a one-woman project or a guaranteed hit.

But I guess that’s what Take Two thought Bioshock Infinite was, too. Given the original’s sales they looked at this cash-cow and allowed Irrational to stray from the path, letting them wander as they thought that any extra creative time would be acceptable given the sheer amount of money Levine’s universe would bring in. The difference was, however, that the first Bioshock had a far smaller team and so the rewards were much higher despite racking up similar sales to that of Infinite. Let’s not forget that it also sold 4 million copies. “Triple-A” games are proving more and more a high risk bet for publishers. Just last year Square-Enix said that Tomb Raider’s sales of 3.4 million were well below expectation, and from that you can only speculate how much it cost to produce. They are literally gambling with people’s livelihoods at times as they stack more and more pressure on a single studio to sell well beyond expectations.

It should not be underestimated how much of a feat shifting over a million units of a single game is. We may have news feeds littered with tales that new release A sold B and X shipped Y but the vast majority of games released will not hit seven-figures. Irrational are sadly the latest casualty of this over-inflated sense of righteousness from publishers that a title will ship enough titles to make Scrouge McDuck envious.

I have no doubt there will be more high profile causalities in the near future. More tales of studio’s futures being gambled on big budget titles. And underneath it all, beyond the household name found in all the headlines, there will be those that you do not know by name. The hard working engineers, artists, designers, testers, musicians, and production staff that will suffer. Irrational Game’s management may be well positioned to start afresh but not everyone has that luxury.