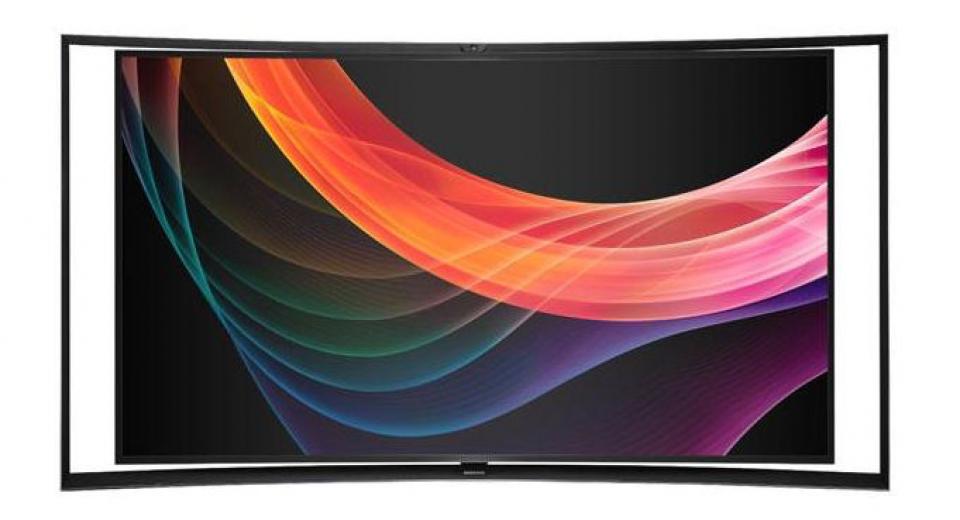 After numerous false starts, it seems as though OLED is finally ready for the mass market and there were numerous models on display at IFA, most of which had already been announced prior to the show.
Leading the OLED charge are the two big Korean manufacturers, with both LG and Samsung showing off curved varieties and LG also launching a flat panel version with a built-in picture frame that doubles as the speakers.

Starting off with Samsung, their KE55S9 Full HD OLED TV has finally hit the shops at a surprisingly attractive price of £6,999. The OLED screen has a slight curve to it, although when seen in the flesh the curve is very minor, and overall it is a beautifully designed TV. The stand surrounds the entire screen whilst doubling as the speakers and the build quality appeared to be excellent. Whilst the nature of the stand makes it look like the panel can be swivelled, in actual fact it can't which is a shame. Obviously as one of Samsung’s flagship TVs it incorporates plenty of features including their reference Smart TV platform, quad-core processing, built-in camera and two pairs of active shutter 3D glasses.

The KE55S9 also uses Samsung’s new One Connect box which serves three useful roles - firstly it has all the connections on it which means the actual panel remains clean and uncluttered. Secondly it means the only cables running to the TV itself are the proprietary connector and the power cable, although that’s less useful for the KE55S9 which can’t really be wall mounted. The final purpose is to allow for future Smart Evolution upgrades, so instead of slotting the upgrade pack into the back of the TV, Samsung just send you a new One Connect box. The fact that the box contains so much processing power and no fan, does explain why it gets quite warm over long periods of use.

One new feature on the KE55S9 is Samsung’s Dual View, which requires the purchase of optional glasses but takes full advantage of OLED’s faster response times. In a jaw-dropping demonstration we were able to switch between two completely different 3D signals using a small button on the glasses. There was absolutely no crosstalk in the 3D images themselves, nor was their any crosstalk between the two different signals, which was quite remarkable. The glasses also include a small earpiece, so two people can genuinely watch two completely different sources simultaneously - which might save a few failed marriages.

In terms of picture quality, the KE55S9 displayed all the benefits of OLED with absolute blacks, bright images, fast response times, incredible motion handling, vibrant colours and generous viewing angles - the curved screen notwithstanding. Whilst the panel is only 1080p the content on display certainly looked impressive on the 55” screen and given the lack of any current 4K content, there’s a strong case to be made for going with OLED rather than UHD right now. We didn’t see any signs of image retention, which has certainly been apparent on previous panels but until we get a review sample we can’t say for sure if this issue has been fully addressed. One of the other issues with OLED in the past has been that the blue OLED decays faster than the red and green ones, diminishing the panels lifetime. Samsung explained that to combat this, the blue OLED on the KE55S9 is twice the size of the other two primary colours. We were able to confirm this by looking at the pixel structure up close and seeing that the blue sub-pixel is indeed twice as big as the other two, extending its life and thus the lifetime of the panel. After getting a good look at the KE55S9, we can certainly say that Samsung have delivered a gorgeous looking TV that at £6,999 offers a surprisingly attractive price for an OLED TV.

Compared to Samsung, who appeared to be almost everywhere this year, LG’s presence at IFA was somewhat low key with no press conference and no new products to announce. The Korean manufacturer’s 55EA9800 Curved OLED TV had been launched prior to the show but IFA did at least give us a chance to take a closer look. The LG designers have been hard at work and the gently curved panel sits on a transparent base which LG have dubbed the 'Crystal Stand'. The overall appearance is quite striking and the combination of a minimal bezel and a 4.3mm depth adds to the 55EA9800's appeal.

However the screen itself was very reflective, a fact that was made all the more obvious by the bright lights in the convention centre.
Hopefully LG will address this with future models or it could be a real issue in certain rooms.

Despite the ultra-slim proportions, LG have managed to find room for 4 HDMI inputs, 3 USB ports and a Common Interface slot. We were also glad to see the sideways facing inputs were far enough from the edge so as not to be too obtrusive. Facing downwards there were aerial and satellite sockets, a headphone jack, an optical digital audio output and some legacy connectors. Whilst the full specifications aren't available, and neither is a UK price, it's safe to assume that the 55EA9800 will include all the features found on LG's other flagship TVs. The 55EA9800 is also the first OLED to receive THX certification, which certainly bodes well for its picture quality and image accuracy.

The images on the 55EA9800 were certainly stellar and even after nearly two years of seeing OLEDs in action, the picture quality is still breathtaking. The dynamic range afforded by the combination of pitch blacks and bright whites is just awe-inspiring and the motion handling and colour gamut was equally as impressive. There's doubt that OLED will deliver the kind of images that AV enthusiasts dream of and as long as the issues with lifespans and image retention have been licked then the future looks decidedly bright. LG use their WRGB OLED technology, which adds a white sub-pixel to help address the lifespan issues. The Curved OLED wasn't the only model that LG had on display, there was also their 55EA8800 Gallery OLED TV that includes a picture style frame and can display art work when not being used. We weren't totally convinced by this concept, it seemed rather gimmicky but at least you could remove the OLED TV itself, giving you a flat panel to wall mount. The use of the frame as a 2.2 speaker setup might make for good audio but it's impossible to tell on a packed show floor. The OLED panel certainly did a fantastic job of displaying the art work but if we're being honest, we'd rather our TV looked like a TV and not a painting.
One of LG’s big announcements was their prototype 77” 4K UHD Curved OLED TV, currently the largest OLED TV in the world.
Whilst there always tends to be a bit of one-upmanship when it comes to screen sizes at these shows, LG’s massive UHD Curved OLED TV is also their most advanced next-generation TV to date. The TV combines LG’s WRGB OLED and Ultra HD technology, enabling it to produce an infinite contrast ratio and resolution four times greater than regular Full HD. It certainly looked very impressive and at that screen size, it’s curved nature was easier to justify. The big question is that given how hard it has been to produce 55” OLED panels, will a 77” screen ever be practical?

Concerns over screen sizes aside, there’s no doubt that 4K OLED remains the Holy Grail of TVs and all the major manufacturers had their UHD OLED TV on display. Samsung announced their 55" 4K OLED at the show, whilst Sony were showing the same panel that they revealed at CES back in January. Panasonic meanwhile had their second generation UHD OLED TV on display, a panel that they were keen to stress included no Sony technology. The combination of OLED technology and the higher resolutiuon of UHD is certainly hard to resist and there’s no doubt that this technology represents the future of TV. Here's hoping we see some actual models go on sale next year.
To comment on what you've read here, click the Discussion tab and post a reply.
Article Discussion (7)