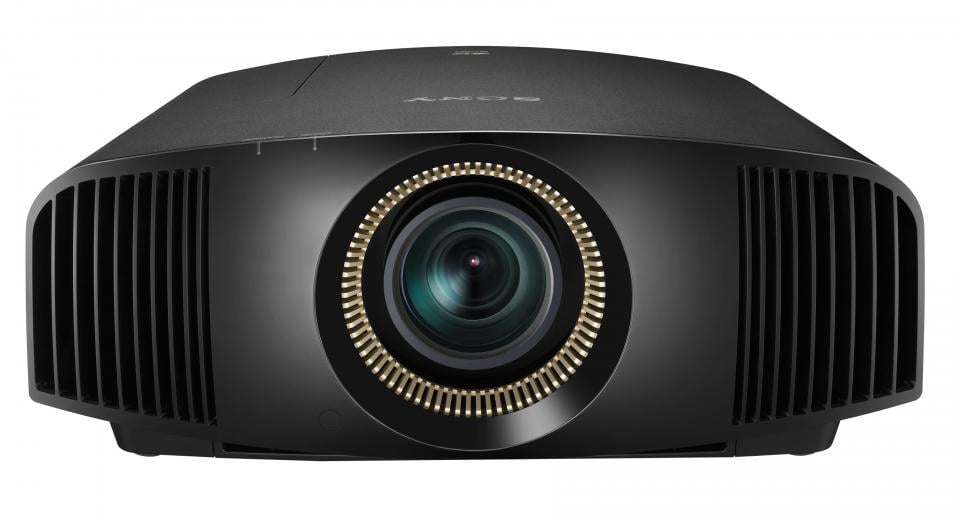 Sony VPL-VW500ES Projector (2013)
SRP: £8,500.00
Sony were first out of the gates when it came to 4K, releasing their incredible VPL-VW1000ES 4K Projector back in January 2012!
We reviewed it in April of that year and were amazed that Sony had effectively crammed a professional 4K projector into a consumer package. There might not have been any 4K content at the time - there still isn’t much now - but Sony were clearly streets ahead of the competition, although all this innovation came with a hefty £17,000 price tag.

Now Sony have stolen the limelight again with last week's launch of the VPL-VW500ES at IFA, which offers the reality of 4K projection at a rather more accessible price of £8,500. The VW500 uses the same DCI specifications as the VW1000, which means it can deliver both the full cinema 4K resolution of 4096 x 2160, as well as the new Ultra HD resolution of 3840 x 2160. The image is created using three native 4K SXRD panels that leverage off the back of Sony’s 4K expertise from the professional digital cinema market and deliver a response rate of 2.5ms.

Unlike the VW1000, the new projector also has the latest HDMI 2.0 inputs to accommodate 4K content at up to 60Hz. This will allow for smoother motion and better temporal resolution with 4K content recorded at 50 or 60Hz. Existing owners of the VW1000 can have their projector upgraded to HDMI 2.0 but there will be an associated cost. If the standard for 4K ultimately moves to 100/120Hz then Sony believe they can just update the VW500‘s firmware in exactly the same way as they are currently doing with their X9 4K TVs. There's a USB port on the VW500 for just such an eventuality, as well as any other future firmware updates.

The VW500 also features Sony’s proprietary 4K upscaler called Reality Creation, which is designed to enhance high definition 1080p content, allowing viewers to enjoy 4K images with their existing Blu-ray Discs, even in 3D. Furthermore, the VW500 has an original 4K up-scaling algorithm designed for “Mastered in 4K” Blu-ray Discs from Sony Pictures Entertainment, which is supposed to enable a more accurate 4K native picture quality when upscaling. We remain somewhat skeptical of these claims but there was no denying that upscaled Blu-rays looked superb when we had a private demo of the VW500. Sony has also upgraded their Motionflow frame interpolation software, creating a 'combination' mode that uses both the Film Projection and Motion Enhancer features. However the purists amongst us will be glad to hear that there is also a 'True Cinema' mode that retains the look of 24fps film.

The VW500 also has a claimed contrast ratio of 200,000:1 which is higher than the VW1000, although this is achieved through a combination of Sony's 'Advanced Iris 3' dynamic iris and the same SXRD panel found on the VW1000 that has improved native contrast performance. There is an electronic panel alignment feature which allows the red and blue panels to be adjusted with respect to the green panel by as little as 0.1 pixels. The VW500’s optical engine and SXRD panels also incorporate Sony’s Triluminos display technology, allowing it deliver a wider colour space. The VW1000 always included Triluminos technology but Sony have only just started marketing that fact now that it has been given a brand name.

The VW1000 actually has a wider colour space than the VW500 and can hit DCI specifications, which apparently the VW500 can’t.
That isn’t the only area where the VW1000 remains superior as the more expensive projector has 2,000 ANSI-lumen brightness compared to the VW500’s 1,700 ANSI-lumens, although that’s still very bright. The major difference between the two projectors is in terms of the lens and it’s here that Sony have shaved off some of the cost. The VW1000 has an 18 piece, all-glass lens assembly whilst the VW500 has a 1 plastic and 13 glass piece lens assembly. The result is not only a lower price but also a more compact chassis that’s 18cm shorter than the VW1000, and a significantly reduced amount of weight (14kg compared to 20kg). The VW500 achieves this compact chassis size through a combination of a short projection lens and a 'bending optical block'.

In other respects, the VW500 has a similar chassis construction to the VW1000, with a front facing fan and side facing inputs, so you don't have to worry about rear space when installing the projector. This means you can maximise the throw distance for a larger projected image. The VW500 has a throw ratio between 1.38:1 and 2.83:1, thanks to a 2.06 times motorised zoom lens. It also has a wider lens shift of up to 85% vertical and 31% horizontal, giving greater installation flexibility - even when the ceiling is very high. There is also a Picture Position Memory, which allows you to easily zoom and shift the image between a 1.85:1 and 2.35:1 aspect ratio.

Unlike the VW1000, the cheaper projector includes a full colour management system which allows users to adjust the hue, saturation and brightness to obtain a calibrated picture. There is also an auto calibration feature, that uses a built-in colour sensor to store the original measurements and periodically adjust the settings as the bulb ages. Sony has also included a built-in RF transmitter for the active shutter 3D, which provides further installation flexibility with a strong wireless signal for wider coverage. There's also an optional wireless HDMI emitter/receiver kit for Full HD up to 60Hz, allowing you to wirelessly connect the VW500 to your various sources.
Well that's all the specifications covered, the real question is how did it look in action? In a word - breathtaking.
We were treated to some beautifully shot 4K footage of Africa and, projected onto a very large screen, the benefits of 4K were clear to see. The image accuracy, the brightness, the blacks and the sheer amount of detail on display was just staggering. The demonstration was using the dynamic iris but there were no obvious shifts in brightness as it opened and closed, resulting in impressive dynamic range. We then watched the trailer for Elysium in 4K and, again, it looked incredible, although we did see some slight judder in the fast camera moves, which may have been caused by the server Sony was using.

When we moved on to upscaled Blu-rays the Reality Creation engine really came into its own, taking full advantage of the higher resolution panel to deliver images that you would almost believe were native 4K. Sony used the 'Mastered in 4K' copy of The Amazing Spider-man and whilst some of Sony's claims regarding these Blu-ray discs are slightly dubious, there's no denying it looked superb on the VW500. The images were bright, blacks looked deep, colours natural and there was a fantastic level of detail without any noticeable processing. Despite its relative brightness, the VW500 was also a very quiet projector and at no point during the demo were we aware of the projector's presence.

The VW500 certainly looked as impressive as the VW1000 did when we had that projector in for review last year and although both models will be available concurrently, we really can't see any reason to pay twice as much for the VW1000 when the VW500 looks this good. It's early days in the 4K projector wars but currently the only two available are both made by Sony, which effectively means the Japanese manufacturer has the market to themselves. There will undoubtedly be other 4K projectors launched in the coming months but with its combination of performance, features and price, Sony's VPL-VW500ES is going to be a tough act to follow.