How to watch everything you want this Christmas

Our Festive guide to PVRs, Streaming and Catch-up 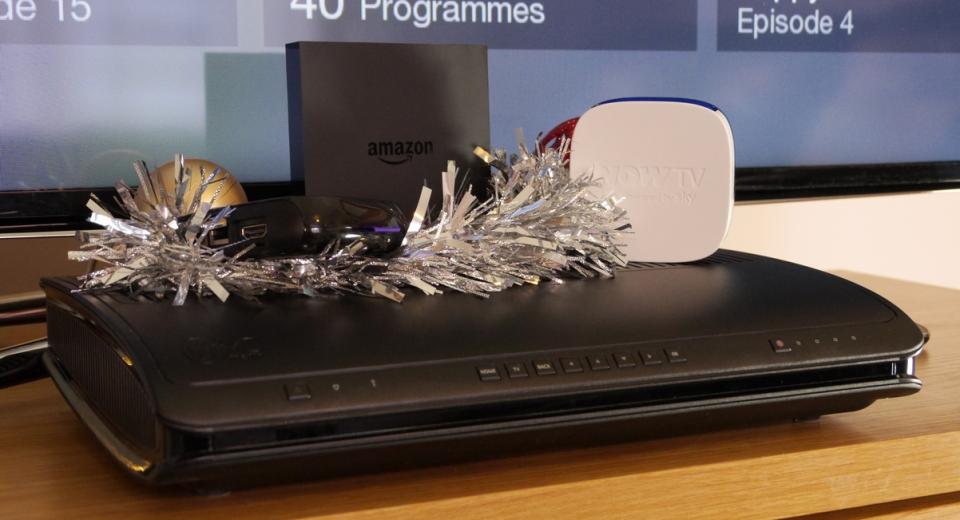 While the Christmas TV schedules don’t hold the same allure they once did, it’s still a great time of year for catching up with any movies and TV you’ve missed out on - and perhaps for recording a few things, too, to watch at a later date.

There’s an ever-growing number of ways you can do that, nowadays, from catch-up and streaming services to personal video recorders and even your Smart TV. So here’s our Festive guide to watching the best in Movies and TV this Christmas.


You’re probably well accustomed to the idea of the Personal Video Recorder (PVR), by now, and whether you have a Sky+, TiVO, V+, YouView, Freeview or Freesat box you should, at the very least, be able to set a basic recording, plus pause, rewind and fast forward ‘Live TV’. Making a recording is usually just a case of highlighting the programme in the EPG (Electronic Programme Guide) and then pressing either the Record or OK/Enter button on the remote. We’re sure you know what the Play, REW and FF buttons do and where they are on your remote control.

So with your recordings safely set, you’ll want to get down to the serious business of watching them but with the hectic Xmas schedule, you may need to start doing so before the movie ends. Any PVR worthy of the name will allow you to ‘Chase Play,’ meaning you can start viewing the beginning of the programme before the recording finishes. That’s usually done by entering the Recordings area of your PVR and hitting the Play/OK button on your remote. But at this time of year it’s easy to forget to plan your viewing and you may be out when the realisation hits that you’re going to miss something you really wanted to see. Don't despair, there’s a good chance that your box has a companion mobile app that will allow you to set up remote recordings. Naturally you’ll need to have downloaded the mobile app from your app store of choice and you’ll also need to pair the mobile to the PVR box but, once done, wherever you have an internet connection, you’re good to go. Sky+, TiVo, YouView and Freesat (Freetime capable) boxes, at least, have the chance at recording salvation.

There's really no excuse for missing anything nowadays


Even if you don’t make that recording, by whatever means possible, all hope is not lost and the chances are you have some sort of device that can access catch-up and video streaming services. Most modern Smart TVs, games consoles, PVRs and Blu-ray players have at least the BBC iPlayer app and since its update to a new interface and 30 day’s worth of catch-up entertainment, there’s a ton of stuff to watch and it’s now all very easy to find. We also really like Channel 4’s 4OD platform which, contents rights permitting, holds all of the broadcasters’ programing indefinitely.

We’ll gloss over Channel 5’s ponderous offering but the ITV Player is getting better and spreading on to more devices, since their exclusivity deal with Samsung now seems to have expired. Samsung products are still amongst the very few to provide all the major UK catch-up services in one place, however, so if you’re currently looking out for a new TV or player, that may be something to consider. They have recently been joined by Panasonic with their range of Freetime enabled TVs but no other TV manufacturer can boast the full suite. Owners of TiVO, SKY, V+, Freesat (with Freetime), and YouView boxes (including BT and Talk Talk), also have the benefit of access to BBC iPlayer, ITV Player, 4OD and Demand 5 and of course you can always get at them through your browser or PC app. Your smartphone or tablet is also likely to have access to the catch-up apps, especially if it’s an iPhone or iPad. Your Android device will need be a minimum of Version 4 for 40D and 4.2 for the ITV Player, however, so you’ll need to check compatibility. Windows phone users also get all the major UK catch-up player apps – who’d have thought it?

Make sure you keep tabs on your data usage when using video streaming services as they consume a lot of it and you don’t want to be chewing up all allowances too quickly. Wherever possible, switch to a WiFi connection. There are numerous dedicated media streaming boxes on the market but only one brand can lay claim to all the major UK players. The Roku 3 or HDMI Streaming Stick would be our choices with the former, in particular, having excellent apps for each. The recently launched Amazon Fire TV has a very good iPlayer too and we would expect Channel 4 and ITV to jump on board the platform very soon. If not, you can always sideload (anchor) the 4OD Android app on to the Fire TV.


It is entirely possible that you’ll find very little that tickles your fancy on the broadcast schedules and that’s when the convenience of paid-for video streaming services come into their own. They broadly fall into three categories; one where you pay a fixed monthly subscription and are able to stream as much as you like from the catalogue; another where you pay to either rent the movie for a set period of time or you pay to ‘own’ it, digitally, where it will be stored in the ‘Cloud’ for you to watch whenever you like. Naturally, you’ll want to be sure whichever digital provider you choose isn’t likely to disappear anytime soon. The third type, and you probably guessed it, is a mixture of all you can eat and rental/ownership services.

You can get incredible value from streaming services Our (AVForums Editorial) personal preferences are for the fixed-price deals but if you want the latest movies, you’ll need to rent or buy. You’re hardly limited in your choices so you are best advised to choose the platform offering you the most convenience. In terms of mobile devices, Apple owners will obviously favour their App Store, for Android it’s Google Play and so on. When it comes to TVs, or rather devices connected to them, you’re restricted to the Apple TV devices (App Store) and the Roku devices for Google Play.

Then there are the broadcasters who offer their own on-demand services. Subscribers to Sky, Virgin, BT and Talk Talk can all have access to the latest blockbuster movies and TV shows, via their set-top-boxes. Additionally Sky offers the Sky Store with access to their Movie catalogue, without the need to subscribe to them as a customer. Again, the Roku (we’re not sponsored by them, honest) devices can offer the SKY STORE, in addition to Sky NOW TV which is something slightly different again…

Sky’s NOW TV service offers a choice of watching some of their exclusive entertainment channels, titles from the Sky Movie catalogue or limited time passes to watch the Sky Sport Channels. Unsurprisingly, the three packages are labelled as Entertainment, Movies and Sports. The Entertainment and Movies package operate on a monthly subscription basis while you can buy daily or weekly passes for Sports. It’s an interesting alternative to paying a Sky subscription and at £6.99 monthly for the Entertainment package, we think it’s good value. Just having access to the latest gems from Sky Atlantic (Game of Thrones, Boardwalk Empire etc…) is worth the money alone for us. NOW TV, in one form or other, is also available on YouView, Android, iOS, NOW TV boxes, some LG Smart TVs, PS3/4 and Xbox 360. Sky and Virgin both offer exclusive apps for subscribers, too, with the Sky GO/GO+ and Virgin TV Anywhere. These allow you to access your subscribed channels, wherever you have a WiFi connection but, as far as the Virgin app is concerned, that is only currently a feature in iOS. Sky currently caters for Android users better and anyone with a device running 4.0 should be able to stream their channels; of course, Apple owners also get the full suite of features.

Many of you will already be acquainted with the joys of Netflix. For a similar price to NOW TV, you get access to seemingly countless TV box-sets and a decent catalogue of movies. It’s the World’s number one internet TV service and it’s easy to see why with a near ubiquitous presence on smart devices and a slick user interface backing up the wealth of content. It is our favourite, at present, and with its commitment to 4K streaming, HEVC and HD audio, going forwards, it just seems to go from strength to strength. Getting to see some of Netflix’s original content is worthy of a couple of month’s subscription, in itself, with high quality titles like House of Cards setting the bar extremely high.

Amazon’s Instant Video Service is one that operates on two tiers and also has a lot to offer and, like Netflix, they commission their own exclusive programming with 4K content also on the way. You can take out a Prime subscription (£79 annually) and have instant access to thousands of TV shows and Movies – in addition to the other Prime benefits of next day Amazon delivery, unlimited cloud storage and the Kindle lending library – or you can choose to rent or buy the latest titles. The Amazon Instant Video app is available on games consoles, Android, iOS, as well as assorted LG, Samsung and Sony Smart TVs and devices. We’d consider Amazon as Netflix’s primary adversary and the competition should be great for consumers.

That wraps up our look at some of the best ways to make sure you see all the things you want to see this Christmas, we’d love to hear what you’ll be watching - and how – in the comments section below.