In space you can hear everything 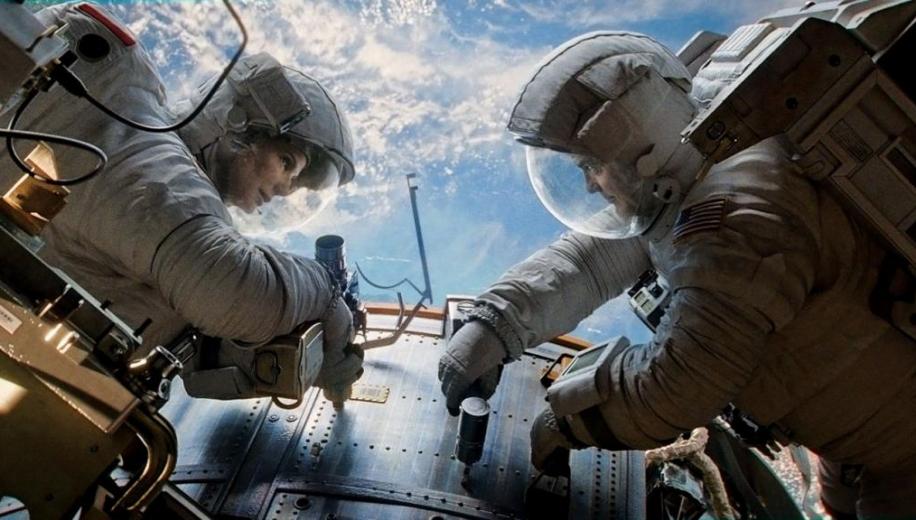 Gravity Blu-ray (2014)
SRP: £26.99
If ever a film was made for Dolby Atmos it's Gravity with its highly directional sound design.
Note: As we discuss the soundtrack there are some spoilers. The assumption is made that you have seen the movie.

The film justifiably won Academy Awards for Best Achievement in Sound Editing and Sound Mixing, as the filmmakers took full advantage of the opportunities offered by Atmos. Dolby's new immersive audio format was launched four years ago and utilises an object-based approach to sound design. In conjunction with additional speakers at the sides and rear, subwoofers in all four corners of the auditorium and two arrays of overhead speakers, the format allows sound designers an unprecedented level of creative freedom. Instead of mixing for specific channels, Atmos can treat dialogue music and effects as 'objects' that are moved around in three-dimensional space. For a film about astronauts stranded in space, there was no better marriage of story and technology.

Since arriving at the cinema there have been over 200 films mixed in Dolby Atmos and, in the second half of last year, the format was finally launched in the home. The domestic version of Atmos obviously can't use as many speakers as the one employed in commercial cinemas but it manages to replicate the immersive experience using a combination of a standard surround speakers and up to four overhead speakers. The majority of AV receivers offer a maximum speaker configuration of 7.2.4 which means a seven speaker layout at ear-level (fronts, centre, sides and rears), along with two subwoofers and four speakers overhead. Dolby provide the option of special upward-firing speakers that bounce the sound off the ceiling to offer a similar effect without installing speakers above your head. In our Dolby Atmos equipped home cinema we use a full 7.2.4 configuration with tonally matched surround speakers at ear-level, two subwoofers at the front and four speakers overhead. To date we have reviewed ten Atmos encoded Blu-rays using this setup but the majority are new releases which only have the Atmos version. Gravity is the exception because it was originally released on Blu-ray in early 2014 and then re-issued as an Atmos encoded Blu-ray in early 2015. Since we owned both versions it gave us a unique opportunity to compare the 5.1-channel DTS-HD Master Audio soundtrack on the original release with the Dolby Atmos soundtrack on the re-issue. We should stress that in this article we are not comparing DTS-HD Mater Audio with Dolby TrueHD but instead a normal 5.1 channel mix with the object-based version created for the same film. When Gravity was first released on Blu-ray, many fans of the film lamented the lack of even a 7.1-channel mix on the disc, especially as it had been originally mixed in Atmos. However overall it was a fantastic release with reference picture and sound, the option of 2D or 3D and an excellent set of extras.

So the idea of having to double-dip would normally be annoying but the promise of an Atmos soundtrack softened the blow, especially as that wasn't an option when the Blu-ray was originally released. The new Blu-ray, which forms part of Warner's Diamond Luxe edition of discs, includes all the previous extras, plus some great new ones, including 'Gravity: Silent Space' which provides the opportunity to listen to the film in Dolby Digital 5.1 without any music, allowing you to fully appreciate the film's inventive sound design. There's also an interesting documentary called 'Looking to the Stars: The Evolution of Space Films' which details the realistic depiction of space travel in film. Finally there's a featurette called 'Gravity: The Human Experience' which includes interviews with real astronauts and a humorous birthday message from star Sandra Bullock to her director Alfonso Cuaron. However for some strange reason the re-issue doesn't include the 3D version of Gravity which is a shame because along with its highly directional sound design, the film was also conceived to be watched in 3D.
The re-issued Blu-ray of Gravity was tested with a full 7.2.4 Atmos configuration including four genuine overhead speakers.
When it comes to Dolby Atmos at home, the big question everyone asks is can you really hear a difference? After all if someone is going to invest in a new receiver and contemplate hanging speakers from the ceiling or buying a set of upward-firing Atmos speakers, they want to know it will be worth all the time and money. After reviewing ten Dolby Atmos encoded Blu-rays, we can certainly attest to the fact that the format not only works but, when done well, really adds to the viewing experience. An effectively mixed Atmos soundtrack can make a film's audio more visceral, realistic and immersive - often making even mediocre films more enjoyable. In addition, Dolby Atmos uses a Dolby TrueHD 7.1 core, with the object-based elements layered on top, so even if you don't have an Atmos capable receiver yet you can still enjoy the soundtrack in seven channels and possibly upgrade later.

We started this comparison by watching the original Blu-ray release in 5.1 lossless audio and then we watched the re-issue in Dolby Atmos. After that we chose specific scenes which we felt really demonstrated the potential of Atmos and watched those scenes again on both discs. The first thing worth mentioning is that the original 5.1-channel mix is superb, so if you have no plans to upgrade to Atmos you can still enjoy a wonderfully inventive and expertly mixed soundtrack. We tried outputting the soundtrack in 7.1 and that did a good job of filling in the space directly behind us and we also tried the Dolby Surround Upmixer (DSU) which worked surprisingly well at adding sounds from above. However despite all this, the full Atmos soundtrack was a revelation that fully replicated the filmmakers intentions with the most directional and immersive surround sound we have yet experienced.

From the opening scene you notice the difference that Dolby Atmos makes as the shuttle floats past the camera and the astronauts move around talking to each other and to Mission Control. The various voices move around the room in conjunction with the source of the dialogue and this is especially true of George Clooney's character, who is flying around on a back pack. As the camera moves down towards Sandra Bullock's character in one long continuous take, the Cap Com (Voiced by Ed Harris) moves overhead. You get a sense of this in the 5.1 mix but in Atmos these diegetic sounds simply move around the room seamlessly in three-dimensional space. Once disaster strikes and Bullock's character goes tumbling off into space, the camera moves inside her helmet, giving you her perspective. So Clooney's voice spins around and above you as Bullock's POV desperately looks around for visual markers. The sound design also puts you inside that helmet by echoing her breathing and other sounds all around you, whilst her dialogue emanates from directly behind you.

Since there's no sound in the vacuum of space, the filmmakers cleverly use sound transmitted through the bodies of the characters in order to create sound effects, as actually would be the case in reality. The way these muffled low-end effects are transmitted through the objects the characters touch really adds to the veracity and in Atmos the sounds move around the sound field, as if you were feeling them yourself. The subwoofers are also brought into play here, giving these sound effects a low-frequency kick that makes them more physical. The filmmaker's attempts to realistically portray how sound would behave if you were in a vacuum means that the score is more important than ever. Steven Price does an incredible job of using the score to suggest sound that isn't actually there and thus it is far more directional than a normal score. In the first minute of the film there's a series of title cards explaining how inhospitable space is and the score builds as if the pressure is about to crush you, before suddenly disappearing as the action enters orbit.
The 5.1 mix on the original Blu-ray release of Gravity is great but the Atmos version is an aural revelation.
The ability of Atmos to completely immerse you in a dome of sound really comes into its own once Bullock's character goes inside the International Space Station. As she opens the value and the airlock fills with oxygen the sound returns and there are noises all around you - to the sides, front, rear and above. You can hear creaks and alarms and other effects and they remain focused on where Bullock's character is, so as she passes a source of noise it remains fixed relative to her location. When a fire breaks out the sound of the flames totally engulfs both Bullock's character and the viewer. As she moves to the bottom of the station and the flames are above, the sounds are coming from the overhead speakers. The same is true during re-entry as the Soyuz capsule hurtles through the atmosphere and a rattling and roaring surrounds both Bullock's character and the viewer. The addition of Atmos simply makes all these sequences incredibly visceral, totally investing the viewer in Bullock's struggle to survive.

The majority of Gravity was shot using digital cameras, however director Alfonso Cuaron shot the final Earth based scenes on 65mm film stock to give this sequence a feeling of hyper-reality. As with the rest of the film, the Atmos soundtrack also plays its part, bursting to life with sounds of nature all around and reminding the viewer of the relative safety of the Earth. The audio mix is filled with the sounds of water, wildlife and even bugs flying around overhead, emphasising the rebirth that the sequence represents. It all helps to add to the emotional impact of the film's conclusion and brings to an end a truly remarkable soundtrack. There's no denying that Gravity proves just how effective Dolby Atmos can be when used in a creative way and it's superior to the 5.1 mix in every respect. So if you're looking for a demo disc to show off your new Atmos capable system, then Alfonso Cuaron's cinematic thrill-ride should be the first Blu-ray you buy.

You can buy the Dolby Atmos version of Gravity on Blu-ray here
To comment on what you've read here, click the Discussion tab and post a reply.
Article Specs Discussion (87)

The Director's Cut of Nightbreed - What is all the fuss about?
H
Is 4K Netflix better than Blu-ray?

Nosferatu - Delving deep into the horror

The Howling - A look back