The Gods Will Be Watching You Cry 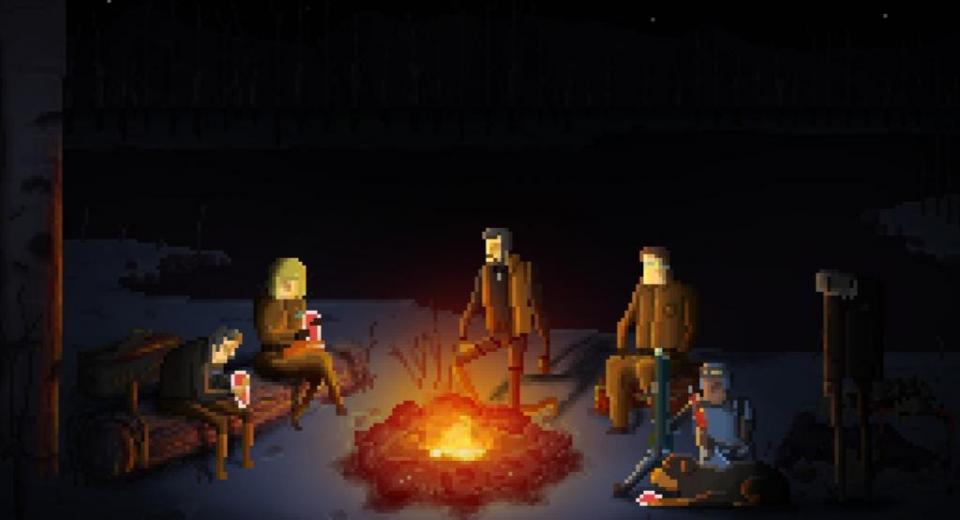 At the time it was a proof of concept, an interactive trailer as to what would come, but even then it looked fascinating. It opens as it does now, revealing a small band of scientists and soldiers seeking solace in the flickering light of a campfire. They are abandoned and alone. In the pixel art style I associate mostly with my underpowered PC of the mid-90s trying to run supposedly beautiful games in bastardised 320x240 VGA, they fidget and fret about their chances of survival.

Their moving form captured in a limited palette of blocky colours yet detailed enough that you could sense their agitation. Night by night you’d be forced into tough decisions, sending out party members to forage, calming down the edgy, and distributing medicines carefully, all in the hope that at least some of you would make it off the desolate hole you found yourself stuck on.

It all seemed incredibly bleak but what I loved was its unabashed willingness to force you into making hard choices. With an unerring ease it put you in a spot and kill off your compatriots, barely batting an eyelid as it did so. Yet it handled it in such a modest way; that scene of them sitting around the campfire was the only shot you would see. After every evening’s worth of deliberation the screen would fade to black before reappearing and revealing the consequences. The single-screen presentation added to the feeling there was no escape from your situation.

From arm’s length it was fun watching the streamer becoming increasingly pained upon realising a seemingly sensible choice had led to an unforeseen and fatal outcome. What also became evident was just how unforgiving the scenario appeared to be as there was next to no hand holding. A brief explanation of what you could do was offered but as to its butterfly effect, well, why don’t you click on it and find out? Flash-forward to the present and I have the utmost sympathy with that original streamer. Working my way through the opening chapters of Gods Will Be Watching by myself was stressful enough, let alone with the many eyes of the Internet spying on your progress and judging every call you make. Developers Deconstructeam have taken that initial proof of concept and expanded it, creating a series of fiendish set pieces that will test your compassion and your patience.

Your adventure still opens on the scene of our survivors sat around an open flame but a quick reminisce places us elsewhere. Two of the party have previously been involved with a questionable group named Xenolifer and we find them storming a high-tech science facility seeking a cure for a pandemic that’s sweeping the galaxy.

It’s too early to really tell who the real bad guys are but what is clear is that to get out alive you have to hack into the lab’s mainframe whilst keeping control of the restless lab workers you’ve taken hostage. Meanwhile in the corridor outside are a group of armed guards very keen to say hello and a skilled hacker undermining your sterling work. OK, says the game, get yourself out of that…

In most other situations you’d probably tap X a lot to hack your way through layers of security before dashing gun blazing down the corridor to smite the threat before it reaches you. Here, however, you have to step carefully. Every member of your group has a selection of actions, each affecting the scene in some way. The Sergeant can kick or calm the hostages; your hacker may boost security or prepare the data extraction; the gunner is there to keep the ever approaching guards at bay.

It’s a balancing act as ignoring any one aspect can cause the situation to go rapidly south. Fail to keep the hostages in check and they’ll try and escape or kill you; ignore the counter-hacking threat and your progress will be wiped; pretend the guards outside are bluffing and you’ll be a breach-and-clear away from the Game Over screen. Although mightily confusing at first, not least because you are discovering this interconnecting web of systems, the artists involved have done an incredible job of communicating everything you need to be aware of. It’s just that you need to be paying attention to realise it. Security cameras can be hacked to see the guards’ progression outside, whilst subtle animations show the agitated state of the hostages.

You pick up on when you need to force the guards back or calm your captives and it soon all becomes about crisis management and trying to keep all your plates spinning. What made it incredibly rewarding was that breakthrough. Going from thinking I had been thrown to the lions and battling against unsurmountable odds before noticing (even it if is through trial, error and death) the crucial tells.

In many ways Gods Will Be Watching is the Dark Souls of point-and-click. Both may seem that you’re being set an impossible challenge but with practise and patience comes the reward. This is clear in the following chapters, too. The next sees the Sgt. and our gunner under interrogation, their goal yet again is just to get out alive.

What is interesting is that rather than replay the first scenario here you have a whole new set of mechanics to learn. Each day sees you enduring torture – featuring some very unsettling sound effects – from one of a number of tools. There’s no plate spinning here, just trying to bluff and beg your way through to nightfall and a chance to rest.

Though clever, the very slow pacing in this second portion made it drag slightly as failure - an inevitability - brought with it a long pauses in interaction as you waded through the scripted sections at the start and end of each day again and again. Though that said, the change in focus is welcome and prevented proceedings even at this early stage from becoming too much about firefighting and instead focused on tough decisions in a difficult environment. This is no more evident than in the final of the preview chapters as not only do our characters risk their lives but can wilfully sacrifice themselves and others for the cause. Again trapped and in mortal danger – please take this as read from now on – our merry band have to not only discover a cure for the pandemic by testing lethal vaccines on themselves but simultaneously dig their way out of a hole in the ground, keep the generators charged, and all within 36 hours. Oh, and there’s a dog.

What I valued about Gods Will Be Watching was not just the creative and tricky predicaments they placed you in but also the overwhelming sense that the odds were severely stacked against you. And in the latter’s case, that’s because they are. Each situation is a complete puzzle in and of itself that you need to at first figure out what its parts are, then test how those parts fit together without exploding, and finally complete the puzzle only to find out it’s one of those Magic Eye images of a sailboat that makes your head hurt.

It would have been all too easy to flip the table and walk away frustrated by the sheer challenge offered by Deconstructeam but as with Dark Souls persevering brings with it rewards. This is not a game that is hard for the sake of it, no, it’s just hard if you don’t understand how it fits together. It teaches you to be aware, to constantly try and stay on top of the situation and in fact may have made me a far better multitasker than I ever was before.


Gods Will Be Watching will released on the 24th of July 2014 for PC, Mac, and Linux.
To comment on what you've read here, click the Discussion tab and post a reply.
Article Specs Discussion (3)