Manny Brown gets hands-on at Gamescom 2013 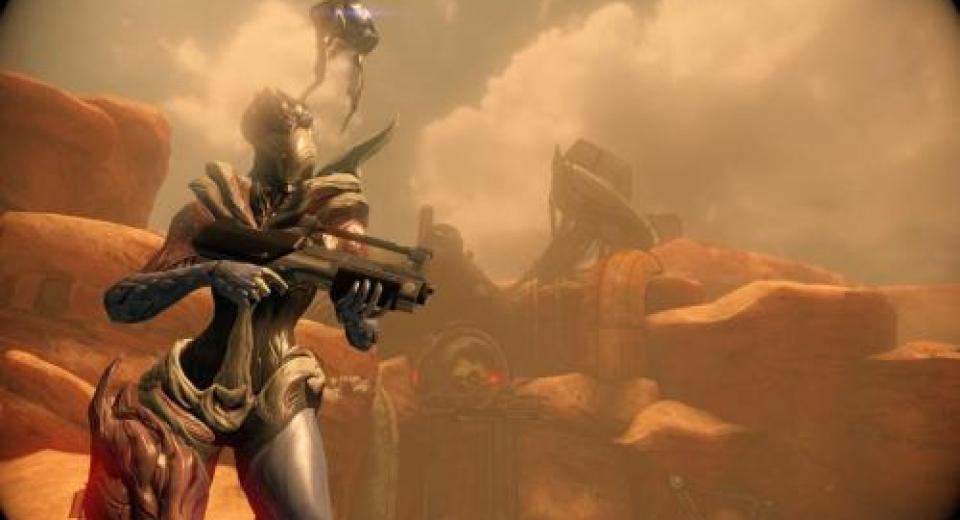 Warframe Video Game
“Press X To Ninja” prompts the title screen of Digital Extremes’ Warframe, setting the tone for a sci-fi co-op online shooter that pushes stylish melee and ranged combat firmly to the forefront of its design.
This is a fast-paced hybrid of gameplay systems found in the likes of Sega’s Vanquish or the online portion of Mass Effect 3, with missions accessed through a lobby system that brings to mind the original Guild Wars or Phantasy Star Online. It’s fast, free, disposable fun developed by a team that evidently values the feedback of its community; entire structural systems have been ripped out of Warframe since launch, and replacements developed to better suit a crowd willing to return time and time again.

As a result of those changes and some due diligence towards making combat as visually pleasing as possible, Warframe is already a free-to-play success story on the PC, hoisting itself into the Steam top ten at one point. As such, Digital Extremes’ Gamescom presence is entirely focused on their impending PlayStation 4 launch-day release; but why did they choose Sony over Microsoft?

“XBLA didn’t look like it was an option for a mid-size studio like us”, says Game Director Steve Sinclair. “We went to open beta on Steam in March, Sony took notice and asked whether we’d like to bring this to PlayStation 4”, he continues. “We asked whether we could update it every week. The answer was yes. Can we self-publish because we don’t want to get a publisher? Yes. Will they support the free-to-play model in a way we can utilise? Yes. So here we are.” Sony have been quite proactive in their support for free-to-play business titles then? “Absolutely.”

It’s little surprise that many of the free-to-play developers echo that exact same sentiment during my week in Germany, and although the hooks for true iOS-style micro-transactions don’t appear to be a part of the PS4 ecosystem yet, that doesn’t appear to be a concern for most. The ability to harvest a cross-platform player-base is also frequently noted as a reason developers are choosing blue rather than green for F2P projects, and in keeping with that sentiment, Sinclair is keen to point out that Warframe should be locked in feature and update parity with its PC cousin from day one. The core structure of Warframe is built around the idea of visiting planets and playing out missions either on your own or as part of a four-player group. The lobby system takes shape as several sprawling galaxies that unlock as players defeat bosses sprinkled throughout their varied forms, with each location tied to unique gear and materials that feed into blueprints for better Warframes and ordinance.

That crafting system replaces their original mechanic of paying to unlock level 15-plus content. “Our customers basically told us we were idiots, and what was interesting was that it was the paying players that were telling us the loudest”, Sinclair confirms. “They wanted the ability to play with friends, to see the same content with people that might only have limited time to sink into the game, so this is how we solved our problem. If players don’t have the time to invest, they can still drop $5 and get what they need right away through the crafting system, but they can’t min/max the game and they’ll still have to work to earn the coolest trinkets.”

The mechanics that see players returning to Warframe are largely centered around customisation and upgrades, and so the crafting system makes sense in a game that allows you to change not only your techno-ninja avatar but also its independently-levelled weapon loadouts and four assignable skills. On top of that, the team has also recently implemented an entire meta-game revolving around collectable cards that act as stat boosts; allowing players to tailor their combat proficiencies for specific missions and enemies. There are even ‘transmutations’ to take into account within that system, in which players can fuse cards together to create a unique, customised mod that isn’t available as a regular drop in the game.
Persona 5: Warframe anybody?
Jumping into the action for a moment, it’s impossible not to notice the PS4 controller. It’s hard to oversell just how much of a dramatic improvement the Dualshock 4 is over its predecessor, and my session with Warframe soothed any lingering doubt as to how shooters will play on the new console. The redesigned triggers feel accurate and tactile, the ergonomics are comfortable in the hand and above all it’s sturdy enough to withhold stresses and strains without that suspect flex and creak.

Although the button layout pretty much adhered to the Call of Duty standard for shooting and basic movement, Warframe is still very much a game about making players look as cool as possible, so knee slides and wall-running complement light and heavy melee attacks, while special moves are accessed with a quick swipe in any of four directions on the PS4 touchpad. Delving even further into the esoteric elements of Sony’s new Dualshock, select pieces of voice communication emanate from the speaker on the front of the controller; a design choice I suspect will be commonplace within the next few years. The level I played took shape as a familiar Mass Effect-inspired warren of alien-looking corridors carved directly into the rock of a remote planet, combining crate-infested outdoor areas with intimate sections that showcased the best elements of both physical and remote combat. The wave-based supply of enemies were bizarrely designed and stood out against their current habitat, with a bold art style that's seemingly unfiltered by modern AAA focused-grouped standards. There’s a pleasing amount of visual damage feedback too, although it’s fair to say that Warframe isn’t quite in Gears of War or Battlefield territory just yet.
In motion, Warframe plays well to its strengths.
There’s a natural flow to combat that sees almost all your available options brought into play frequently, and it quickly became second nature to sprint the couple of yards to close down an enemy with my sword or a special attack rather than just running for cover and reloading. This isn’t a game that wants you to hide (although it can be played that way) but rather to keep moving between groups, dispatching enemies with overpowered attacks and stopping only to check yourself in the mirror every once in awhile.

The benefits of playing with a co-op partner are also immediately apparent, as combining two space ninjas ramps up the destruction and healing power by a suitably silly amount. Left 4 Dead is an obvious reference point for the 4-player groups that make up the majority of Warframe’s playing parties, and Valve’s classic is mentioned several times by the two designers - unprompted - as we play. And with a few months left until launch, this PS4 build of Warframe is also surprisingly complete. There’s a certain looseness to the sword-based melee attacks that could be a little more tactile, but it’s fair to say the pace of the action masks that potential fluffiness fairly well. The native 1080p visuals are a match for high-end settings on the PC version, and although the frame rate is currently fluctuating between 40-50, producer Pat Kudirka confirms that the team is confident they’ll hit a locked 60 in time for launch. Indeed, taken as a whole, Warframe had some of the most convincing next-next-gen visuals and effects I saw all week, which bodes well for both the game and the free-to-play business model for which it flies the flag.

Although there are a whole clutch of similarly free and polished titles headed to the PlayStation 4 just in time for launch, Warframe is certainly a project with a level of potential deserving of a fair share of attention. Providing there are no development disasters in the interim, you’ll find a solid and stylish co-op sci-fi shooter available to anybody with a PSN account.
To comment on what you've read here, click the Discussion tab and post a reply.
Article Discussion