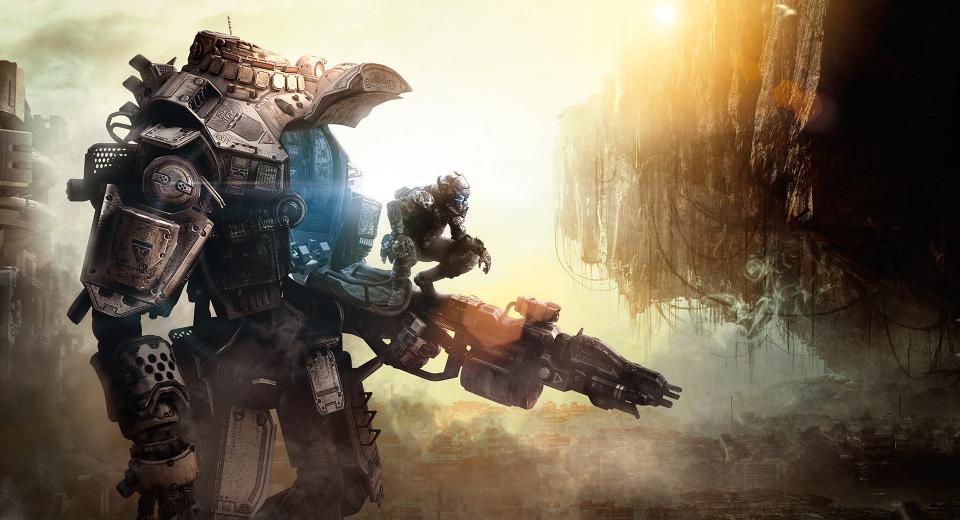 Titanfall Xbox One Game
Eschewing the live gameplay demonstration of Bungie’s incredibly beautiful Destiny for a moment, Respawn Entertainment’s Titanfall can justly claim to have captured the imagination of Gamescom 2013 with its combination of childishly-satisfying armoured robots and gravity-defying free-running that saw an entire map turn into a vertical playground for those that mastered its intuitive leaps and bounds. For me it was one of two huge surprises of the show, and looms large when mulling over the contents of a hectic week.
The Gamescom demo of Titanfall pitched two teams of six future-soldiers against each other in a traditional deathmatch peppered with AI troops. Each player sports a natty-looking jetpack that allows them to boost, double-jump and wall-run their way around pretty much any surface on the map, turning practically any building into a scalable platform from which to offer down leaded death to all and sundry below (or above).

I’d wager that verticality will take most players by surprise. My first game of Titanfall was haunted by the ghosts of shooters past as I ran between cover points, popped in and out of doorways and unleashed a few volleys at distant enemies, all the while oblivious to what was happening around me. Death followed death followed death from above, and it was only when climbing into my own Titan and peering over the rooftops that I realised exactly what I was missing (we’ll come back to those armoured beasts in a moment). Once you get the hang of the fact that the ground is basically your enemy in Titanfall, this becomes a shooter like no other. Free-running and double-jumping is gloriously satisfying, with an automated lock-on requiring you to simply point your body and jump towards whatever you’d like to traverse. Mantling, vaulting and clambering through windows or over ledges is an automated process but never feels too ‘sticky’, and movement is intuitive in a manner that instantly brings to mind a light and airy version of Mirrors Edge.
The gunplay meanwhile, is as smooth and tactile as you’d expect from the Call of Duty alumni behind the scenes.
Enemy soldiers drop with a couple of well-placed shots, with Battlefield-style visual feedback letting you know in no uncertain terms that you just caught somebody from way across the map. This Gamescom build has three classes of soldier to choose from and a selection of pistols, rifles and shotguns to play with, but given the nature of the future-tech on show, I’d have to suspect that a lot of the more esoteric weaponry is still under wraps. What’s there already feels accurate and solid, with a good sensation of force.

And then, of course, there are the show-stopping Titans. These hulking robots aren’t limited to a killstreak reward or piloted only by the elite, but instead can be accessed by anybody on the map according to an individual countdown timer for each player. Once you hit zero, simply pointing a cursor at the ground and pushing a button calls in your own Titan. A forcefield protects both mech and player for a few seconds as you mount your armoured companion, and after that all hell breaks loose as you scan the skyline for opposition soldiers and robots.
Piloting a Titan is as simple as playing any modern shooter, coupled with a quick 10-yard boost that’ll crush anybody foolish enough to get in your way.
Unlike the soldiers there’s no jump button or wall-running to contend with, so buildings suddenly switch from being platforms to necessary points of cover with which to shield your armour from ordinance heading in your general direction.

There are three classes of Titans to choose from in the current demo build, with each carrying a few unique abilities mapped to the shoulder buttons of the controller or a couple of keys if you prefer the accuracy of mouse and keyboard. The abilities on offer at Gamescom have mostly been shown in trailer form already, but catching enemy bullets and flinging them back is exhilarating when timed correctly, as is laying down a thick fugue of electrical smoke or shielding yourself from an incoming attack. Rockets, machine guns and grenade launchers are the offensive weapons of choice, easily accessed on either trigger or mouse button. The balance here has obviously been a priority for Respawn, and although powerful, Titans can still be breached and taken down by a lone soldier with enough skill. Get in close from above and players can rip the plating off the dome and fire directly into the engine to disable it, and three or four players working as a team can take one down with regular firepower alone. You still feel like a god when piloting one of those things, but the firepower of a Titan is rarely overwhelming, and the verticality of the level design constantly works in the favour of regular soldiers. Both sides present a unique challenge, and the playoff between styles should leave enough tactical room to keep almost any shooter fan happy.

Take enough damage in your Titan and you’ll have a brief moment to eject 60-70ft up into the sky, at which point you can steer yourself safely back to ground, onto a building, or - as with my favourite moment of any game I played all week - try and land directly onto the Titan that just took you down, tear it open and destroy it yourself.
It’s breathless, exhilarating stuff, and conjures the sort of feeling that should have thousands of players exalting in chatrooms the world over come spring 2014.
And given the state of a lot of Xbox One and PS4 games that folks were exposed to in Cologne, it was wise for Respawn to put their best foot forward with Titanfall and only show PC code in both public spaces and behind closed doors at EA. Although their developers are making all the right noises about 1080p/60 for the Xbox One version, it’d be wise to take any screenshots and gameplay footage with a pinch of salt until it’s clear what sacrifices are necessary to get the game running at that level on the Microsoft hardware. As it was however, the PC version looked solid even at this early stage, and it ran buttery-smooth throughout.

So in a week of alternating surprise and disappointment at Gamescom, the one overriding desire I have at the moment is to go back and play more Titanfall. I could have happily whiled away a couple more hours on that single level alone, while I suspect the nuance afforded to the player movement systems, the tactical headroom in the vertical level design and the Titans themselves will snatch a considerable amount more at launch. If you doubted whether the Call of Duty alumni could truly create rather than iterate, worry no more. Titanfall is hugely promising.
To comment on what you've read here, click the Discussion tab and post a reply.
Article Specs Discussion (16)