Mark Botwright explores the plus points for Microsoft at this year's show. 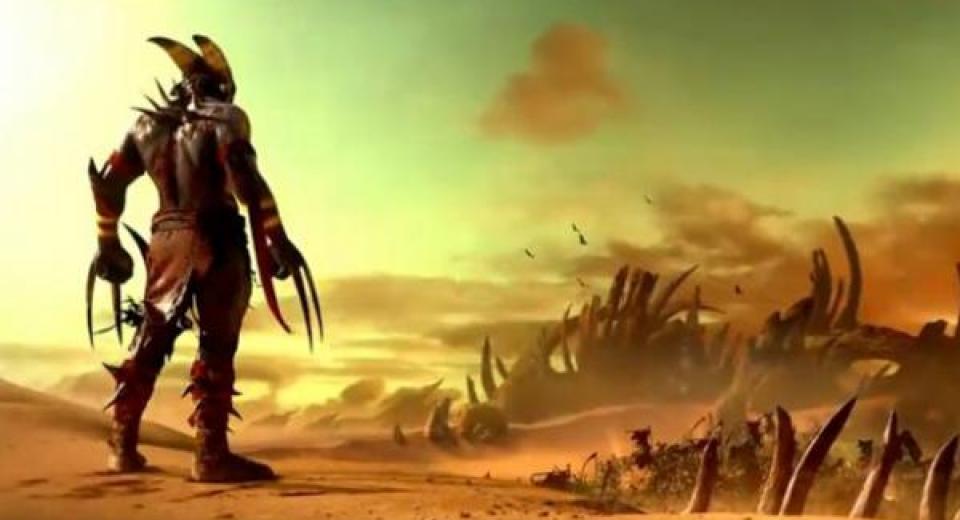 So, with the narrative of a console war firmly established, and the metaphoric boxing match now well under way, who’s landing the more meaningful shots in the latest slug-out?
Well, with the round one unveilings going Sony’s way thanks to the ambiguity of Microsoft’s stance on sensitive issues like DRM and always online, the Japanese company didn’t need to throw a punch; and round two, E3, following suit with a flooring blow from Sony thanks to the hardware manufacturer undercutting its opponent on price and the ability to play second hand games.

Round three in Germany, the gamescom convention, at least offered Microsoft the opportunity to settle. Having reversed just about every major console design decision that angered the masses - backtracking on always online, the necessity to install games and keep Kinect’s eye and microphone ever observant - the scene was set for something of a comeback, and on balance they probably won this latest head-to-head. Going first, as the Redmond firm did at E3, could have laid the ground with numerous banana skins. The not so small matter of the console’s release date seemed the most obvious to negotiate. Whether you believe that Sony was willing to radically change the PlayStation 4’s price post-Microsoft conference at E3 in order to gain an advantage is unimportant, what matters is that they had the opportunity to do so. Those orchestrating the Xbox One hype machine have clearly gone back to consult the book PR For Dummies and learnt an important lesson from the torturous days after the One reveal when questions were swirling and the lack of satisfactory answers allowed for consumers to fill in the blanks with their own hopes or fears.
If you can’t promise it, say nothing.
There was no release date for the One given at gamescom, at first glance that’s another footshot, but it highlights a savviness that was unforthcoming in the press releases and interviews back in May and June. If you can’t promise it, say nothing; under no circumstances hint and let tongues wag, beginning the process of hamfistedly skirting around previous answers and desperately trying to remain consistent. Say nothing and give yourself some degree of latitude. Some may feel it was a sign of a company unprepared for launch, and the scaling back of the number of countries that’ll receive the One this year supports that, but it was a smart move nonetheless.

The news pre gamescom that the Kinect peripheral - so long derided by the core crowd as unnoteworthy and viewed with suspicion by the “1984’s coming true” tinfoil hat brigade - could in fact be unplugged would only further cement the sound footing Microsoft has found, managing at last to marry up the message to be conveyed with the product they’re offering.

But hardware aside, what of the games? Well Sony went all out to emphasise their indie credentials, highlighting a further host of titles that’ll arrive on the PS4 and why they consider themselves the best home for future small development studios. It was impressive, but even with the developers themselves providing a running commentary of superlatives about the console manufacturer’s collegial stance, and some exciting prospects like Hotline Miami 2 or The Chinese Room being name-dropped, the phrase that arguably defined the love-in was “exclusive debut”.

In terms of excitement, for anyone planning on nailing their colours to the mast and going for only one next gen console, there’s a huge drop off in hype for that phrase between the first word and the last. Even with Microsoft being portrayed as the Cruella De Vil of digital publishing - making coats out of indie developers’ hopes and dreams - the truth is that most games will find a home on both consoles anyway, and for those willing to wait, the experience will likely be indistinguishable.

Sony’s show was impressive though, the Vita getting a much needed price cut and the token nods to what the PS3 still has to offer, but if you were of a cynical mindset, and already starting to tire of the supposed "Sony hearts developers" pseudo-narrative (let's face it, it's console war jargon dressed up), then the LittleBigPlanet hub might have brought a dose of reality to proceedings. A free service that appears a parting gift of kindness but bears all the hallmarks of a micro-transaction model, offering users the “access to buy” the building blocks to let their imaginations run free. The game will no doubt be great, but it re-emphasises the fact that this is business, and no matter how slick the PR or how artistically merit-worthy the creations housed on any machine are, the bottom line is to make money. The playground show of good guys and bad guys is sliding away and we can finally get back to looking at games.

Sony’s impressive light show and use of fan favourites Shuhei Yoshida and Mark Cerny was slick to the extreme, however the story of indie-friendly and trustworthy figures set against a neon backdrop increasingly looked like the final salvoes from an onslaught designed for E3. The story has shifted since then though, underlined by the lack of genuine exclusivity of practically any indie game on the PS4, coupled with Microsoft’s back pedalling on self publishing and charging fees for updates. The last dig by Andrew House, that Sony remained a company that kept consistency in their policies felt cheap without the backdrop of consumer outrage still fermenting, and the polite European crowd was never likely to greet it with the rapturous applause the slightly pausing delivery indicated might have been expected. There was no knock out punch either, the show-closing revelation of the unexpectedly cheap (well, relatively) price at E3 was sadly not replicated by the announcement of the release date.
November 29th for Europe was at the tail end of expectations.
Announcing fifteen new PlayStation 4 games was impressive, but the caveat being “all exclusive at their console launch”, once again highlighting how hard it is to gain ironclad exclusivity when a studio’s very future may depend on going multi-platform. With the indie cup overflowing, and nothing new in terms of Triple-As, the surefire journalist crowd pleasing announcement of a new Shadow of the Beast was wheeled out. Destined to resound with anyone who fondly remembers the Amiga, once nostalgia ebbs away there’s little indication that it’ll update well, as the violent trailer showed why many games of yesteryear are best not re-imagined with modern aesthetics.

If Sony’s conference was the weapon created to fight a war that’s moved on, then Microsoft’s was a black ops sortie, remaining under cover and only knowable by the aftermath. Not streaming it in the now arbitrary manner was a masterstroke, subtly offsetting the chance that the narrative would be dictated by the core crowd commentating as it happened and setting in stone the terms of reference that it could be defined by. You could view the video later, but it was small scale and intentionally personable in tone, foregoing flashing lights and anything that evoked memories of E3 in favour of a precision half hour in an informal arena.

Microsoft stuck to hitting a few key targets, and the sense that they’ve got the better retail game launch line up is starting to gain momentum. It was easy for Sony to win E3 almost by default thanks to (somewhat) non-gaming issues, but relying on Killzone: Shadow Fall as the big hitter on launch day will start to come under increasing scrutiny the closer we get to November; and looking to the longer term sci-fi shooter battle, it's gorgeous but it doesn't carry Titanfall's invention or pedigree. Sony letting slip that their first party studios were working on titles was hardly news, as it was to be assumed for both console manufacturers. In comparison, Forza 5, RYSE and Dead Rising 3 begin to look positively plentiful; few buy new consoles wanting to play multi-platform titles, and in the exclusive content battle, Microsoft’s FIFA and CoD combo will likely take the populist vote over Sony’s similar deal for Watch_Dogs and Assassin’s Creed IV.

Bundling FIFA in with all One pre-orders and adding exclusive content (note, not “timed”) may be deemed a money-infused cheap shot at gaining traction, but it’ll work. The Kinect tax levied on your next gen console of choice suddenly drops from £80 to circa £30 (assuming you planned on buying FIFA), a byproduct of which should be less venom aimed at the peripheral, which it should be noted was tentatively plugged by reminding people that Rare will be behind the new Kinect Sports Rivals. Shifting the emphasis on peripherals, from intrinsic devices that’ll revolutionise your world to additional gaming options, was also wise. Even SmartGlass got the gentle nudge it needed - via a demonstration of its uses in Tom Clancy’s The Division - to possibly pique interest but not scare off consumers wary of being promised too much only to write it off as worthless marketing speak. The mention of further bundles indicates that it has been accepted that consumer decision based solely on perceived value is a battle currently being won by the PlayStation 4, but that was thanks in no small part to the loss of the PS Camera; news that the augmented reality title The Play Room (a game designed around the peripheral) will be downloadable for free looks like an attempt to pump life into a device/game combo that’s already been thrown under the bus.

Most importantly, by finally going public with allowing self-publishing on the One - and going beyond by highlighting the other benefits on offer - it allowed Microsoft to pre-empt Sony’s ambition to be seen as the only choice for smaller scale gaming releases. You have to wonder how many titles showcased by Sony might have otherwise been PS4-only.

The ability on the PS4 to have your own music in the background will be a godsend, but the few extra titbits from Sony, like teaming up with broadband providers, intending to make Music Unlimited better and not putting Twitch live streaming behind a paywall were arguably distraction features; the potential to be solid additions, but in their present untested state unworthy of praise or criticism, the likes of which would’ve been derided during the One unveiling. It still seems odd that we have no release date, but if gamescom’s victor was decided solely on adapting, establishing a message and making it marketable, then Microsoft finally found its feet.
To comment on what you've read here, click the Discussion tab and post a reply.
Article Discussion (10)