Manny Brown gets hands on with the latest in the series on the PS4. 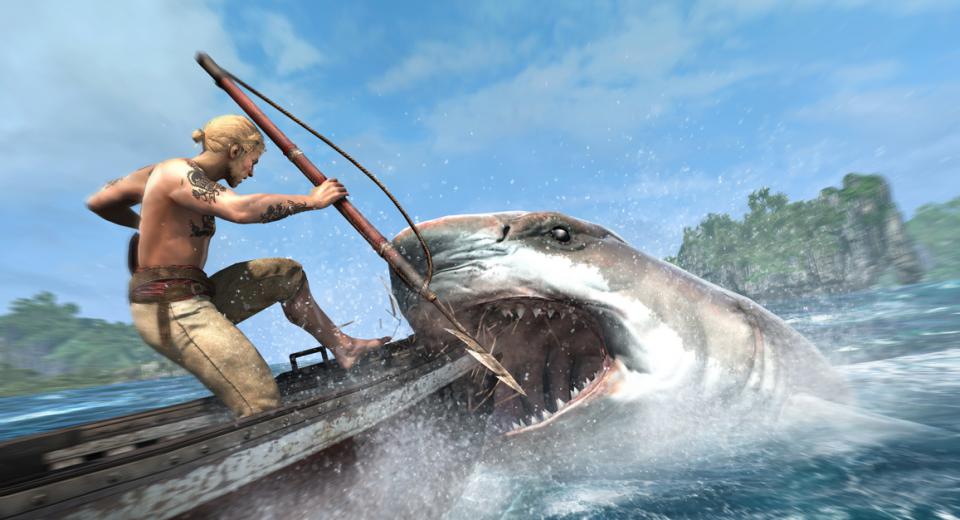 Assassin's Creed IV: Black Flag PS4 Game (2013)
SRP: £44.86
Quite aside from naval warfare, Welsh pirates and my first experience with the PlayStation 4 controller, the one overriding memory I’ll take away from Black Flag is that there’s no more Desmond.
It’s a piece of information that I’d registered but not had time to properly digest until playing through an hour of Ubi's latest, which is set far, far away from the overwrought drama that reached a long-overdue conclusion in Assassin’s Creed IV.

Taking to the seas with the boisterous Edward Kenway and his pirate vessel the Jackdaw, it’s hard not to see this as a fresh start for the franchise. Gone is the city-countryside-city gameplay loop that characterised everything from Assassin's Creed II forwards, and in its place is a huge open landscape that condenses the Caribbean sea into a gigantic but easily-navigable area. This is no Wind Waker however, and pulling up the map reveals hundreds of breadcrumb trails leading to diversions on land, sea and even beneath the waves. Given a handful of Black Flag’s chief environmental designers came onto the project after completing Far Cry 3, that density of gameplay should probably be no surprise. My time with the latest PlayStation 4 build showcased the three main pillars of the franchise: assassination missions, naval combat and free-roaming exploration.

The assassination mission was first up, though I’ll avoid any storyline details for fear of potential spoilers. Beginning in the jungle, Edward was tasked with navigating his way past (or through) a series of guards and making his way through the treetops towards a beach strewn with huts and further patrols. From here, it’s down to the player as to whether to skirt around the danger, plough straight through with sword and pistol or simply make a run for the ship that contains the primary assassination target.

Unsurprisingly, there are a number of ways in which to do this, and I tried (and failed) at the majority of them before manipulating the stealth mechanics to my advantage to dive off the ships rigging and strike a mortal blow to the captain.
It’s familiar stuff.
Kenway controls in a broadly similar fashion to that of previous protagonists, the tree-traversal mechanics are ripped straight from the previous game, and although there are a smattering of new combat animations and hidey-holes (including a few gloriously silly double-kill sequences), it’s difficult not to make comparisons to Assassin’s Creed games of yore. A fresh start in storyline Black Flag may well be, but its core mechanics remain resolutely tied to Ezio, for better or worse. Next up was the overhauled naval combat; which promises to take the best parts of Assassin’s Creed IV’s ship-bound adventures and expand their scope considerably as Kenway makes his way from island to island.

The first thing that strikes me here is just how beautifully detailed and packed with content those oceans are. Islands and small rock formations pepper the seascape alongside other trade and combat ships going about their own business, and in true Far Cry 3 style, everybody seems to have their own agenda. A full-scale naval battle kicks off on the horizon as I'm admiring the scenery, and that was just one of many procedurally-generated incidents that dotted the map as I piloted the ship in its new fast-travel mode.
These oceans feel alive, and on balance, the time I spend at sea is the most impressive of all Black Flag's gameplay hooks.
When it’s time to get down to combat, the controls of the Jackdaw again felt considerably familiar. Positioning your ship in relation to both enemy vessels and the occasional tidal wave are still key skills to get to grips with, although the expanded weapon loadout does help to target specific vessels from all directions. A new mortar-style aiming system lends the long-range weaponry a needed dose of skill, whilst other new ordinance includes a forward-mounted cannon and depth-charge style barrels that can be dropped to hamper pursuing vessels.

It’s all highly upgradable and customisable too, with the developer revealing that IV's crafting system is returning, overhauled and hugely expanded. Once I’m done taking down a bunch of enemy vessels, I’m left alone with Black Flag to simply explore - albeit with a bit of prodding from a developer keen to show off his team’s handiwork.

Although this is the first game in the franchise to be entirely open-world, it took me a little while to appreciate what the team has achieved. A raft of new animation seamlessly blends Kenway’s transitions from boat to ocean to beach, building or any combination of the above, and when you realise the scope and breadth of the content on offer it’s a little difficult not to feel daunted. There are tiny villages with bars, shops and their own inhabitants to discover and explore, a huge raft of collectibles to go after (many with more tangible benefits than previous games), and - most promisingly - a handful of ancient Tomb Raider-style temples to conquer.
And of course that’s before you even begin to explore the cities.
Although I only stopped off in each one for a few moments, Havana, Kingston and Nassau appear as fully-realised as any of the locations in the previous games, with their own unique sense of style and architecture that marks them apart from the rest of the world. Climbing to the top of towers and cliffs still affords Kenway the ability to uncover fogged-out portions of the map and eagle-dive into hay bales below, and one of my favourite moments came when I discovered that ability also now applies to structures surrounded by water.

Well, it was a tie between that and the AI bug that saw a procession of soldiers moonwalk through a ship and into the sea anyway. Authentic Assassin’s Creed this most certainly is. That’s a lot to be excited about then, and although the mechanics remain solidly rooted in previous entries, the world, its lead character and its inhabitants are all a huge breath of fresh air. This PlayStation 4 build was well-suited to the qualities of the new Dualshock controller, and although it may have been a little visually underwhelming in comparison to the PC versions of previous games, we’ll need to wait and see what the final optimisations hold in store before passing judgement on Black Flag's capacity to impress.

Make no mistake though, this is a richly detailed world filled with blue skies and green isles ripe for exploration, which is exactly the right course to chart for Ubi’s flagship series.
To comment on what you've read here, click the Discussion tab and post a reply.
Article Specs Discussion (1)