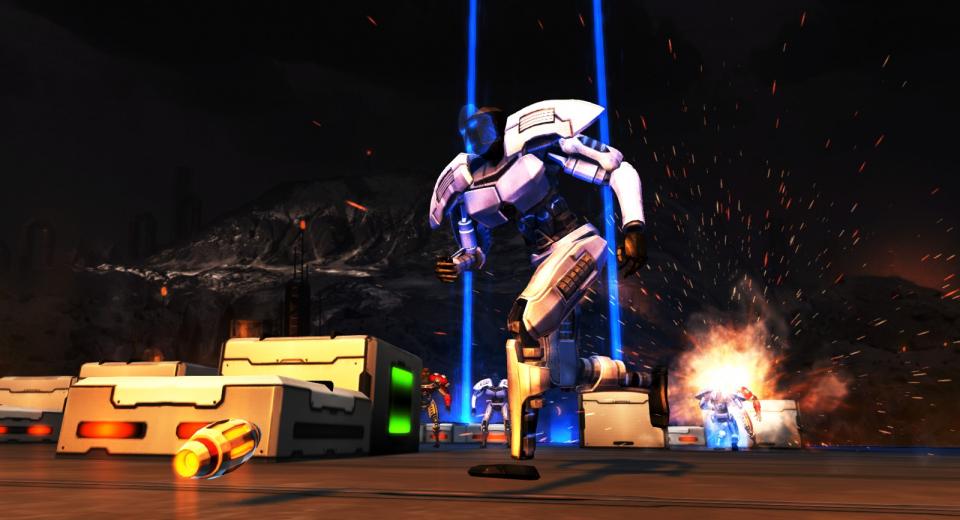 “Angry Chess” is the term by which all my non-NFL loving friends have come to know the game of American Football, and I suspect if they ever saw a game of Frozen Endzone played out, they’d cite it as ultimate proof they were right all along.

Even though it’s set in the future, populated by large robots and played on rectangular pitches home to glowing point markers and more crates than your average Counter Strike level, this is a game that revolves around the core essentials of chalkboard play design in American Football. It’s a game of compelling tactical possibility and route planning, with weaknesses to exploit, opponents to psyche-out and dramatic recoveries to manufacture, whilst its moments of robot-on-robot collision pave the path to victory or loss with no small amount of drama and depressing humility. Viewing each of the futuristic arenas from above, your task is to lead a team of five machines to victory against either AI or human opposition in a series of synchronised turns, with each of your players governed by stats that dictate their speed, ability to block, accelerate, catch and intercept. Taking those abilities into account, your role involves right-clicking on the map to set waypoints and pauses for their movement, each of which needs to be considered in terms of a broad team strategy to block the opposition or supply sufficient cover during running plays, to work in a series of twists and turns before passing the ball to your receiver, or simply out-guess the opposition and cover passing lanes or running routes when playing on defence.

Angry futuristic chess.
When you click “Prime” and enter your turn, you get to watch your actions play out against the opposition’s programmed routes until something significant occurs (the ball is caught, fumbled, somebody goes out of play, collision occurs, somebody scores, etc). The game is then paused and the next turn begins, allowing for the editing and tweaking of waypoints, fine-tuning and reaction to unexpected movement. Catching, blocking, tackling and interceptions are all automatic and triggered according to each player’s (visible) zone of influence, with individual stats and positioning determining whichever robot emerges successful.

That might seem limited, and in truth my first few games of Frozen Endzone were spent searching for controls to duke or spin away from defenders. It's a different beast to real-life NFL though, and the emphasis is placed firmly on the macro here. Team patterns and strategy are everything, while micro-management of one-on-one encounters simply isn't a consideration beyond the stat matchups. Maybe that'll change, but Mode 7's remit seems to be to push away from Frozen Synapse's fiddlier controls and offer something streamlined and faster-paced; that's definitely the case here. If you have already played Frozen Synapse however, the core turn-based concepts and waypoint planning in Frozen Endzone will be very familiar. The interface is smooth, simple to understand and easy to get to grips with, although could do with a little more separation when several robots are grouped together.

And players will come together, mark my words. In order to force conflict and ensure each match is action-packed, Endzone also replicates Synapse’s suite of full-height and half-height cover (this time with crates dotted around each arena, instead of walls), creating natural routes and lanes through which play generally funnels. Players are able to pass the ball over the half-height crates but not their larger siblings, whilst neither can be vaulted. Several glowing squares also litter the arena, offering an extra point should the ball-carrier pass through them. Those are tempting to aim for when on the losing end of a high-scoring game, but potentially fatal as they're the most obvious targets for the defence.

Despite the relative paucity of offensive controls, Frozen Endzone feels balanced and, crucially, playing on defence is a whole lot of fun. With careful consideration you can work out roughly which opportunities are available to your opposition quarterback in any given situation, and either blitz their favoured positions or else try to best cover their likely moves. Interestingly in the games I played, I was also able to work out the personality traits of some of the opposition, and it’s those golden moments of anticipation that provide the most satisfying plays.

If you can work out where your opponent will run, it's extremely satisfying to move your strongest tackler into his path and watch any one of the brutal contact animations. Follow it up with a quick one-two pass down the field and you've got yourself a score that even non-sports fans will enjoy. That's a key facet to nail, and hopefully one that'll ensure that Endzone isn't just enjoyed by those of us with a predilection for the real thing.

Playing offence is just as entertaining once you let your creative juices flow. I’ve seen all sorts of ridiculous passes and clever runs, and been surprised by the range of passes and runs more often than not. There are restrictions in play that mean the ball-carrier can’t pass backwards or move at all if they want to pass the ball again (adding a necessary element of structure to aid defensive efforts), but the most interesting plays often utilise a criss-crossing pattern of deceptive dummy runs and several quick lobs before hitting a route that’s avoided being telegraphed.

When your own plan comes together it’s a beautiful, beautiful thing. Frozen Endzone is compelling to play even in its current early phase then, and when you manage to find a live opponent (entering turns in real-time) it has the type of hook that keeps you wanting to manoeuvre your robots and try new playbook patterns until late at night. The synchronous turn-based design also makes it convenient for short bursts, and as play can be suspended and picked up at any stage via email notifications, it's the sort of game you can stretch out for days at a time, dipping into each match and playing a handful of turns whenever you get five minutes' spare. For those of you with limited time to delve into the strategic side of PC gaming, Endzone is the sort of quick fix that I could see easily taking its place alongside something like Blizzard's Hearthstone.

With the basic gameplay refined and polished in its current form then, does £18.99 on Steam's Early Access service represent good value? I’d say the answer is a positive yes if you’re interested in online multiplayer, but maybe wait a few months if you’re looking for something similar to Frozen Synapse’s story-driven campaign. At the moment you’re getting a game with fully functional online gameplay, email notifications, leaderboards, chat, limited squad customisation and a basic arena editor, along with offline skirmish battles against a series of increasingly difficult AI opponents. The singleplayer story-driven content - which Mode 7 are promising will take the form of a lengthy rags-to-riches tale of a sports franchise - is likely to be patched in before their projected release date at the end of 2014.

If it's as strong as the Frozen Synapse campaign, the singleplayer content will certainly be worth waiting for, but the real heart of Frozen Endzone will likely be its multiplayer leagues and ladders, and it'll be interesting to see the direction the game takes in the run-up to a full launch. Mode 7 is definitely onto something here, and much like their previous project, this is a turn-based strategy game with few direct comparisons. Over the course of the weekend I racked up over 10 hours fiddling with routes, passes and blocks, and truth be told I can’t wait to finish this and get back to it. The Early Access floodgates will have opened, and it’s time to test a robotic Flying V.