From the Forums: DIY Home Cinema - A Ten Year Journey

Putting the Up into Upgraditus 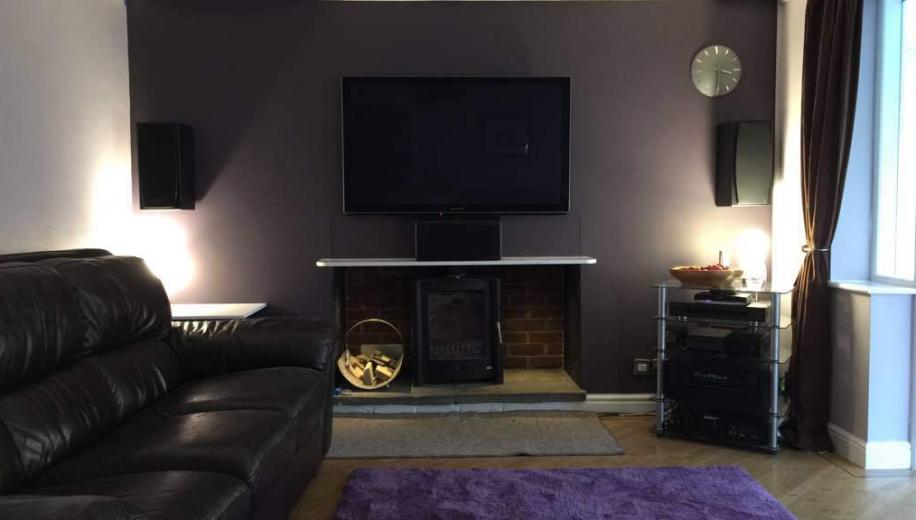 Our member, Jazz Monkey, has been gracing the forums for over 10 years and he’s been a stalwart contributor to the Home Cinema Showcase section for much of that time.

As such, that gives us the opportunity to provide a photographic documentary of the evolution of JM’s home cinema, which is set up in the living room; and it’s quite a journey, not least because Mr Monkey takes a pretty mean picture.

It was way back in May 2005 when Jazz first moved in to the property and, with no little degree of foresight, he actually took some pictures of how the room looked at that time. We shan’t pass comment on the décor but clearly there was some way to go before this could be deemed a home cinema room. The kit-list back then consisted of a solitary 32-inch Panasonic PF10 TV – oh how that changes as we move down the page!

Some four months on and there are already some fairly drastic changes; the 32-inch TV has been replaced by a 42-inch Panasonic PV500 plasma, which cost £2,300, a sum which could net you a 65-inch 4K HDR capable telly in the here and now. There are also movements on the audio front with the installation of a discrete, Bose Lifestyle 12 system. Let’s fast forward to January 2010 and the plasma is still going strong but there has been a significant upgrade to the sound, courtesy of some Monitor Audio speakers, an Onkyo AV Receiver and a new Blu-ray player. You also may notice a new Firebelly stove, an Xbox 360, new flooring and a rug.

This is when the upgraditus really took a hold; enough of faffing around with these paltry TVs – an ill-fated spell with a Panasonic V10 with rising black levels didn’t help – and it was time for Jazz Monkey to dabble in the world of home cinema projectors. In goes a 106-inch screen with a Sanyo Z4 projector and, wham, he has some really big images to enjoy.

But the larger screen meant the centre speaker, which was sat on a shelf above the fireplace is now being obscured – and thus performance lessened – so the shelf is lowered and there’s also a new pelmet in place to hide the screen when not in use. It’s looking much tidier now.

The Sanyo was replaced by a Panasonic AE3000 but that didn’t last very long so, by November 2012, Jazz was the very proud owner of a JVC X30, which he described as a ‘big upgrade.’ There are also some major audio improvements made by the addition of a MK SB1250THX subwoofer, an Onkyo NR-818 AVR and an Oppo 103 Blu-ray player.

We’re now moving in to 2013 and things continue to gather pace in the living room. There’s a new sub – already Jazz? – in the shape of an MK MX-350 MkII and there’s a Darbee Darblet Processor in place, which he loves. There’s also the addition of an Xbox One, some Philips Hue lighting and a new Harmony Smart control and Ultimate Remote system with which to tie it altogether. Oh, and there’s a new screen, too, with a 98-inch Draper React 2.35:1 (with Sesame case) in place. Blimey So what did 2014 bring? Oh, just a JVC X70 an Oppo 103D with built-in Darbee – that’ll help with keeping the cables tidy – and MK10 sub plus a couple of Buttkickers to really add some oomph. Jazz also sensibly decided, that with all this top class kit, he should get it treated to a professional calibration. That also led to the addition of a Lumagen Radiance Mini 3D to eek out the very last drop of accuracy. You would have thought that would have been more than enough for anybody but, no, it didn’t stop there. There are new speakers with the fabulous XTZ Cinema series put in place, there’s a new projector in the shape of a Sony HW40 - which gives some added brightness over the JVC – and of course it will be getting calibrated once there’s enough hours on the lamp. So, let’s finish off with a couple more snaps of Jazz Monkey’s finished home cinema room. When we say ‘finished’ we are joking, of course, and we fully expect there will be updates to the thread in 2016; if not before.